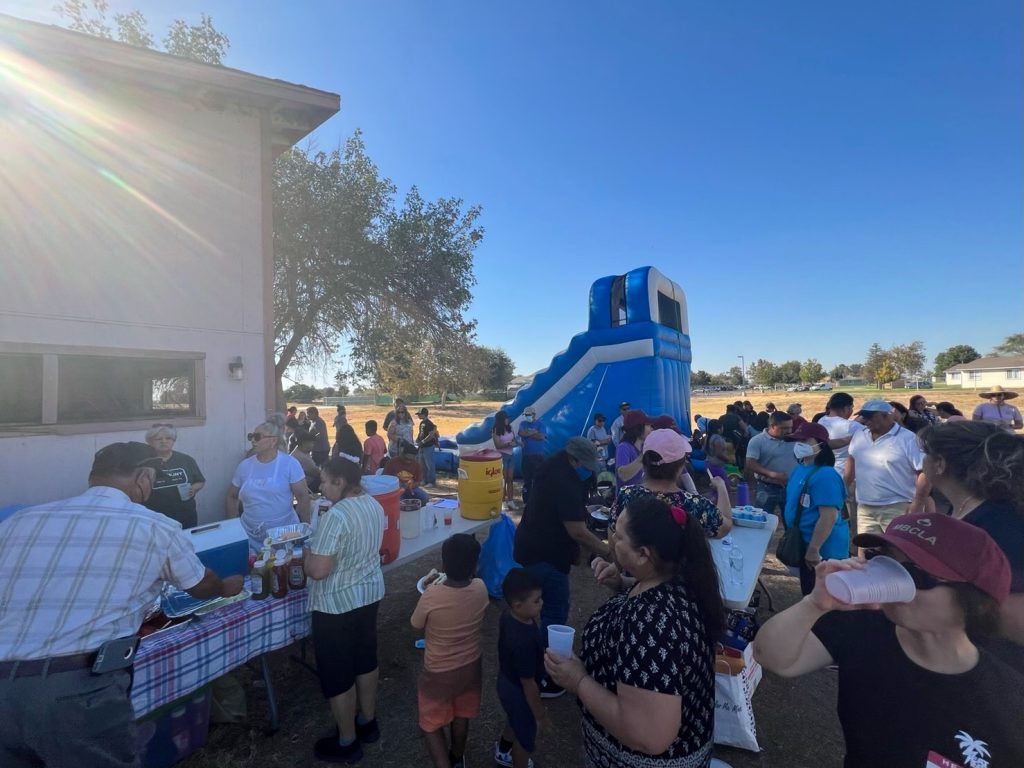 BAKERSFIELD—Volunteers from two Central Valley churches and one Southern California church hosted a multicultural block party for migrant families in Bakersfield on Aug. 27.

Members of Harmony Missionary Baptist Church in Lamont, Mountain View Southern Baptist Church in Lake Isabella, and Mandarin Baptist Church of Los Angeles in Alhambra came together to host the festivities designed specifically to support families with children by providing backpacks, groceries, and family-friendly programming with a gospel presentation that encouraged parents to embrace their role in influencing the next generation.

Antonio Castaneda, Spanish adult director from Harmony Church, preached a short and practical sermon entitled “Taking Your Kids to the Lord.” Looking to Old Testament models, Castaneda said, “this generation is growing up without knowing God. They don’t know where to go and find refuge.”

Ed Garza, pastor of the Harmony congregation, shared that many migrant workers bring their whole families to live in these state-owned housing centers from March through October. Traditionally, each housing center has an end-of-the-season block party, but these festivities were explicitly designed to help the children launch successfully into a new school year.

Garza, whose church has been supporting migrant workers in this region for 15 years, said they started out by helping Valley Baptist Church in Bakersfield but took over the ministry a few years ago.

“Because of our partnership with the Convention office, we are able do this every year. We want to share the Word of God. There are a lot of kids and generations who don’t know Jesus. This is a good way to get the word out. CSBC provides funds and backpacks, and then our people at Harmony church buy and assemble all of the other supplies to fill the bags.”

He boasted that the involvement from the Mandarin congregation resulted in additional funds allowing for a waterslide for kids and a mobile restroom.

Annie Yang, a member of MBCLA, first heard about migrant ministries at the Southern Baptist Convention Annual Meeting in Anaheim in June when she spoke with Francis Chung, CSBC’s Mission’s Initiative Team leader, who connected her with Oscar Sanchez, CSBC migrant ministry specialist.

“If churches want to get involved with missions this is a good way to be a witness and share the gospel,” Yang said.

According to Yang, 14 people from the MBCLA made the two-hour drive for the block party.

“The pandemic made us focus inward but now we can focus outward. Since right now there are no overseas missions, this is a way to reach out to our Spanish speaking community.”

Besides funds to support the party, MBCLA members provided Chinese food, including egg rolls, fried rice, and chow main, which Yang said was “just for fun.” Although there were hot dogs and hamburgers, “the Chinese food went first,” she said.

Anthony Hughes, missions chairman at Mountain View Baptist Church in Lake Isabella, shared that his church has been partnering with this ministry for four years. He expressed gratitude for the various churches that participated in the event and said it represents “the body of Christ really coming together. It’s like Revelation 7: 9 – with the Chinese church coming out and representing in partnership with the English speaking and Spanish speaking churches.”

Hughes added, “Our church gives to the California Mission Offering. It’s a valuable ministry opportunity. In fact, every Sunday our church designates 5 minutes to talk about missions. We especially love the feature stories about Feeding Those Who Feed Us in ‘This Week at CSBC.’”

Eddie Martinez, also a church member at Mountain View and a first-time volunteer, said he came to see and help at the event. Martinez said he was excited because “we want to talk about God. I want to tell people how God changed my life because God is good.”

Plans for next year’s celebration are already underway. According to Yang, “Since this was our first time, we started with a small-scale effort but even so, this was exciting! We sang in three languages!… and we are already planning for more next year because there were so many children. Maybe next year we can have game booths and comic-book Bibles.”

Yang noted she would recommend migrant ministries to other churches because “this is a low pressure setting with lots of good energy. We are encouraged, especially because we’ve been idle for a few years. Normally our church is very active in missions but this year, because of the travel bans during the pandemic, there’s been nothing. But you know what? Los Angeles is a mission field.”