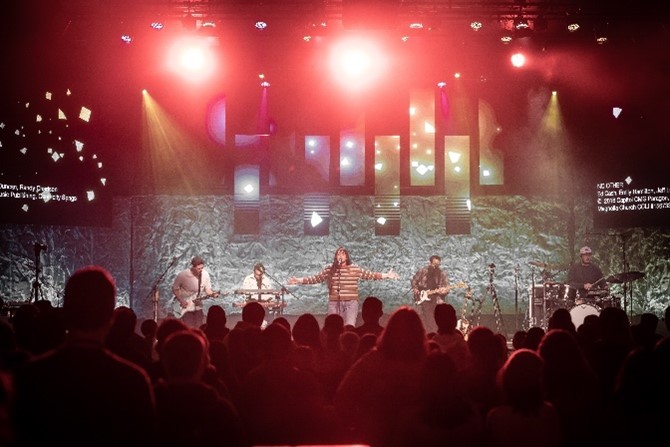 50 Students Made Decisions at Ignition Conference 2022

After a year break due to COVID restrictions, California Southern Baptist Youth assembled for “Ignition,” CSBC’s annual State Youth Conference at Magnolia Church in Riverside on January 21 – 22. This year CSBC joined forced with Student Leadership University to bring the Lift Tour to the west coast. RJ McCauley, youth pastor at Magnolia Church and CSBC’s state youth liaison, has been revisioning the gathering away from an annual conference to “a youth movement,” challenging students to use their unique circumstances and skills for the kingdom. “If you don’t have non-Christian friends, get some!” McCauley declared from the stage. “How else are they going to hear about Jesus?!”

As the doors opened, DJ Bobbito the Chef turned up the volume and students responded, immediately filling the aisles with dancing.

Worship was led by “For All Seasons” and D.A. Horton and Jeff Wallace were the two primary preachers.

Wallace and Horton led students through the story of Abraham in Genesis showing attendees the importance of listening to God, trusting God, and following Him even when circumstances don’t make sense.  Students were encouraged to trust and celebrate God’s provision in Christ.

In the final sessions, students were faced with the paradigm shift from what once seemed impossible to possible through God’s great redemption story. As a result, students flooded the alter in faith to accept God’s call on their lives.

On day two, in between the main sessions, students were invited to attend breakout sessions hitting relevant issues for today’s youth such as: Identity, Anxiety, Biblical Truth in an LGBTQ+ world, Evangelism and more.

Jason Blankenship, CSBC Evangelism Team leader called the event “A success in every way we can measure.” While it is believed that COVID kept a few churches from attending, CSBC is rejoicing over the 518 students who were on site and the hundred+ who watched online. We are also celebrating as 50 students made public professions over the two-day event, two of which who were online decisions.

Be sure to check out posts on Instagram and Twitter as social media buzzed under the hashtag #LiftTour22.

CSBC is planning to host Ignition at two locations in 2023 to accommodate churches throughout the state. Be on the lookout for details in the months ahead.