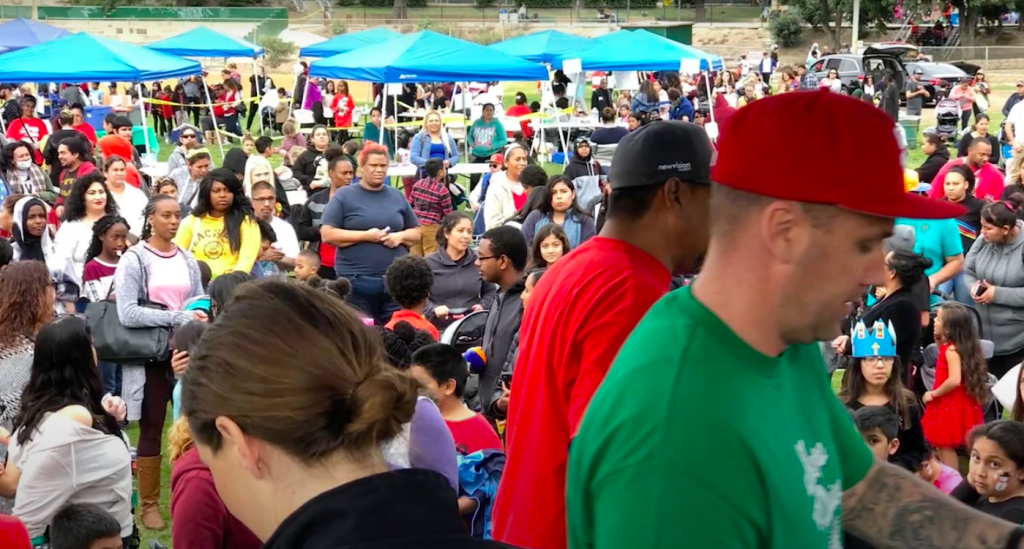 As New Vision Church in San Diego gives away thousands of toys to children each Christmas, it’s “not about the toys,” insists Sean Beaudoin, outreach, life groups and connections pastor at the church. “That’s not the gift. The gift is the hope that we bring through the gospel of Jesus Christ.”

For the past five years, Beaudoin has organized and conducted a toy drive in Southern California, first at Meridian Southern Baptist Church in El Cajon, where Rolland Slade serves as senior pastor, and for the past three years, at New Vision Church, founded by Lead Pastor Pete Contreras.

Beaudoin credits both pastors for their unwavering support of the toy drive. “If it weren’t for them, we probably wouldn’t have the toy drive,” he said.

Through this outreach effort, thousands have heard the gospel message, with many making professions of faith in Jesus Christ, being baptized and joining a local church.

The first toy drive in 2015 in El Cajon attracted about 170 people, with 61 professions of faith.

In spite of the initial positive response, Beaudoin knew there were so many more people to be reached.

After that first toy drive, he and his wife made a few tweaks to the outreach event, which included a new name: HOPE (Helping Other People Everywhere) Toy Drive.

In 2020 the toy drive got another name tweak; it became the HOPE Toy Drive-Through, because pandemic regulations wouldn’t allow large numbers of people to gather in person. On the weekend before Christmas, cars in two locations lined the streets for “block after block after block,” with eager children waiting their turn to receive a gift. As participants moved forward in their cars, they could tune into an FM radio station to hear sermons and testimonies.

Once the cars reached the toy giveaway point, volunteers, donned in masks, gave a gift to each child as well as gospel tracts and Bibles to adults. Often, volunteers prayed with those in the cars.

One 2020 Hope Toy Drive-Through participant posted on social media: “You’ve truly made a generous and spiritual impact on our lives.”

Each year, individuals who have had their “lives transformed” by the previous year’s toy drive, find themselves among the 300 or so volunteers it takes to pull off the toy drive, Beaudoin said. Also, many people who have made professions of faith and connected with New Vision Church through the toy drive now serve in many areas of the church, he added.

Beaudoin has found ready, perhaps unlikely, partners throughout the community, including the cities of San Diego and Lemon Grove, as well as local schools, businesses and law enforcement. Local television news stations also have provided numerous feature segments on the annual toy drive.

“We couldn’t do the things we do to fulfill the Great Commission without them,” Beaudoin said. “We can do more together.”

“What I really like about New Vision’s outreach is that they present the gospel as they provide toys.” he said. “I love their intentional gospel-centered focus!”

For the past two years, funds from the California Mission Offering have helped underwrite toy drive expenses.

“Our mission is to empower the vision of the local church,” Blankenship said.

“When a church has a plan and strategy, but a financial need to accomplish that strategy, there is no better use of CMO gifts than to help the local church reach its community with the gospel.

“When a church gives to CMO, these stories are victories for them as well.”

Through the end of July 2020, the CSBC has helped resource 79 churches through an evangelism grant made possible by churches giving to CMO.

The 2021 CMO theme, Re-Engage, is calling on California churches, communities and the convention to re-engage, after a difficult year of disengagement because of the pandemic.

With a 2021 CMO goal of $400,000, Blankenship said, “We believe that we can do more together than we can alone, and the CMO is a prime example of ‘better together.’” Every CMO dollar is earmarked to reach the 35 million Californians who don’t know Jesus.

As Beaudoin looks toward the 2021 toy drive, he plans to return to more of a “festival atmosphere” that allows participants to hear the gospel message twice while enjoying activities such as pony rides, bounce houses, entertainment and arts and crafts.