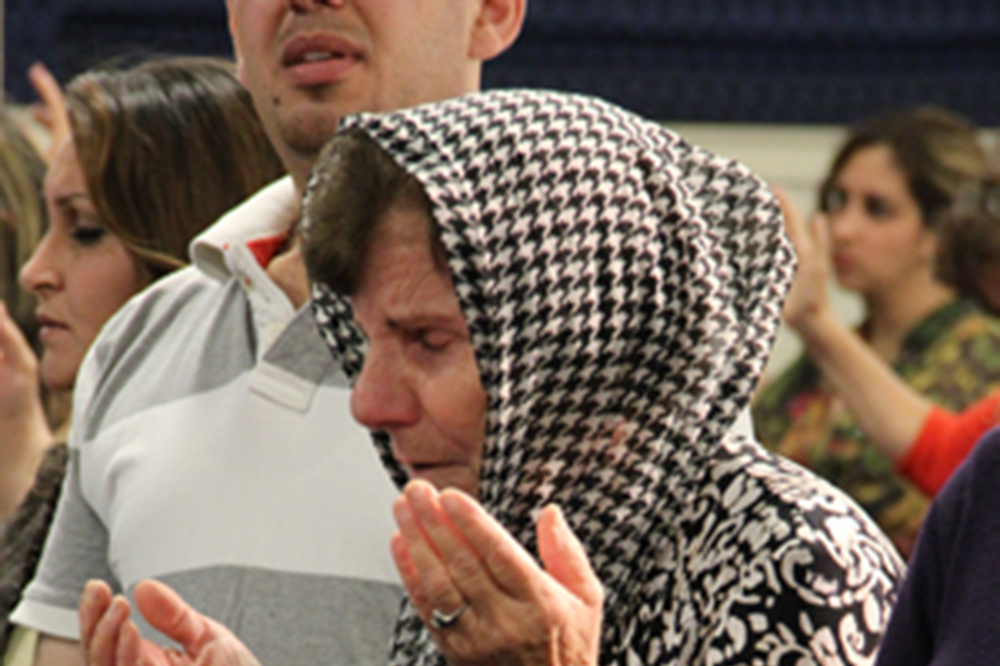 LA MIRADA – How long does it take for one to come to a saving knowledge of Jesus Christ?

Though that timeline differs for each person, one Muslim recently said the Holy Spirit worked in her life for more than 20 years before she placed her trust and faith in Jesus.

Sahar Joyeux* was one of about 1,500 who attended the annual California Southern Baptist Convention Middle-Eastern Conference, held at Biola University July 3-7.

Sahar explained that her journey to find Christ began at age 7 when her father died, leaving her mother, herself and three siblings in Saudi Arabia.

“Because of this tragedy, my family was forced to move in with my mother’s family in Riyadh,” which she explained was very different from the “loving family I experienced while my father was living.”

From 7-21, “I hated my life,” Sahar said, “because I was treated differently and felt less valued because I was a woman.” She explained that her uncles “made me wear the hijab” which covered her from head to toe.

Sahar was proud of being the top student in her class, only to be rebuked by an uncle who told her the only thing important for a woman was to be married and be a devoted wife. He also told her education for a woman was not necessary.

While attending university in her home country in 2005, the king offered scholarships to study anywhere in the world. The only caveat was that upon graduation, the students would return to Saudi Arabia and work five years for the government.

“I knew when I left, I would not return because Saudi Arabia was like hell to me. I’m so glad God had a different plan for my life,” Sahar said with a broad smile on her face.

She started her educational pursuits at Louisiana State University, but didn’t like the humidity and heat, so she transferred to Chico State where some cousins attended.

Though she was not a devout Muslim, Sahar said even in Chico she “would not remove the hijab for fear of going to Hell. I only wore it out of fear.”

Perhaps it was the hijab that set the young Arab woman on the path to salvation because a Christian from Yuba City befriended her, gave her a pink Bible, witnessed to her and began taking her to an evangelical church.

“The first Sunday I ever went to church,” Sahar recalled, “was on Easter. I remember that day vividly. People were singing. They were happy. It was like a party. I was most impressed by the music because I loved the melodies of the songs.”

She discovered her favorite melody first heard on that Easter Sunday was “‘Christ the Lord is Risen Today.’ I remember the alleluias and how peaceful they were.”

Deeply immersed in discussions about Jesus with the friend, Sahar explained there were many things she couldn’t accept about Christianity even though she had limited knowledge of Islam. “I was Muslim because I was from Saudi Arabia.”

Sahar’s friend asked many questions about Islam. “I began learning about the Koran and about Mohammed so I could answer her questions, even though I didn’t necessarily agree with it. This was her way of showing me that I didn’t agree with or believe Islam.”

After graduating in 2011 Sahar began looking for a job, and her friend said her father’s company in Colorado could “hire me as an intern. I accepted because I didn’t want to go back home.”

Little did she know, the company was a ministry dedicated to reaching international students for Christ.

During the internship, people formerly of different faiths who had professed Christ, crossed paths with Sahar and witnessed to her.

She was invited to a female Bible study. “I was the only Muslim there. After the Bible study they took requests and began praying for one another. They showed genuine love like I’d never seen before. They also sang and their singing was very peaceful to me. I felt unity and peace. It was very beautiful.”

Even though she liked what she was hearing and experiencing, Sahar admitted, “I felt pressured. There was just too much pressure. Because of that I became agnostic, choosing to reject both Christianity and Islam.”

On returning to California, Sahar found a job in San Jose and began attending the Saturday evening Middle-Eastern worship service at Western Hills Church in San Mateo. When introduced to the pastor, she told him, “I don’t believe anything.” His response was to pray and let God show the way.

Sahar still struggled with tenets of Christianity, but she began reading the Bible. “I love what all Christians say, so I started looking at what Jesus says about Himself, even though I had doubts.”

Christians continued to witness to Sahar and she kept reading the Bible. One night in desperation, she spoke to God and said, “Jesus, if you are God, please let me know. Show me something. I’m very confused.”

Sahar opened her Bible to I John 4:18: “Such love has no fear, because perfect love expels all fear. If we are afraid, it is for fear of punishment, and this shows that we have not fully experienced His perfect love.”

“At that moment,” she said, “all the fear I had for Allah melted away. I felt the love of God surround me and His presence was very powerful. I felt as though He was behind me even though I didn’t see Him; I knew He was there and I decided to give my life to Jesus at 2 a.m. on July 22, 2012.”

“The first thing I did,” she said, “was send a text to my friend that I was in love with Jesus.”

Sahar said she had been angry since childhood because her father had been taken from her. “But now, I have a Heavenly Father who loves me. I thought He was a monster for stealing my dad from me, and death became a very scary thing for me because I didn’t know where I was going. That is no longer true.”

She continued, “The biggest difference in my life is that I am no longer afraid of death. I have peace with God. I once worshiped a god because I feared him, now I worship God because I love Him.”

Sahar has introduced her mother, her brother and both sisters to the Lord. A brother and a sister have become believers. She still is hopeful the others will accept Christ.

“I thought it would take my family members as long as it did me – years – to come to Christ, but they came very quickly. That has encouraged my faith tremendously.”

She has been granted asylum in the United States but says she isn’t sure what God has planned for her. “I know that I won’t use my management information system degree. That surely isn’t God’s plan. Every day is a new surprise.

“I do know that when I see a woman wearing a scarf (hijab) I want to share the freedom I’ve found in Christ because I was where she is. I believe God wants to use me in ministry to tell other women about the freedom and pure identity each of us has in Jesus Christ.”

Concerning the Middle-Eastern Conference, Sahar said she loves the topics. “It helped me focus on things I’ve never thought about and it definitely has helped me in strengthening my faith and my eagerness to share it. I know the truth and now I want everyone to know it.”

She also said she enjoyed the different nationalities represented, and learning what God is doing among the nations to bring them to Himself.

McWhorter said ministering to and working with Middle-Easterners and other cultures with non-Christian backgrounds “takes time and effort. Conversions don’t come overnight. I believe we are seeing fruit from years of seeds being planted. I believe we will reap a harvest with great benefits.”

Khalil “Charlie” Hanna, a retired CSBC church planter and leader among Middle-Easterners, began the conference 34 years ago. He said he was pleased with having a “very successful Middle-Eastern Conference that is an effective tool to win the people from the Middle-East to our Lord.”

He said Middle-Easterners from 11 U.S. states and several other countries found the message of peace and forgiveness, and many people came forward to find Jesus, the only source for peace of the soul.

Hanna said many think those at the conference are all Christian, but “people from many different religions and backgrounds are represented at this event each year.”

One of those there this year, according to Hanna, was a prince from a royal family in the Middle-East who gave his testimony of “how Jesus saved his life as he fled from his country.”

“Another person told us how he had planned to commit suicide by hanging himself from a tree, but the branch broke and he instead found his Savior that day under that tree.”

Hanna thanked California Southern Baptists for helping sponsor the conference each year “to reach people for Christ and to help others in their journey like Sahar.”