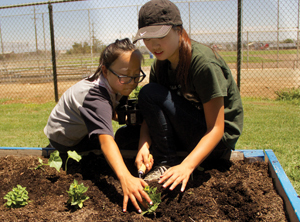 FRESNO – After 10 years ministering each summer in Clovis, this year World Changers moved over to Fresno.

World Changers is a week of construction-related missions done by students between the ages of 12 and 20, which is spearheaded by the Southern Baptist Con-vention’s LifeWay Christian Resources.

This year, 130 students from 11 churches across the nation – including seven from California – participated. They paid $249 per person to put in a 12-hour day for seven days, and painted, did minor home repairs, cleaned unsightly areas, constructed planter boxes, filled them with flowers and vegetables, and even laid tile.

“It was a wonderful experience,” said Project Coordinator Lauren Annin, a member of Clovis Hills Community Church in Clovis and a school psychologist. It was her third project to lead, and her 10th year with World Changers.

When in Clovis, the cost of materials and supplies was covered by government redevelopment grants until funds were gone. This year, Habitat for Humanity of Fresno County received a $25,000 grant from Lowe’s home improvement store for the work in Fresno.

“World Changers is a great organization to work with,” said Tony Miranda, executive director of Habitat Fresno. “It’s really fun to work with another organization that does similar ministry; there’s a nice kindred spirit among us.”

The students – in teams of 14, with no more than two people from the same church on a team – worked on five homes, an elementary school, community center, church and next-door “marketplace” that sells fresh fruits and vegetables as well as alcohol.

Southwest Fresno is an “unfortunately forgotten” part of the city, Annin said. The nearest grocery store is at least five miles away. At the community’s request, and as a result of Habitat Fresno’s influence, fresh fruits and vegetables came to be sold at the liquor store.

Agriculture was the work that developed southwest Fresno, Annin said. The community began to decline as agriculture moved to more fertile places in the Central Valley.

“There’s a huge issue with housing,” Annin said. “We would have loved to have worked on more than five homes, but to do so World Changers requires we have the permission of the homeowner, and … many of them are owned by a company that did not want to give permission.”

Southwest Fresno is a part of the city of about 510,000 people (950,000 throughout Fresno County), basically west of Highway 99 and south of Highway 180, where too few students graduate from high school, where too little money is available, where streets are barely drivable.

“They’ve been trying to get the city to repave the streets; they’re atrocious,” Annin said. “They resemble cobblestones, with broken pavement, huge cracks and huge potholes. … Some of these houses use whatever they can find to keep the homes together. Hangers hold doors shut. Holes in windows are stuffed with plastic sacks. Garage doors are propped up with scraps of wood.”

This is the world in which World Changers ministered.

“It gives them a look at the hurt and desolation of a third-world country,” Annin said. “Just knowing a place like this exists – they don’t have to fly to Africa or India to see people living in extreme poverty – it opens their eyes to how good they have it in their own homes.

“One of the speaker’s points on the last night was that they had their eyes opened to the hurt of the world,” continued the World Changers project coordinator, whose husband Jonathan Annin has been speaker the last six years. “Now they get to go home and, he asked them, what will they do with what they saw?

The World Changers started their day during the week of July 7-12 with a 6 a.m. wakeup call at the Fresno Rescue Mission, which has a building where the 130 students stayed called “Mission to the Mission.” It is used by teams that travel to Fresno to do local ministry.

Fifteen minutes of quiet time at 7:30 at the worksite prepared the students for the work they would do despite temperatures that each day rose as high as 108 degrees. An hour-long lunch break at 11:30 included Bible study within work teams. Then it was back to work until 4 p.m.

Dinner was at 6 p.m.; a 90-minute joint worship service started at 7:30 with music and a speaker. Bible studies within church groups started at 9:00, “then free time and lights out at 11 p.m.,” Lauren Annin said.

The World Changers’ work consisted of applying blue, green or tan paint to the exteriors of homes, with complementary trim – paint colors selected by the homeowners – and repairing the fascia boards and fences of the five homes. The students also pulled weeds and beautified yards.

At a nearby elementary school, students painted the cafeteria, cleaned and sanitized all the classrooms, and landscaped the property, in addition to painting curbs and speed bumps in the parking lot.

At Mary Ella Brown Community Center they pulled up tile from the floor in the main room, spread a cement overlay to make the floor level, and laid new tile. They also built flower-boxes – four long ones and 10 shorter ones – and filled them with flowers and vegetables.

The World Changers painted the exterior of a small nondenominational church buttercream yellow with white trim, and the “marketplace” next door white with red trim.

A video produced by the California Southern Baptist Convention communications group shows the joy expressed by World Changers and their leaders as they worked (www.csbc.com).

“We were there to serve this community and to show support for this community,” Annin said. “We’re meeting them where they’re at, and fixing them to the best of our ability, to make them as livable as possible.

“It helps to give the homeowner more of a sense of pride about their home; it’s nice when your home looks nice,” she added. “It helps give a feeling of contentment when otherwise their circumstances might not give a sense of contentment.”

After 10 successful partnerships with the City of Clovis, moving over to Fresno and working with Habitat for Humanity was in some ways like starting a new job, Annin said.

“But Habitat worked really hard for World Changers,” she continued. “It was a great partnership. The people we worked with from Habitat were Christ-followers so we didn’t feel we had to go through any religious red tape.”

A mid-week community barbeque in southwest Fresno “started planting seeds for next year,” Annin said. “We plan on being back in the same area next year, and will be staying at the Fresno Rescue Mission. The community response was incredible; people have been calling in to say thank you and asking when we’re coming back.”

July 13-18 is set for the next group of World Changers in Fresno; $269 per person is the cost. Watch the video.