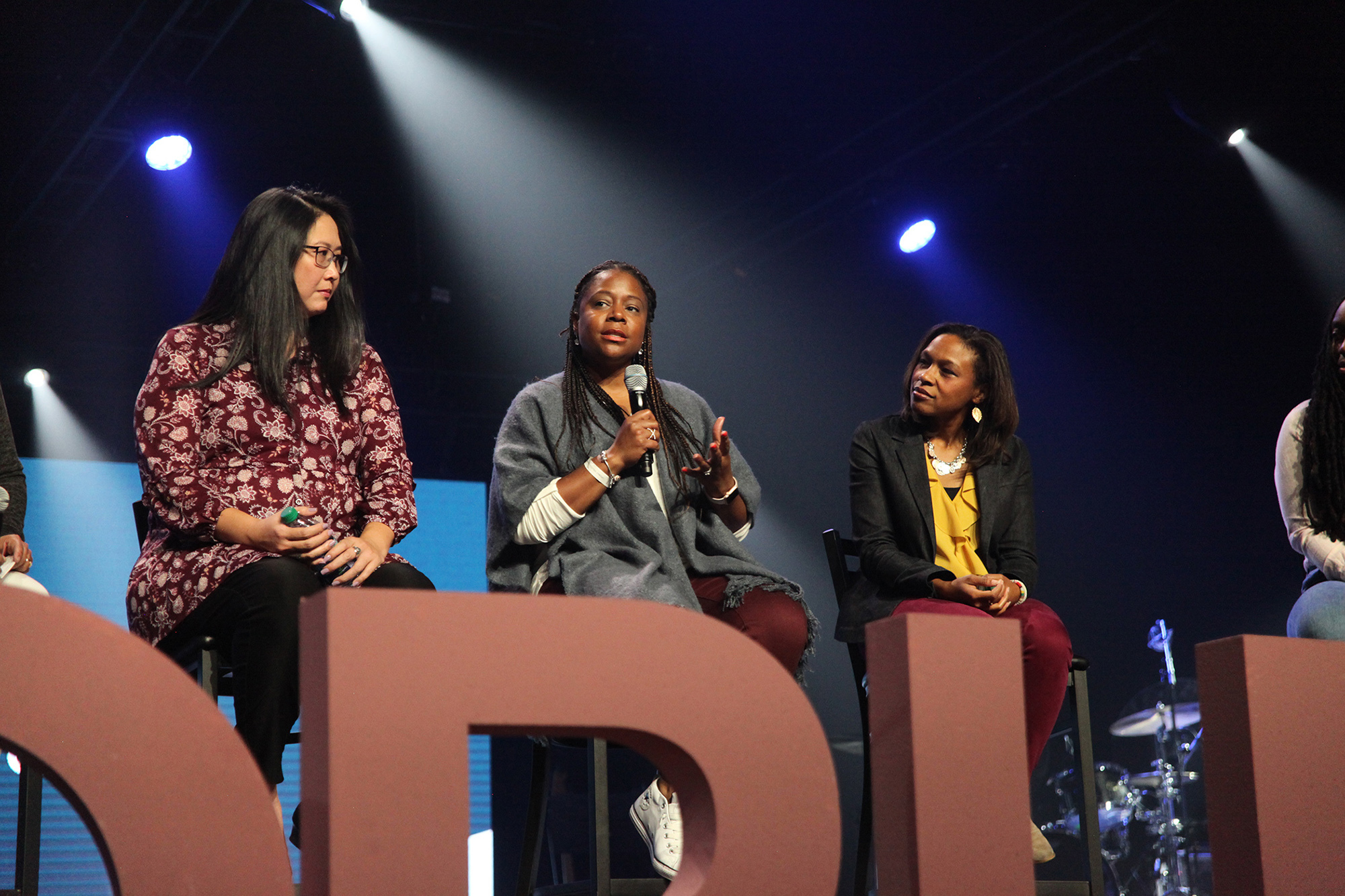 Women urged to be ‘Confident’ amid cultural issues

NASHVILLE (BP) — There was a collective gasp among the 1,600 women gathered for the kickoff of the 2018 LifeWay Women’s Leadership Forum. During a panel discussion on racial reconciliation, Missie Branch shared about a shocking thing she once heard from some Christians heading to China for mission work.

“Someone asked them what they were looking forward to about going,” said Branch, assistant dean of students to women at Southeastern Baptist Theological Seminary. “They said, ‘There’s no black people there.’ To hear those things in the body of Christ means we’re not as far along as we think we are.”

Trillia Newbell, director of community outreach at the Ethics & Religious Liberty Commission, reminded the audience that Christ followers are already reconciled together because of the blood of Jesus Christ.

“Jesus tore the veil of hostility through His body. But the truth is, we aren’t living in that reality,” Newbell said. “So my prayer and hope for the church, in particular, is that we would live in what’s already been bought for us.”

The theme for this year’s forum was “Confident.” Professional and lay leaders from 30 states and 14 denominations gathered at Long Hollow Baptist Church in Hendersonville, Tenn., to learn from one another and sought-after ministry experts. Among special guests were Jackie Hill Perry, Jen Wilkin, Jennifer Rothschild and Lauren Chandler.

“It’s not always easy to think of a theme for a conference that encompasses so many topics, yet the theme was chosen because so many women struggle with confidence,” said Kelly King, LifeWay’s women’s ministry specialist.

“And part of the purpose of the forum is to address topics women are discussing in their roles as leaders and give them insight and tools to lead in those conversations,” she noted. “Sometimes that includes cultural conversations such as racial reconciliation.”

And other times it means having a conversation about how women can confidently — and in a healthy way — collaborate with men in their churches and workplaces.

It’s important to have healthy boundaries between men and women in ministry in work environments, Gallaty said. But he suggested it’s possible to be too rigid.

“Let’s not be so insulated that we don’t have input from women,” he said.

“Without weigh-in, you’ll never have buy-in. Don’t ever make or implement plans in isolation. (Have) women speak into the plans. Then, it’s easy (for them) to ‘huddle and break,'” Gallaty said. “They’re sold out and spearheading the vision too, because they’ve bought in. We need boundaries, but we need buy-in.”

When King asked the panel if they see more women being invited to the leadership table, Kelley explained women in leadership should be seen for their contributions as image-bearers of God — not simply due to their gender.

“I really have been exposed to and surrounded by peers who are exceptional leaders who happen to be women,” he said.

“I think we want to get to a day when women are at the table of leadership, not just to give the perspective of a woman, but to give their perspective. It’s a small shift in language, but if I, as a leader, am only looking to the women on the leadership team and asking, ‘What do you, as a woman, think about this?’ In some way, I’m lessening the contributions of the women who are there.”

Conversations like this, King said, help build the confidence of women who sometimes feel as though they don’t have a voice.

“They aren’t always confident in their ability to lead or whether they should lead, yet women have influence in their families, their churches, their workplaces and in their communities.”

In her Thursday evening keynote address, speaker, artist and poet Jackie Hill Perry explained that in today’s cultural climate it’s easy to want to pull back — or quit altogether.

“There is — and will be — the temptation one day to give up,” said Perry as she gave several compelling reasons from 2 Corinthians to persevere in ministry, regardless of challenges.

“God, throughout history has used people to point other people to Himself. And you’ve been given this same gift. Ministry is not about us.”

The 2019 Women’s Leadership Forum is scheduled for Nov. 7-9 in Hendersonville, Tenn.