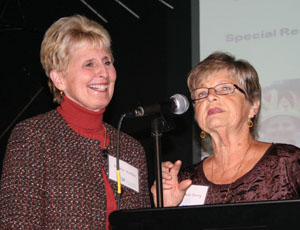 CLOVIS – Learning to give “All For You: Surrender, Sacrifice and Serve,” participants at the California Women’s Meeting Oct. 21 heard from their own, as well as international missionaries.

Held this year at Clovis Hills Community Church in Clovis prior to the California Southern Baptist Convention annual meeting, the event began with breakfast and music, led by Leah Goslen, worship leader at Hillcrest Baptist Church in Richmond.

The group of more than 100 honored Debbie Wohler for her 35 years of missionary service in Tahoe. Through restructuring at the North American Mission Board, Wohler’s position will be eliminated at the end of this year. She was presented with a monetary gift, a quilt and a “memory book.”

An offering taken during the meeting resulted in $320 in gift cards, and more than $1,600 in cash, which were given to Wohler for ongoing ministry – she plans to continue her work by raising her own funding. Women at the meeting also brought a number of craft supplies for the Big A Club for children Wohler has headed up for many years at First Baptist Church in Tahoe City.

She has led the children’s outreach ministry as well as serving as a resort missionary and “ski chaplain” during the winter months, spanning five decades beginning in 1979.

God provides for what He calls His people to

Flagg, who has been an IMB missionary with his wife Connie for 35 years, said he has learned through his service that “if you surrender as much as you’re capable of at the time … you’re capable to do more,” explaining that God provides for whatever He calls His people to.

Flagg noted funds from the Lottie Moon Christmas Offering for International Missions had purchased a missionary house in Mexico City, and he currently teaches at a Mexico City seminary started by Southern Baptists in 1903.

Some are fearful to take risks, Flagg told the women, “so the challenge to us is to get beyond that and Surrender, Sacrifice and Serve so we can see God glorified.”

God is present in all circumstances and can’t be contained.

Gordon Fort, the son of missionaries to Africa, reminded the audience that “God’s arm is not short, His ear is not deaf – God is present in all circumstances. He cannot be contained.”

“He wants us as His people, with the urgency of the time, to Surrender, Sacrifice and Serve. This day and age calls for us to go all in,” Fort encouraged.

He related the story of several missionaries to Yemen who were killed 10 years ago at a Baptist hospital, including Martha Myers who had been a doctor there for many years. Fort said that as a result of the missionaries’ martyrdom, some 3,600 made professions of faith in Christ in the intervening decade.

“Dr. Myers was all in for the sake of the gospel,” Fort declared.

He challenged the women to “put it all – your life, your talents, your gifts – on the table for the cause of Christ.”

During breaks at the Tuesday morning meeting, participants were given an opportunity to view displays providing information about a variety of missions opportunities.