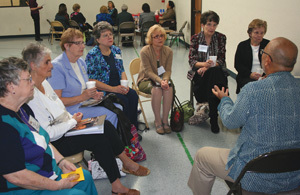 Iorg was keynote speaker for the Woman’s Missionary Union-sponsored event prior to the California Southern Baptist Convention annual meeting.

While flashing the World Series ring the team presented to Iorg after their win last year, the president of Golden Gate Baptist Theological Seminary in Mill Valley encouraged the women to “go where the lost people are.” He cited some examples from his new book, “Live Like a Missionary,” and told the women that when they get where the people are, “enjoy yourself” and get involved in their lives.

Iorg also noted Christians are to “stay on message with the gospel,” emphasizing that mission service shouldn’t be Christians just casually “going,” but rather “like deployment,” being fully prepared to share Christ.

Another important aspect of serving on mission is to “overcome religious barriers,” Iorg noted.

An International Mission Board missionary serving in South Asia who cannot be named for security reasons, also addressed the group.