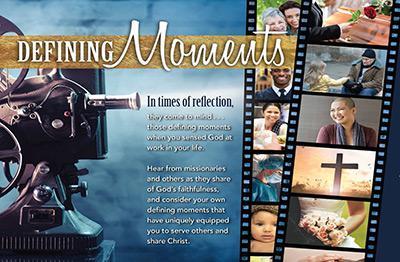 BIRMINGHAM, Ala. (BP) — Those who attend will be encouraged to identify defining moments that affect and inspire their missional journey during the Woman’s Missionary Union (WMU) Missions Celebration and Annual Meeting, June 11–12, in Phoenix.

Defining Moments will be a consistent theme of featured missionary speakers, including Kelly and Brandi Parrish, church planters serving with the North American Mission Board in Denver; Jacob and Jessica Dahl, church planters serving with NAMB in Washington; and Ross and Dena Frierson, International Mission Board. Focused times of prayer will be led by Carlos Ferrer, executive vice president and chief financial officer NAMB; Edgar Aponte, vice president of mobilization for the IMB; and Ken Weathersby, vice president for convention advancement for the Southern Baptist Convention Executive Committee.

Onsite registration opens at 2 p.m. on Sunday, June 11, with conference options beginning at 3 p.m., including 10 speed conferences that run 20 minutes each in length. A reception to greet Sandy Wisdom-Martin, the new executive director of national WMU, will be held from 4:45–6 p.m. prior to the first general session at 7 p.m. A special celebration of the 20th anniversary of lives being transformed through Christian Women’s Job Corps, a ministry of WMU, will be part of the evening session.

On Monday, general sessions will be at 9 a.m. and 2 p.m. In addition, 14 conferences will be offered during breakout sessions from 11 a.m.–noon and 4–5 p.m. Topics range from strategic prayer to working across generations to ways to create community among volunteers, in addition to conferences led by NAMB and IMB missionaries.

At 6:30 p.m. on Monday, there will be a special pre-screening of “Mully,” a movie about Charles Mulli, a man born into poverty in Kenya. At age 6, he was abandoned by his parents as they left in search of a better life. He grew up begging on the streets and became a Christian as a teenager. When Mulli was 17, he walked more than 40 miles to Nairobi to seek employment.

He found work and met his future wife Esther. He became a wealthy entrepreneur and respected community leader, and the couple had eight children. In 1989, the Lord laid it on Mulli’s heart to help other children living in poverty in Africa. He sold all his property and businesses in order to provide street children in Africa with shelter, medical care, education and more. Since then Charles and Esther Mulli have taken guardianship of more than 12,000 abandoned children.

Following the movie, the Mullis will be available onsite for a question-and-answer session and to meet attendees.

The WMU Missions Celebration and Annual Meeting will be at the Renaissance Phoenix Downtown Hotel Ballroom at 100 N. 1st Street, just prior to the annual meeting of the Southern Baptist Convention, June 13–14.

Attendees are encouraged to bring supplies for hygiene kits that will be put together by children participating in SBC child care during the week. These kits will go to Arizona Baptist Children’s Services to bless the individuals and families it serves.