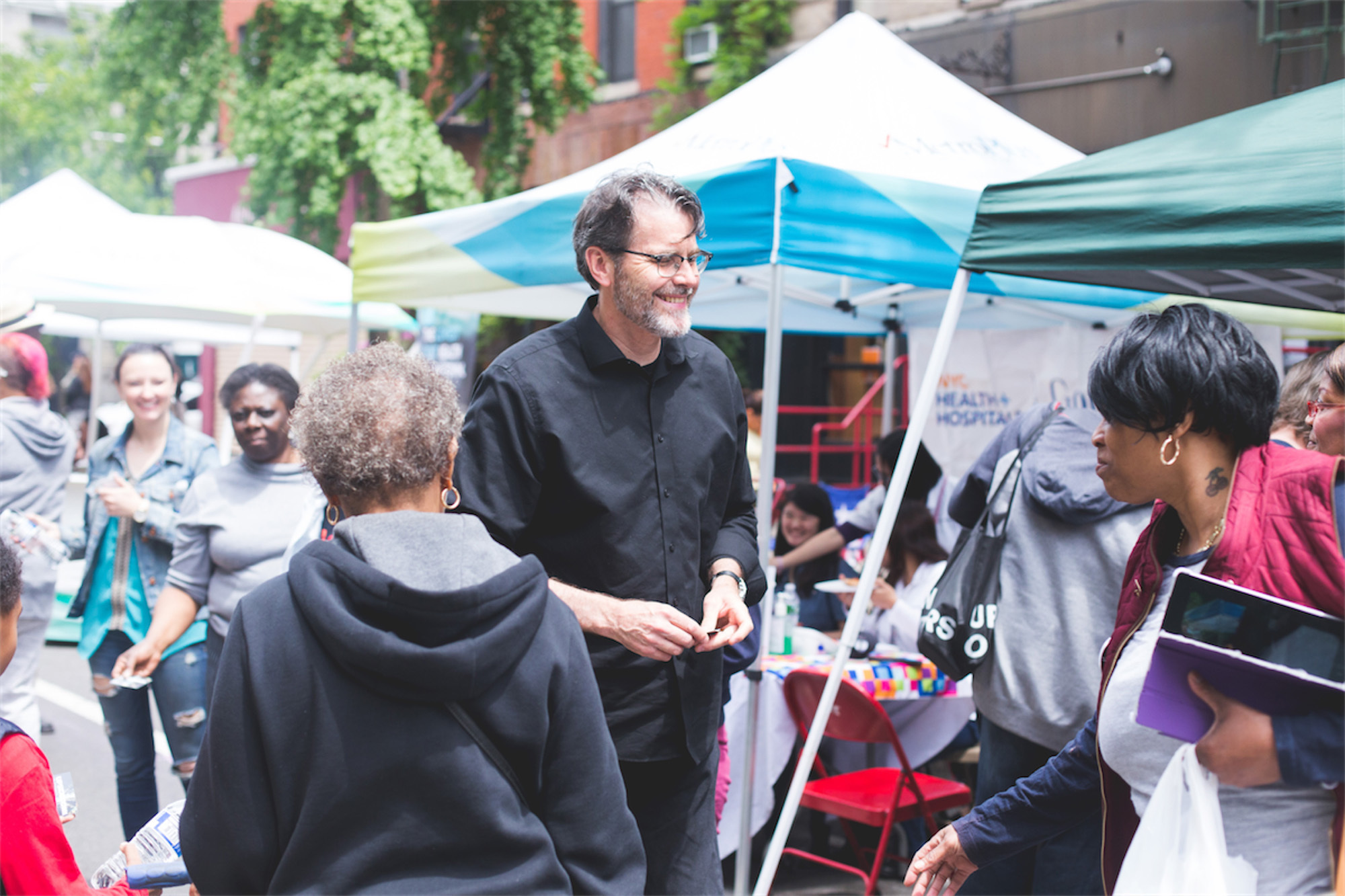 NEW YORK, New York — Once an abandoned storefront tagged with spray paint, the building that originally housed Graffiti Church has become a symbol of hope on New York’s Lower East Side. Send Relief missionaries Taylor Field and wife Susan strategically positioned the church plant in 1986 amid crack houses and a large homeless population, eventually making this neglected neighborhood their home.

“Jesus started with meeting needs first,” Field said. “His compassion grew people’s faith, and then He built the church on that faith.”

The Fields’ work was not without opposition. Confronting drug dealers and learning how to care for users and hundreds of homeless men, women and children were part of the weekly challenges.

“The first college mission group would paint our storefront, and then someone would tag it again with graffiti,” Field said. The mission team then painted their own spiritual message on the wall along with the word, “Graffiti.”

The ministry workers decided to embrace the form of artistry so familiar to the neighborhood, and gave what was then East 7th Baptist Ministry a new moniker: Graffiti, which eventually became a church.

Embedded in the identity of the church is a simple idea: “From small things come great things.” Field explained that it is all about an upside-down approach to ministry, doing tangible, practical things well.

Stories of life change testify to the effectiveness.

The practical approach to ministry

Recently released from prison and living in a treatment facility for drug rehabilitation, Raul received a court mandate to take a GED class; Graffiti offered one. Raul was skeptical about going to a church, even for a required education class, but he went anyway.

One day after class, a member of the church extended an invitation to visit a service saying, “We would love to have you.” Something about the “we” stood out to Raul, and he came — six months in a row.

He also brought his girlfriend Siyyida. Leaders in the church helped mentor Raul and Siyyida. They both became followers of Christ, and after more than two and a half years of dating, they decided to get married.

Now they attend and serve at Graffiti campuses, which have grown to five meeting sites in the New York City metro area and two affiliates in other cities.

Melissa, too, has experienced the impact of personal and practical ministry. She went to Graffiti’s Christmas Toy Drive in 2012. When she arrived that day, she was basically on empty spiritually and mentally.

“I had made some terrible choices in my marriage, my career and my health, and I felt like I was drowning,” she said. The instructions she received at the door were simple: First, you talk briefly with a toy store counselor, and then you go shopping. The counselor greeted Melissa warmly and told her that it was a joy to pray with her.

During the prayer time, Melissa said, “I couldn’t speak or respond. I just wept. Uncontrollably…. It wasn’t a prayer I had in my Rolodex of memorized prayers. This woman was talking to God as though He was a King, a Father, her hero, something deeper than I had ever experienced. She shared her story with me, and I finally opened up to her about my avalanche of troubles.”

Melissa accepted Christ that day, and now she helps lead the same ministry that changed her life.

The small-things approach works. Change continues on the Lower East Side through daily connections in the diverse community. The church shares Christ’s compassion in practical ways — from after-school tutoring and ESL classes to hip-hop dancing and lunches in the park.

“When we serve a meal, it’s not just about handing over some food; we sit down together at the table and talk while we eat,” Field said. “It’s about connecting.”

Many who call Graffiti their home church have been directly impacted by the church’s ministry efforts: a free sandwich, a literacy lesson, legal assistance, a blanket in the New York winter. Louis “Chess Monster” Taylor is part of that group.

“I was homeless for about 60 years,” said the former history teacher who moved to New York about 15 years ago. Every day, he played chess at Tompkins Square Park, and through that consistency, he became well known in the neighborhood.

When one of the Fields’ young sons expressed interest in learning chess around the age of 9, a game with “Chess Monster” was a must. That was the beginning of a relationship that continues to this day. The Field family invited Chess Monster to lunch at the park.

“I noticed when he [Field] started feeding the people in the park — no strings attached,” the chess expert said. “Other ministers came through the park, and you had to listen to the hour and a half sermon first. Then you might get a bag or a ticket for the pantry. Well, Taylor was the complete opposite. He fed everybody first. And if you wanted to stay, you could stay. If you didn’t want to stay, you could go. So, that really impressed me.”

Over the course of a few years, Chess Monster went from receiving free lunches to helping serve meals to others. He connected with people at Graffiti and experienced something new. He noted when you’re in need of food or shelter and someone reaches out to help, it makes a big impact. “There’s this old saying: An empty stomach has no ears,” he said.

Graffiti’s approach to meet the need first made it possible for Chess Monster and people in similar situations to hear about the love that motivated their efforts.

Louis Taylor now has a personal relationship with Jesus. He works at the church in maintenance, helps lead Bible studies and continues to be part of the compassion ministries that changed his life.

Through consistency and authentic love, the hope of Christ has infiltrated the Lower East Side and surrounding communities. Graffiti continues to pioneer ways to serve the neighborhoods of their respective campuses and they keep in mind the larger goal: to share the Good News across the globe.

“Graffiti values a heart for God and hands for work,” Field said. “We have more than 20 ministries and have assisted in some way in helping start 31 new church plants which in turn have started 39 more.

“There’s a famous game in chess, as I understand from chess experts, where one player continues to give, and give, and give some of their most valuable pieces,” Field said. As it plays out, you may look like you’re losing, but it’s a strategy because it’s a strategy for the long game; “in the end, you’re really winning. I think that’s part of the story of the Gospel.”

That long-game vision and willingness to invest time and resources have helped transform this area over the past few decades. Change has not come quickly, but it has come.

Learn more about the Fields at AnnieArmstrong.com.

Watch a video about the Fields below: