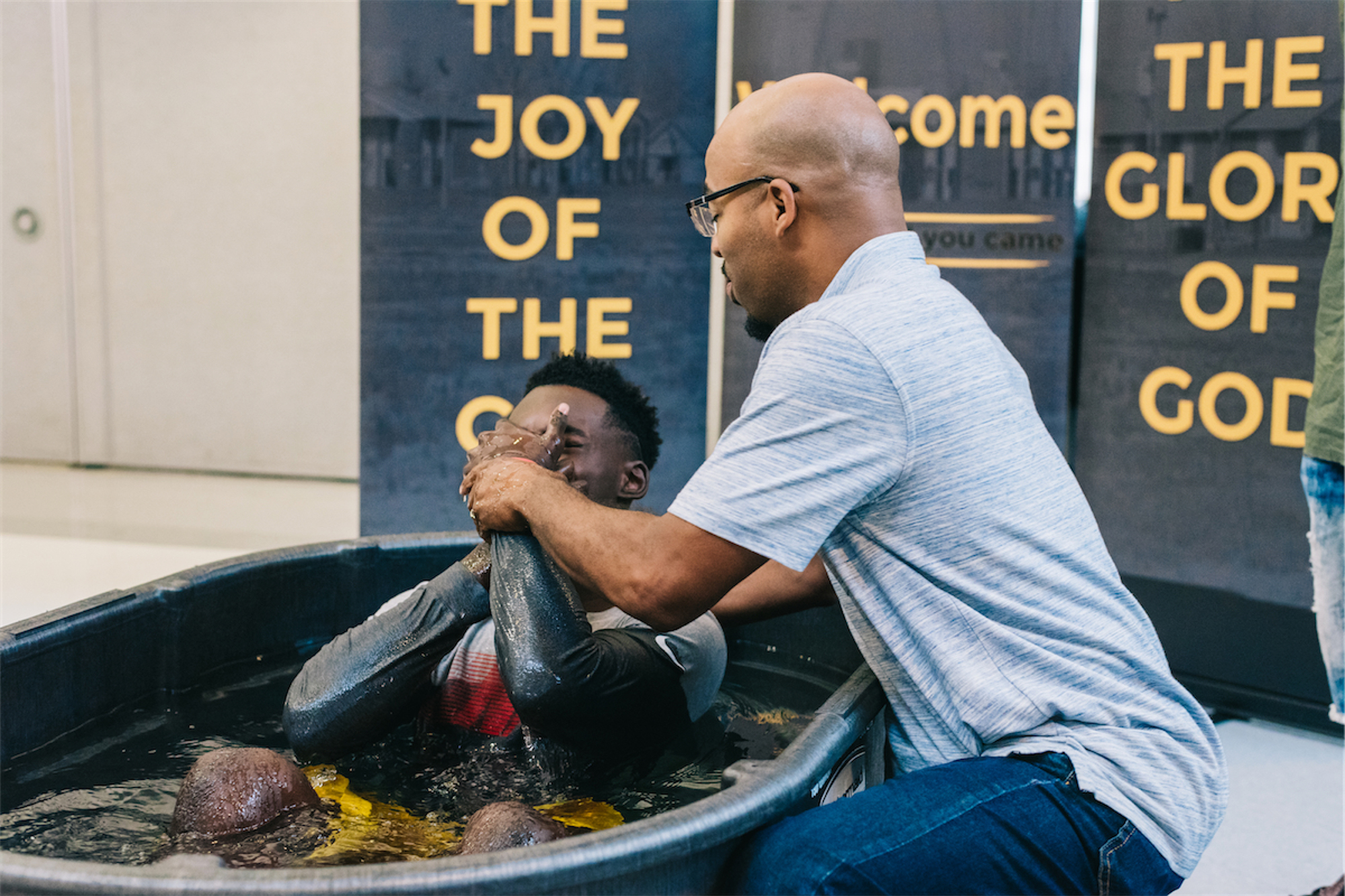 A native of East St. Louis, Ill., Kempton Turner grew up on the streets where he now serves as a church planting missionary and pastor of City of Joy Fellowship. The church was launched on Sept. 18, 2016, with one mission: restoring hope to the city through Jesus Christ. It currently rents space at the local Jackie Joyner-Kersee Center.

“Because I was raised here, I’ve got a real heart for the people,” Turner said. “It’s a small city. It’s a dangerous, poor place, 85 percent fatherlessness. The houses, the buildings and the roads show the desperate place that East St. Louis is in. The people know struggle.”

A drive around the city reveals abandoned buildings. The public library, the McDonald’s Turner visited as a child, family-owned restaurants — all closed now. Recent years have seen the numbers dwindle from around 60,000 to 26,000.

“Jobs and police officers have left this city,” Turner said. “Downtown is kind of like a ghost town, but it’s ripe for the Gospel. The Lord hasn’t forgotten this city.”

Faith on the rise

On Wednesdays at 6 a.m., you can usually find a group of men from City of Joy Fellowship worshiping with an acoustic guitar.

“As the psalmist looked around at the tragic condition of the people in his city,” Turner said, “it appeared as though God was unaware, inactive or asleep. So, he prays, ‘Arise, O Lord.’ Likewise, we cry out in one way or another every Wednesday morning.”

The prayers ring out over a people facing poverty, gang violence, environmental contamination and continued decline. Turner, Caryn and their five children believe that change is possible. They are working side by side with other believers to show their neighbors that love is real and hope is alive.

“The biggest challenges we face are hardness of heart and lack of zealous evangelistic consistency,” Turner said. In 1989, on the way home from Clark Jr. High School, he was held up at gunpoint by a gang leader with a reputation for pulling the trigger.

“Amazingly, I ended up escaping that situation,” he said, “and as I look back on it, I realize it was God’s grace, but that was the last straw for my father and my family. They had had enough of the violence and the crime, so we moved to Houston, Texas. Little did I know 25 years later, God would give me the privilege to come back to my hometown and preach the Good News of His Son to the people of East St. Louis.”

Recognizing that teenagers there are in need of community, and a safe place to gather, Turner and the team at City of Joy host a youth night on Tuesdays. There, they train young people how to serve others and hold down a job.

The church also goes to the places where youth already gather during the week — schools and community centers — to establish relationships and consistency. Their desire is to show teens that they care and are invested in their well-being and future.

“A young lady named Allison came to our church rejecting Jesus,” Turner said, “After a few months of hearing the Gospel and spending time with a few women one-on-one, she surrendered her life to Jesus. She is the real deal, zealous about spreading His Gospel and love!”

Turner names a long list of men and women who have moved to the area to help with the youth: Matt and Hannah, who moved their young family from Missouri; Staricia, who came from Indiana to work in the school system; Lydia, a nurse who has a heart for young people; Joel, a skilled basketball player and coach who uses the sport to connect with the youth; and Zach, who started a Bible study for the youth in his home that has already outgrown the space. The list goes on and on.

“These precious believers are a picture of Jesus, coming out of comfortable suburbs, moving into the heart of a 99.9 percent African American city with danger, poverty and fatherlessness,” Turner said. “They’re moving because Jesus is sending them as a reflection of His heart for this city, and God is blessing their efforts. It’s amazing.”

Home renovation is another practical way City of Joy is connecting with their community. Hammers and nails, primer and paint — these are the tools that are allowing believers to build a relationship with people who live near the church.

“All we need is a way to start a conversation,” Turner said. He is training the members to intersect with nonbelievers, meet needs, and share their personal stories of redemption.

Dubbed R3, the outreach ministry is focused on community development, house restoration, business restoration and employment. The outreach goal is to work corner by corner and house by house throughout the city until each square foot has been covered in both repairs and improvements as well as prayer.

In their business revitalization program, they work on providing local businesses with the resources to launch or relaunch. They also strive to connect young men and women from the youth program with job opportunities in these local businesses as a way to benefit the local economy and foster the sense of community.

As more people come to know Christ, City of Joy is celebrating more baptisms. And it all started with a special one that healed a broken relationship from the past.

“The first baptism at the church was my birth mother who did not raise me,” Turner said. “Praise the Lord!”

Indeed, the church is appropriately named. With prayers, planning and consistent efforts, they are working toward bringing that same kind of joy into every home in East St. Louis. They want people to not only remember this place but to invest in it.

“Some of the neediest places in America are in the inner city,” Turner said. “We’re excited to join the momentum of what God is already doing in this city with so much potential. Acts 8:8 — that’s our hope and prayer for East St. Louis: that the Lord will fill the city with joy.

“Gifts through the Annie Armstrong Easter Offering are going to help us rebuild the community of East St. Louis,” he said. “We want to see God spiritually invade this city. We want to see a supernatural awakening in this city turning multitudes of souls to Jesus Christ.”

Turner explained that they are praying for the Lord of the Harvest to send more laborers. The vision for change is great — and so is the need for ministry partners.

“Psalm 127 says, ‘Unless the Lord builds the house, they labor in vain who build it.’ And so, the Lord is the builder,” he noted. “The church is not about bricks and mortar and boards. He redeems His people and puts them in front of others in houses, on street corners, in Sunday School classes and in large- and small-group gatherings. The Lord builds His people through the Word. And our vision is that the Word of God would so transform East St. Louis that multitudes of souls are saved and established in faith, families are restored, children can have a mom and dad in their house again, prevailing cultural brokenness — like drug addiction and gang violence — would be healed and churches would be started near and far.

“Our house renovation ministry is just a small echo of the thunderclap of spiritual renovation that we see God doing — one soul, one house, one block at a time in my hometown,” Turner said.

Learn more about the Turners at AnnieArmstrong.com.

Watch a video about the Turners here:

EDITOR’S NOTE: The annual Week of Prayer for North American Missions, March 4-11, and the Annie Armstrong Easter Offering provide support for missionaries who serve on behalf of Southern Baptists across North America. With a goal of $70 million, this year’s offering theme is “On Mission: Here and Now.” Kempton and Caryn Turner are Week of Prayer missionaries for the North American Mission Board. For more information, visit anniearmstrong.com. To read about other 2017 featured missionaries, visit anniearmstrong.com/missions-stories.