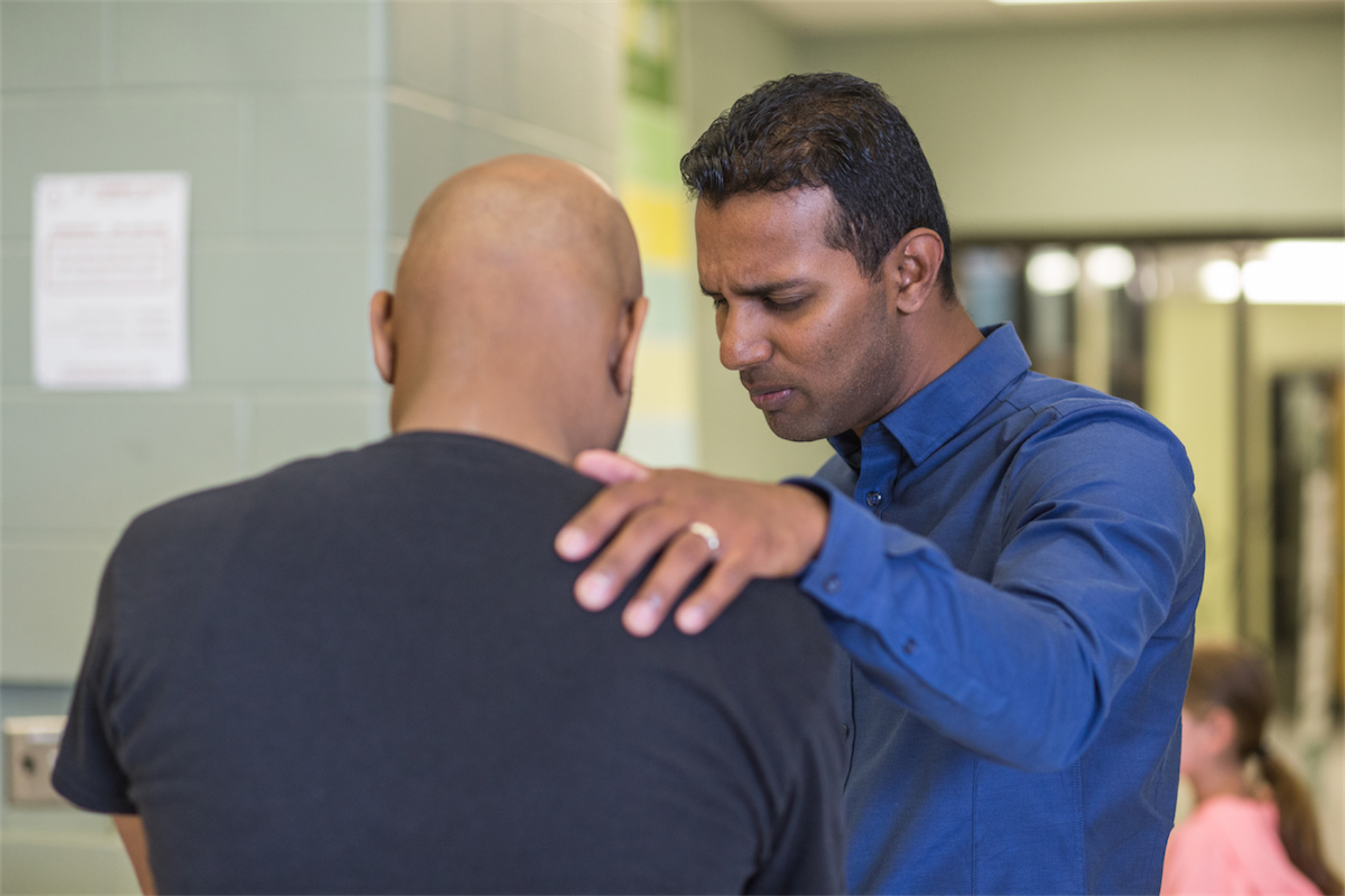 TORONTO, Ontario, Canada (BP) — “Everyone is welcome!” That is the motto of Fellowship Church Rogue Park located in Toronto’s East End. This multiethnic, multigenerational church plant rents space in a local Catholic school on Sunday mornings and hosts events throughout the week.

Strategically launched near an area known for gang violence, the ministry is led by church planting missionary and a former gang member Kesavan Balasingham and his wife Viji, both immigrants to Canada who found new life here.

Known as the most multiethnic city in the world, Toronto’s metropolitan area has a population of nearly 6 million. “More than half of the people here were born outside the country,” Balasingham said. “An estimated 4 percent of the population is evangelical Christian. We thank God the world is here, but the multicultural nature brings a lot of confusion. So, clarity of the Gospel is a major need.

“We believe that this is the harvest where God wants us to work, to pray, to labor and to see people who don’t know Jesus becoming worshippers of Christ. And then they themselves reach out to others. That’s our prayer, our dream.”

The pursuit of freedom

Originally from Sri Lanka, Balasingham was raised Hindu and lived in several countries before his family moved to Canada. Differences in background, culture and religion caused great divides in the community, and at the age of 19, he was arrested for gang violence. He said, “While in prison, I got to read the Bible for the first time and came to understand the Gospel as the Good News.”

Darryl McCullough, a volunteer from a local prison ministry, met weekly with Balasingham, and became a trusted mentor to the young Christian.

“I believe that anybody can be redeemed,” said McCullough in a television interview about his work in the prison system. “I believe the question needs to be asked, ‘Why does somebody get to where they are’ and then start working on that premise rather than throw them away. I believe most guys in prison are going to get out sometime — how do we want them out?”

Balasingham grew in faith through discipleship with men like McCullough. He found freedom in Christ during his incarceration and discovered a heart to help others do the same. He studied the Bible with fervor and took college courses to become a counselor.

“The Lord saved me very early on in my journey in prison,” Balasingham said. “I kept reading through the Bible, and I came to read the story of Joseph, a young man who ran away from sin. And then afterward, the story of Moses, a man who ran into sin. I saw how God still used him. Then I saw the story of David. And most importantly, in the New Testament the story of Saul who became Paul, how God used …” He pauses and laughs, “Um, violent people for His good glory. I began to have hope that God can most certainly use my life, in whatever way it pleases Him.”

After his release, he continued his studies and graduated from seminary. During this season, God brought Viji back into his life.

Though she, too, was from Sri Lanka, they met in Toronto while at school. The two eventually were engaged and married. Together, they made the move into full-time ministry.

After two and a half years pastoring at a community church in Toronto, Balasingham felt called to return to the same area where he was once a troubled youth to plant Fellowship Church Rogue Park (FCRP), which initially began in his living room. The goal: to minister to internationals dealing with challenges like the ones he and his family had faced.

FCRP hosts open gym and field nights for area youth to play and connect. For Balasingham, this ministry opportunity is close to his heart as it targets young men who are in similar situations to his own as a teenager.

Shooting hoops and praying together has built trust as well as community, and in the summer of 2016, two young men were saved and baptized.

“Both are being discipled and growing,” he said. “They are now co-leading our young men’s sports outreach every week. They have anywhere from 20 to 30 young people showing up and hearing the Gospel. Both know the value of having gospel conversations with these young men and follow up with them from week to week.

“It’s a joy to see fruit in their lives and our local church being blessed by their service. This week, I took both of them to a three-day workshop on biblical exposition so that they would learn important principles on faithfully teaching God’s Word to others.”

At FCRP, relational ministry is a core value. Every other week, they host “Eat, Serve, Love.” Members and guests sit around a table, share a meal and work on building community and growing spiritually. A babysitter and a place to connect is provided. Their desire: “Everyone is welcome but especially those who don’t have a community of their own.”

One member has an interesting connection. Gajan Raveendran and Kesavan Balasingham were members of rival gangs and therefore sworn enemies during their teenage years. “I was in and out of jail all the time, in and out, in and out,” Raveendran said. But in 2010, after nearly a decade of recurring prison terms, he decided he wanted a different kind of life. He approached a friend who was a Christian and that friend said he knew someone who could relate and may be of help. Would he, Gajan, be willing to give this guy a call? When Raveendran asked what the guy’s name was, his friend replied, “Kesavan.”

Raveendran called and a friendship formed. He could see the difference in his former enemy.

Like many of the immigrants in the area, Raveendran has spent most of his life between cultures, trying to find a place to belong.

“The devil always brings up the past to make you feel like you can’t — makes you feel worthless,” he said. However, he has seen firsthand how God can change a person for the better.

Raveendran attends church because he says he likes a lot of the things about Christianity, and he likes the way Christians treat one another. Going to FCRP helps him remember he is not alone.

“I’ve lived my entire life doing my own thing, so it’s sort of like hard for me to just give that up, and then give it all to God,” he noted. “But eventually one day, I do want to just give to God and just live my life freely, you know?”

Balasingham’s new church plant is greatly needed in Toronto. As the city’s multiethnic population grows, so does the spiritual darkness. The urban landscape can be a concrete jungle for many residents, especially immigrants in search of a new home. FCRP wants to meet these physical, emotional and spiritual needs.

Kesavan and Viji consistently pray for God’s guidance and that more will join them in expanding the church’s reach.

“We want to keep going into the harvest and never settle,” Balasingham said. “We have the world living around us and they have their religions with them. Our aim is to point toward the Gospel by proclaiming and demonstrating its power in our lives by the way we engage the community.”

Watch a video about the Balasinghams here: