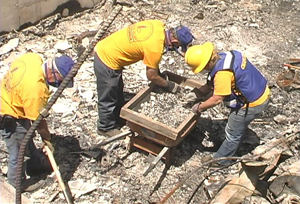 COLORADO – “I don’t want any of you religious people anywhere near my property!” declared a Colorado cowboy after his home had been destroyed during a firestorm. The California Disaster Relief volunteer thanked him for his time and assured him other volunteers were willing to help if he changed his mind.

“I thought I could clean up my property by myself, but I need help. I’ll let your folks help me on the condition they never talk about God or religion.”

The commander assured the cowboy the volunteers would be glad to assist.

A team of California Disaster Relief cleanup volunteers were soon on the job hauling twisted metal to debris bins, shoveling ashes and sifting through the rubble for personal objects. After a day or two, the cowboy wanted to know why they never talked about their God. The unit leader reminded him he had been insistent that they not do so, but that they would be glad to answer any questions.

When they stopped for lunch, the cowboy bowed his head as they gave thanks for the meal. When they finished work on his property, he asked if he could work with them on his neighbor’s property. A few days later he asked the unit leader if he could “come down to the church where the volunteers were staying to thank them for their help.”

The next Sunday the cowboy, his wife and adult daughter met the volunteers as they were going in for worship at the church. During the service, the Incident Commander was called upon to tell the church family about the work that had been accomplished that week. He then introduced the bowlegged cowboy who strode to the front of the sanctuary and stated it was the first time he’d ever been in a church. He thanked the congregation for their help and returned to his seat.

When the sermon started, the cowboy slipped out of the service, but was found sitting outside after the benediction.

“Next time I’ll stay for the whole thing,” he said. Two years later the church reported that the cowboy is still helping with Disaster Relief responses and attending church from time to time. God is working on his heart.

For more information about California Southern Baptist Convention Disaster Relief ministries, click here or call 559-229-9533, ext. 255. A training event will be held May 15-18 at Woodward Park Baptist Church in Fresno.