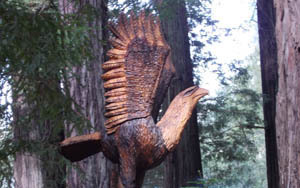 SONOMA COUNTY – After more than two seasons without it, Camp Cazadero again is able to use its chapel.

Leaders credit California’s Campers on Mission, a group of about 80 members who volunteer with handyman projects at various Christian locations as they travel.

“Campers on Mission came in and took the lead on what was a massive project,” said Loretta Van Peborgh. Her husband Paul is president of the Camp Cazadero board of directors. “They’re our angels. They’ve been coming almost one week a month to invest in the camp.”

The retrofitted chapel is just one of innumerable projects Campers on Mission have done over the last 14 months at Camp Cazadero, which had suffered from a lack of maintenance for several years.

The 20-acre camp – 10 developed acres – nestled among massive redwoods two hours north of San Francisco, yet within a 30-minute drive of the coast, was started 59 years ago by Redwood Empire Baptist Association. Three other associations now also own the camp: CostaMeda, Mendo Lake and Golden Hills.

It may be the only association Baptist camp in California. The more well-known Jenness Park Christian Camp is owned by California Southern Baptist Convention, and hence by all the nearly 2,200 congregations in CSBC.

Known as “Camp Caz” by its associations, Cazadero can provide lodging for about 125 people, with 13 dorm-style rooms that each include bunkbeds, a double bed and bathrooms; plus a lodge with double-bed rooms and convening space for about 50 people; a conference center for about 30 people, kitchen/dining hall, prayer garden and new this year, an archery range.

“We had roofs leaking, kitchen with everything not working, the chapel was thought to be unusable,” said Ray Pardee, a member of the camp’s board of directors and president of the California chapter of Campers on Mission.

“It was from the Lord,” Pardee said. “The camp was in trouble and somehow or other God put me there – and I don’t think it was by accident. I see it as the Lord working. You’ve got a camp that has been used by God for ministry and salvation decisions by many people including missionaries, church workers and pastors – Rick Warren was a lifeguard there and made a decision for Christ, and now we see the work he is doing at Saddleback – and I see that God’s got more for the camp to do.

“When I started finding out what was going on and how much maintenance was needed, that’s when I brought in Campers on Mission, and my church, too,” Pardee said, speaking of Bethel Baptist Church in Concord where he is associate pastor. “Some came from as far south as San Diego, and north up to the Mother Lode.

“We’ve installed windows and sliding glass doors, done a lot of painting and replacing things; we’ve cut down trees. I don’t know what we haven’t done up there,” the Campers on Mission president continued. “I’ve made 14 trips to the camp myself, and I’m going again next week to work on some things in the kitchen.”

Some of the downed timber has become benches in the prayer garden, and one volunteer carved a sculpture of an eagle that is tucked away for the alert spotter to find.

Word of Camp Cazadero’s renovation has spread, and as a result, the number of camps has increased, from nine in 2012, to 18 in 2013, and already this year, 22 camps are scheduled.

“At this time, we are booked heavily from June through the second week of October,” Loretta Van Peborgh said.

In addition to its peaceful setting, Camp Caz has a policy of hosting only one group at a time, which increases the campers’ sense of personal safety, which is particularly attractive to the groups who at one time were housed in “refugee camps,” Van Peborgh said.

She and her husband Paul live in Santa Rosa, where both have full-time jobs. They have been involved with the camp for 18 years, most as directors of the two weeks of children’s camps. They became the volunteer acting leadership when the former director unexpectedly left in July 2012.

They are onsite during each of the camp’s five weeks of summer camp – younger children, older children, youth, young adults and senior adults. (Other camp weeks and weekends provide their own programming.) A caretaker lives onsite and pays rent to live in the director’s home, while volunteering his caretaker services.

In addition to a lack of maintenance, the camp was found to have some financial and legal issues that needed to be worked out. They too are being addressed, Paul Van Peborgh said.

“At first there was a lot of fear, a sense that ‘we don’t know what we don’t know yet,'” he explained. “Now, we know we owe the government a known amount that we are paying back on a monthly basis, which will be paid off in 18 months or sooner.

“We are two steps away from being in complete compliance with all our ducks in a row, and we have gotten back our non-profit status from the state,” Van Peborgh continued. “For the first time in years we’re looking at a five-year plan rather than crisis management.”

Glenn Prescott, executive pastor of Tiburon Baptist Church, is a member of Cazadero Baptist Camp’s board of directors.

“I have walked away from the last three board meetings knowing that the camp is in the best shape it has been in my 10-plus years of intimate association with it,” Prescott said. “This turnaround for Cazadero is nothing short of a miracle. God is good.”

Van Peborgh added, “We’re seeing so many different signs of what God has orchestrated. When we’ve needed money, it’s arrived. When we needed repairs, God brought the people with the skills needed. It is such a long litany of times God has provided above and beyond our needs.

“God answered prayers we had not yet uttered,” the board president continued. “God has been watching over us when we didn’t know the need was there.”