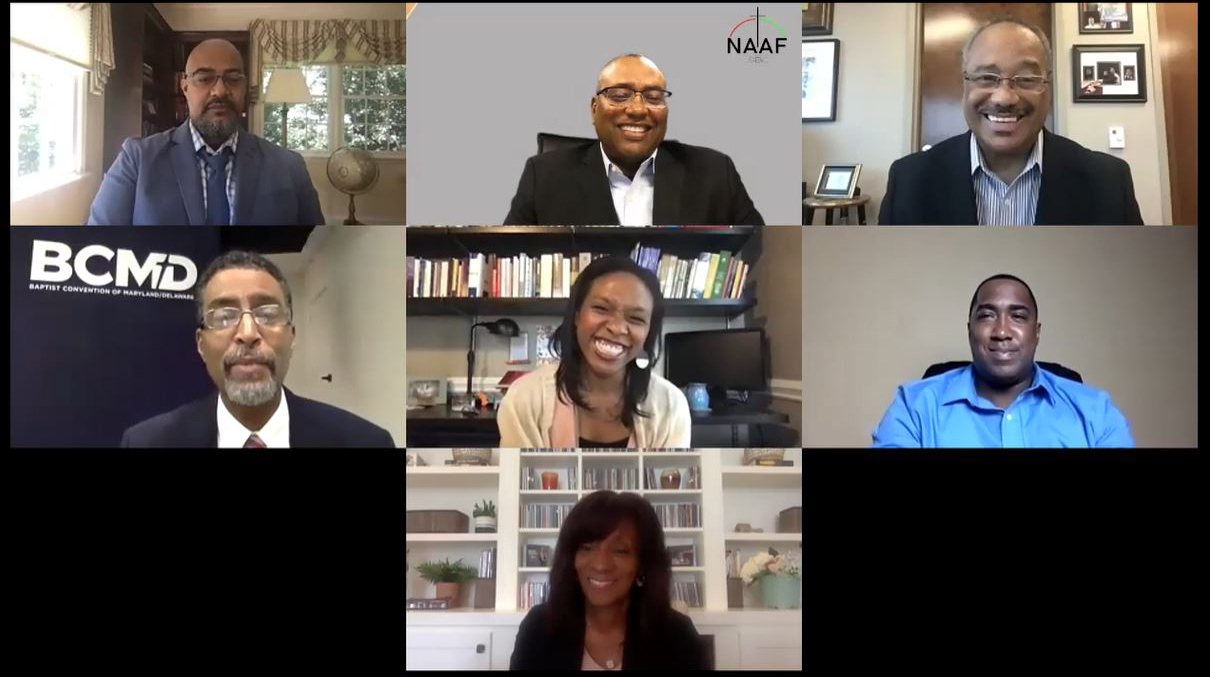 “This was the first time in all of my years of pastoral leadership that I felt the urgency to go beyond the preaching moment, in terms of addressing justice and issues of racial disparities in our city, in our country, and just being a voice and being a part of local protests as the church. I found that … being a steward of justice is a pastoral responsibility and a church responsibility, that we are also stewards of justice.”

“As focus shifted from the pandemic to the racial crisis in our land at the end of March, that compounded on top of the pandemic really created this kind of a moment and a season in our country that I have never experienced before,” said Williams, who also serves as NAAF vice president.

Addressing justice and racial disparities was one of many topics discussed during the town hall, including racism in the church and society, maintaining Christian behavior while engaging in politics, equity within the SBC, and the work and survival of the church during the COVID-19 pandemic.

Luter, in addressing racism among Southern Baptists, recalled his election in 2012 as the first Black president of the SBC. Shortly after his election, ABC News featured him as Person of the Week, and President Barack Obama called to congratulate him.

“I’ve never said this publicly, but when I was elected as the president of the Southern Baptist Convention, there were churches across the country that got out of the convention, that sent their letters in, and said that, ‘We will never be a part of convention where a Black man is president.’ That’s just crazy, yet these people say they’re going to heaven. So, it’s something that needs to be dealt with,” Luter said.

Luter praised leaders including SBC President J.D. Greear and SBC Executive Committee President Ronnie Floyd, who have vocally and proactively worked to make the SBC more diverse. But Luter affirmed the comments of other panelists when he said “we need more of our Anglo brothers to stand up against racism as much as they stand up against abortion, as much as they stand up about the Bible being inerrant, we need Anglo pastors to stand up and say that racism is wrong, and it needs to be addressed.”

Luter’s comments echoed those of Lumpkin, the youngest pastor on the panel, who said the perceived lack of a Gospel witness to racial inequality threatens to distance younger pastors from the denomination.

“It seems like the denomination as a whole seems to look at the issue as maybe more of a passing project for some individuals and it’s kind of optional overall,” Lumpkin said. “Other issues, like religious liberty [are] fully supported and pushed by SBC leadership. And I think this can result in this unintentional feeling that there is the ability to put issues that matter, or maybe the issues of racism and injustice, maybe they don’t matter to the leadership, so they’re not being supported.” Lumpkin clarified that he also supports religious liberty.

Each panelist offered insight from their respective areas of leadership, with Newbell addressing Christian behavior in politics.

“Unfortunately, the two-party system has infiltrated the church, and it’s been … idol worship for many of us. We’ve got to ask ourselves are we bowing to the Lord or bowing to a political system,” Newbell said. She sees the Gospel as politically transcending, and encouraged churches to stay on mission during the 2020 election cycle and to hear others’ sorrow.

“We need to buckle up because November’s going to be hard,” she said. “…Our church members are being fed, and so we’re going to have to be prepared as leaders to speak a better word, because we have a better word.”

“We do not all have the same experiences, but we should be willing to be open and have those courageous conversations that can be uncomfortable in the environments that we’re in. But we need to have them, and we need to listen to each other,” she said. “Listen to diverse colleagues and hear their heart for some of the hurtful experiences they’ve had to endure and to really see them for who they are, to see them and affirm them for the value that they bring to the table.

“Get this right though, we also have to embrace our own shortcomings,” said Nelson, who is the highest-ranking female employee at an SBC entity. “And so that means every team member has to be encouraged to really examine their own heart. I believe that this is a heart issue. And really to recognize those conscious and unconscious biases we have.”

Smith, a state executive, addressed the health of churches during the COVID-19 pandemic that has exacerbated mental health issues. He encouraged churches to remember their biblical foundations.

“Post COVID, I pray Christians, not just people in our society, but Christians will have a little more biblical thought about family and things like the commandments, like honor your father and mother, and how that doesn’t end when you turn 18,” he said. “I think the American dream and autonomous individualism have made us not think about family in biblical paradigms and biblical ways.”

He encouraged leaders to address the needs of the age in a way that proves their Christianity.

“In a world of Me Too, Christians have to make sure that it is obvious that brothers and sisters love each other. And brothers have to make it obvious to sisters that we love you,” Smith said. “In a world of racial injustice and excessive force or brutality, Christians have to make it clear, ‘Hey brother or sister who’s in this particular type of environment, I want to make sure you understand that I love you.’ and when the world sees our love, Jesus says it will be a testimony that we are truly His disciples.”

NAAF Executive Director Dennis Mitchell said the town hall was the first in a planned series of panel discussions highlighting African American perspectives in the SBC. The full town hall will be available at NAAFTogether.org.