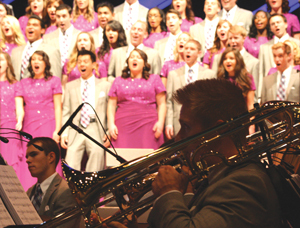 Highlighting the theme, “UNITED: Every ethne, for Christ,” the meeting at Clovis Hills Community Church featured three congregations involved in reaching an ethnic group other than their own. One of those is Chinese Baptist Church of Orange County in Anaheim, which is involved in ministry on the Pala Indian Reservation near San Diego. The church reaches not only Native Americans, but Hispanics as well.

Also featured was Parksdale Southern Baptist Church in Madera, which found itself in a community transitioning from primarily Anglo to Hispanic in the early 1990s. In the process, Parksdale started a Hispanic ministry and in 1997 gave its property and bank accounts to the Hispanic congregation. Today, Iglesia Bautista Nueva Esperanza continues to serve the Madera community.

Fellowship Church in Burbank, a primarily Anglo congregation, was featured for hosting six ethnic churches in its facilities each week, including Afghani, African-American, Arabic, Armenian, Hispanic and Korean. Sunday services begin at 10 a.m., are staggered throughout the day and conclude at 7:30 p.m. Fellowship Church also is involved in church planting, and is helping sponsor four church starts in San Fernando Valley Baptist Association in northern Los Angeles County.

Focus 21 Report
Also during the annual meeting, the CSBC Executive Board reported on Focus 21 Task Force recommendations referred to the body in 2011 for implementation.

The Task Force, a “Great Commission Resurgence-type” committee, was appointed in 2010 and charged with discerning how California Southern Baptists could “most efficiently and effectively focus our efforts for the glory of God in fulfilling the Great Commission.”

Don Fugate, chairman of the Executive Board and pastor of Foxworthy Baptist Church in San Jose, said the Board considered the recommendations and reported on four of the seven. He noted the remaining three would be studied and reported to the 2013 annual meeting.

Almost 2,200 churches identify themselves as members of CSBC; however, those meeting the definition of “cooperating” number 1,108 as of Sept. 12, when the Board’s report was adopted.

Planning for the Future
Fugate noted the Board was recommending a change in the CSBC Executive Board bylaws in relation to the “planning for the future” recommendation, which addresses the process of electing an executive director. The Board will consider the issue at its January meeting.

Enlarging California’s Influence
A task force recommendation messengers considered was “enlarging California’s influence,” dealing primarily with California Baptist University seeking a larger trustee board and a larger number of “global trustees,” defined as members of Southern Baptist churches in the United States or churches cooperating with their respective Baptist conventions outside the U.S.

Several messengers questioned the definition of “evangelical churches of like faith and order” while others questioned who would arbitrate such matters.

David Wilson, messenger and pastor of Grant Avenue Baptist Church in Redondo Beach, said unless “like faith and order” was defined, “I just don’t think we can approve this. It may be a term we use a lot, but I think each church uses it differently.”

However, other messengers affirmed the university for its growth from 808 students in fall 1994 to more than 6,000 in fall 2012, and assured the trustees would be properly vetted by the university and the Convention’s committee on board nominations before being brought to the convention in annual session for election.

Montia Setzler, messenger and pastor of Magnolia Avenue Baptist Church in Riverside, explained, “We have a great deal of influence of who these trustees are, and there are mechanisms in place to make sure these trustees are in line with The Baptist Faith & Message and ‘like faith and order.'”

A voice vote was too close to determine and a ballot vote was taken. Messengers defeated the motion by a margin of 53-47 percent.

Another recommendation dealing with “enlarging California’s influence” allowing the university to solicit direct funding from churches was approved without discussion.

The Board will bring recommendations to the 2013 annual meeting addressing Focus 21 elements to “prioritize church planting,” “prioritize global responsibilities” and “denominational overlap.”

The church planting suggestion calls on changing or eliminating programs so 25 percent of the CSBC Cooperative Program budget can be spent directly on funding church planters in California.

The global responsibilities proposal calls for California to move to a “50/50 split” of CP funds between the state and national convention within five years.

Messengers approved a motion to waive the 50/50 allocation of the CSBC challenge budget (in excess of the CP objective) in years in which a distribution to the SBC Executive Committee would be made using accumulated surplus funds.

A constitutional amendment that would have changed how the number of convention messengers is determined was defeated by 68 percent. The amendment would have allowed churches to elect messengers based on participation in Cooperative Program giving instead of church membership.

The amendment was modeled after the SBC constitution, which provides for election of messengers based on either membership or the amount of money “paid to the work of the Convention.”

Norm Aycock, messenger and pastor of Crossover Church in Rosedale, said, “My concern is that this (amendment) does not allow more participation. Many churches in the past have been able to have enough members to field more messengers. I hate to say this, but this sounds like money votes and I don’t like that.”

Howard Everett, messenger and co-pastor of River Church in San Diego, said, “I’d rather it (messenger count) be based on what they bring to the table. A smaller church ought to be recognized.”

A number of constitution and bylaw amendments related to officers of the Convention were adopted this year, one of which eliminated the position of second vice president and another giving the Convention’s planning committee the responsibility of appointing the music director for the annual meeting.

D.D. Alexander, pastor of Holy Tabernacle of God Baptist Church in Los Angeles, had 69 percent of the vote for vice president, over Daniel Cassels, pastor of Life Way Fellowship in Santa Maria.

Roger Byrd, a member of Woodward Park Baptist Church in Fresno, was appointed music director. He is music and worship specialist for the Convention.

Some 400 messengers registered, along with 164 guests.

Adrian Wells, music director for New Seasons Church in San Diego, led worship for the annual meeting, along with a team from his church.

Events held in conjunction with this year’s meeting included gatherings for Hispanics, Chinese, African-Americans and Filipinos, as well as the Pastors’ Conference, California Women’s Meeting, On Mission Celebration and Fellowship of Church Musicians. Younger Convention leaders participated in a one-day NextGen conference.

The 2013 annual meeting is set for Oct. 22-23 at Shadow Mountain Community Church in El Cajon.