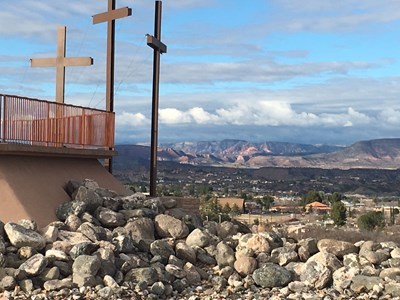 NORTHEAST CALIFORNIA (BP) — Standing with my feet in the water on the banks of Donner Lake, I was in awe of the pristine summertime scene. The clear mountain lake against the deep blue sky, with the lush-forested Sierra Nevada Mountains towering above me, made an impression on my soul.

It’s hard to believe that just mere miles from the lake one of the most horror-filled stories of the American West unfolded in 1846 as the Donner Party’s 89 travelers struggled to survive a fierce winter in harsh terrain, their number reduced to 45, as claimed, in part by cannibalism.

Welcome to the mystery of the West, a region of gorgeous mountains, forests and canyons — and large “meccas of the flesh” that draw people from around the world. Multifarious marijuana salesmen abound as do New Age gurus plying their trades. In slower paced rural areas, meanwhile, complacency can be king.

Still, Jesus is working to reconcile the wild and wayward West unto Himself and to create a unique legacy all His own.

Why read about life in the West or ever visit here? Home to about 77 million of us, God’s story here eternally eclipses those of Mark Twain and John Wayne put together. More fascinating than gold rush is the “God rush” of many believers who have been transformed by the love of Christ. Robbing a train does not take much creativity when compared to following the Lord in a culture of rampant individualism.

Mark Twain, upon his first visit to Reno and Carson City, described the nature of the area. “It was a place of sin, loose women, whiskey and gambling,” Twain wrote, remarking that “it was hard to be a good Presbyterian and I did not long remain one.” In many ways, times have not changed.

As a young boy growing up in Reno decades ago, I had little realization just how rich the culture was in my own backyard. In its earliest days, Reno was

one of the stops on the first Transcontinental Railroad and is a short drive from Virginia City where miners hauled out great silver discoveries in the 1860s and 1870s Comstock Lode.

Life for early settlers was harsh. Just surviving in the West for generations was a major accomplishment. My great-great-grandfather William was one of the early settlers on the south side of Vancouver Island in the late 1800s and worked hard to develop the unruly forested land. My great-grandfather Philip settled down in Nevada in the early 1900s, serving as a cook for men working in the mines in Goldfield before his labors in the kitchen at the University of Nevada in Reno.

The West’s coarse conditions provide just the kind of environment to create some of the most unique characters who have lived anywhere at any time. More vivid than the stories of wild outlaws and their debauchery, how about the story of the men like my father who grew up in the home of abusive alcoholics who were transformed to resemble Christ? Or what about the story of missionaries and church planters who risk everything to start over out West? How about men and women who stand up for truth in city leadership, greatly outnumbered on all sides?

These stories must be told, for this is an exciting moment here to join in the Holy Spirit’s work. People have moved westward for generations for the chance to carve out their own future and make a new way of life. Strong westward migration still creates countless new doorways for relationships, character development and faith.

The Jesus of the Bible does more than intersect culture with spurs on His feet but with a crown of thorns on His head. More zealous than Lewis and Clark, He is the master pathfinder leading men and women to discover the true way (John 14:6).

Dangers may come with the territory, literally. But the Spirit of Jesus in the West never rests.