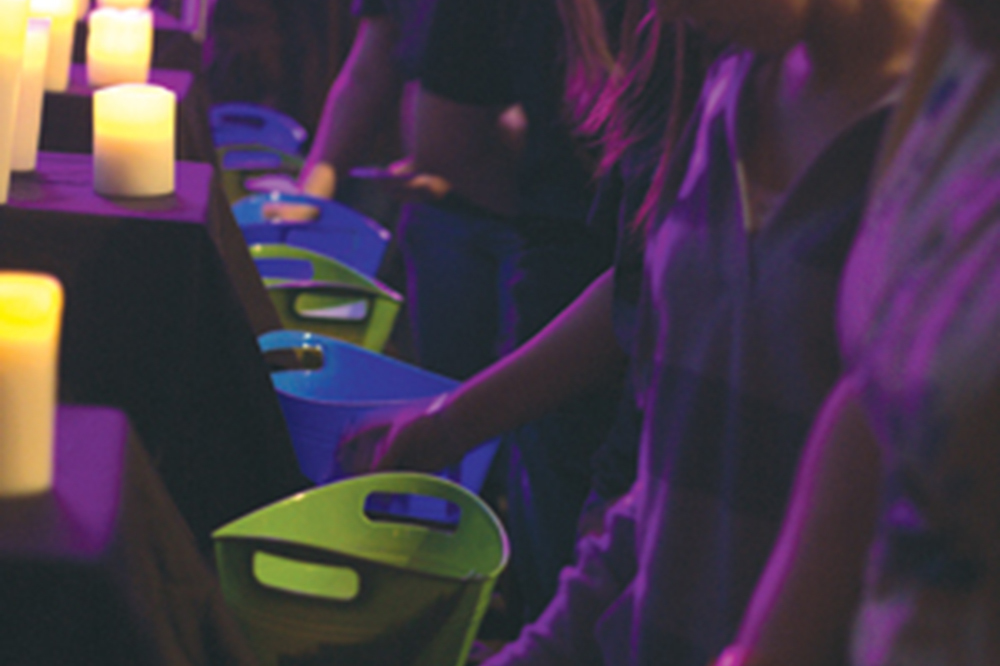 SANTA CLARA – Almost 2,000 students and their leaders were exhorted through the Word, encouraged with fellowship and entertained by bands and games during the final Tsunami Student Conference, held Dec. 28-30 at the Santa Clara Convention Center.

Daryl Watts, student and family specialist for California Southern Baptist Convention, which sponsors the annual event, announced at the end that it was the final session in the life of Tsunami – but promised a new and better student conference in its place.

Watts, who has led the CSBC student conference for 21 years, told the students with tongue-in-cheek drama, “I’m tired. I’m not just tired physically, I’m tired of Tsunami. I’m tired of the name.”

He added, “It’s time to kill Tsunami. Turn out the lights.”

Participants vocally rebelled, the lights in the cavernous hall went off, and a video started playing illustrating the launch of the Space Shuttle and introducing “Ignition.”

Watts then told the students and their leaders to “get ready for ‘Ignition'” and touted that it would be “different and better” because there would be two conferences running concurrently that would “attract more students than ever before.”

He added the new event would be shorter – only two instead of three days – and would be more “focused and intense” for “the greatest generation of students California has ever seen.”

Encouraging youth and their leaders to pray for “Ignition” and remember the commitments they made at Tsunami, Watts exhorted the group to leave “excited, celebrating and ready to change the world.”

Earlier, Billy Beacham, president of Student Discipleship Ministries based in Texas, challenged students and their adult leaders to commit to 40 days of having a daily quiet time with God.

Using the acrostic “ESCAPE,” Beacham challenged students to become what God wants them to be:

His primary exhortation to study God’s Word and claim scripture led Beacham to challenge the audience to spend four weeks in quiet time and studying the Word. To those who made the commitment, Beacham offered a 13-week study guide. Thinking he’d have to ship some of his supply of 2,300 guides back home, Beacham was pleasantly surprised that he ran out and didn’t have enough for all who wanted them.

He said he does a lot of conferences nationwide and has been to a couple recently in California, but the response was nothing like the response from students attending Tsunami.

“It’s amazing to see the hunger in your hearts for God.”

Beacham encouraged students to “hide God’s Word in your heart” and “don’t try to be someone you are not. Be who God made you to be.”

He said more often than not Christians settle for “pitiful stuff. We need to be transformed by the renewing of our minds. Don’t settle for less than for what God put you here.”

Jeff Wallace, a student and young adult minister in Decatur, GA, challenged students to “fail forward.” He said the only way that can be done is through the grace and power of God as recorded in II Corinthians 12:9.

He noted: “It is inevitable that you will fail. So when you do fail, don’t compare yourself with others. If you do, you’ll only be a cheap copy. We all have to be comfortable being who we are.”

Wallace added that Christians should “benefit” from their failure. “It has to motivate you to be better and not bitter. We must define our failures to be lessons, and understand there is a story within a story.

“When you go through hard times, fail forward. Don’t let failure kill or destroy you, but make you a better person.”

“We don’t have enough students that are raised up to be Bentleys with the mindset that they are fearfully and wonderfully made like God expects,” Wallace said.

He challenged students to realize that “God is perfecting you by taking you through some stuff.”

“Life is about perspective,” Wallace continued, “and we must look at the glass as half full and not half empty. When we humble ourselves, God can use us. When we go lower, He can lift us up higher.”

Students also were entertained and encouraged by recording artists Shonlock and Superchick as well as Travis Ryan, who led worship at Tsunami for the third year.

Tom Stringfellow, director of missions for Sierra Butte Baptist Association and architect of CSBC’s Feeding Those Who Feed Us migrant ministry, gave an impassioned plea for the effort. The students responded by giving nearly $5,000 for 2012 ministries.

Each year, four outstanding students are recognized during Tsunami based on recommendations from their respective youth ministers. Those selected this year were Elise Clark of East Clairemont Baptist Church in San Diego, Kimberly LaMar of Sequoia Heights Baptist Church in Manteca, Elianeth Ramirez of El Encino Baptist Church in Fresno and Grace Wilkins of Hat Creek Community Church in Hat Creek.

Also during the conference more than 300 students responded to the Tsunami theme “Self Less Self” by committing to read their Bibles daily in 2012. Nearly 300 students lived out the theme by participating in ministry projects throughout the Santa Clara/San Jose area.

Twenty-six students made public professions of faith in Christ, 87 rededicated their lives, two committed to be baptized and four responded to God’s call to missions.