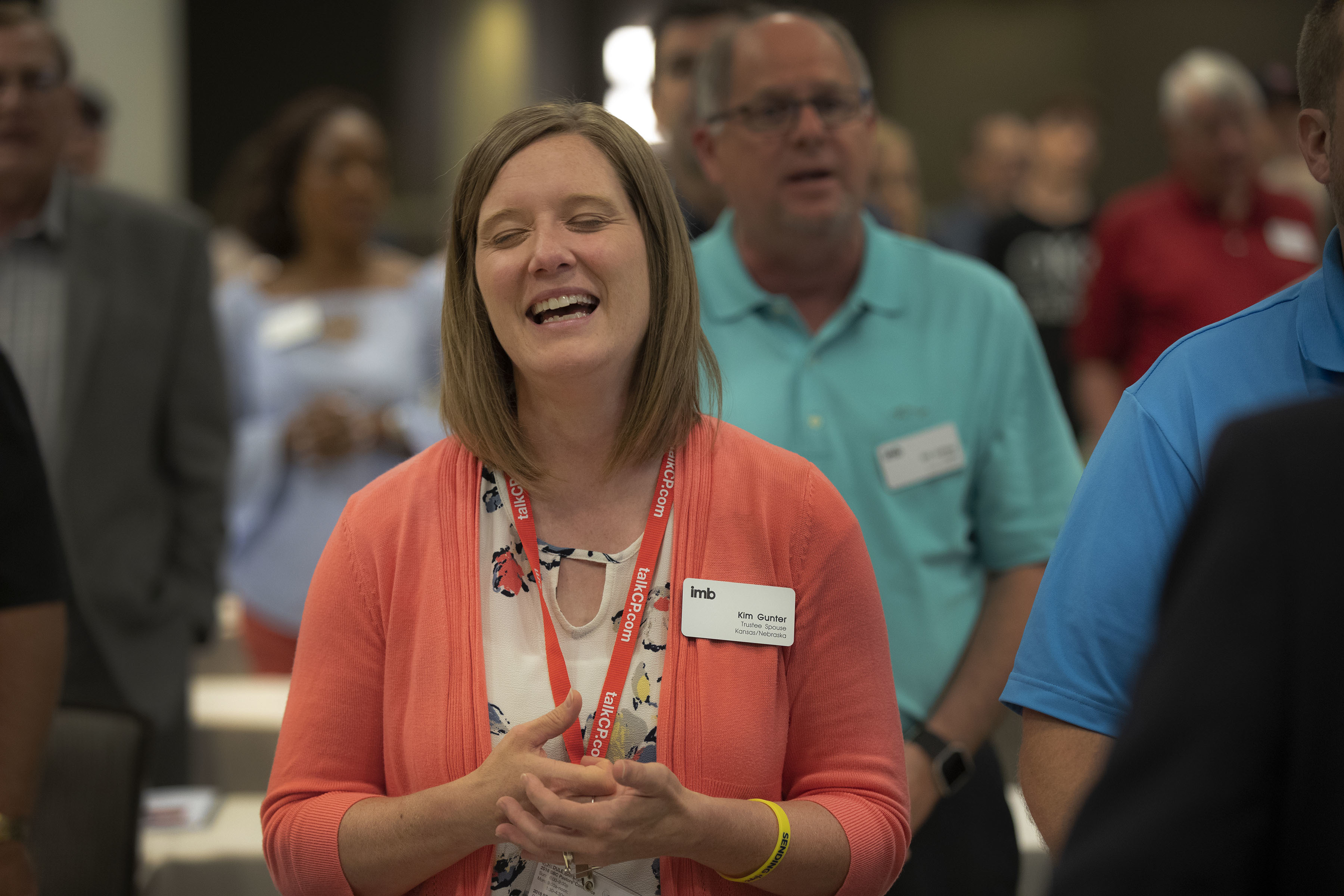 DALLAS (BP) — International Mission Board trustees approved the appointment of 47 new missionaries sent by Southern Baptist churches to take the Gospel to the nations during their June 10-11 meeting in Dallas.

The new missionaries were part of a Sending Celebration June 12 during the evening session of the SBC annual meeting at the Kay Bailey Hutchison Convention Center.

Trustees also heard an update on the presidential search; received a financial report on the entity; reiterated IMB’s “zero tolerance” policy on abuse; and elected 2018-2019 officers during their meeting held in conjunction with the June 12-13 Southern Baptist Convention annual meeting in Dallas.

Chuck Pourciau, presidential search committee chairman, reported the committee is making progress and working in unity toward determining God’s direction for the entity’s next leader. He said the committee has moved from determining what kind of person they’re seeking to considering candidates.

“This is a great committee,” said Pourciau, senior pastor of Broadmoor Baptist Church in Shreveport, La. “God’s been in our midst, and I thank God for how He led [Rick Dunbar] in putting together this committee.

“We are committed to finding God’s leader,” Pourciau said. “We want to see God glorified.”

In their support services committee, trustees reviewed IMB’s 2017 audited financials and its current financial position. “We are on strong financial footing, and by God’s grace we have the resources we have,” reported Seth Polk, the committee chair. “We thank God for the faithfulness of His people in giving.”

Trustees also adopted a resolution of appreciation for the work of Randy and Kathy Arnett, who served as missionaries from 1986-2018, and died on March 14 while serving in Africa. The resolution reads: “The International Mission Board, SBC, herein expresses deep appreciation for faithful service to God through this board and pledges special prayer support for the family during days ahead.”

In response to issues arising in the SBC in recent months, trustees and IMB leaders reiterated the board’s policy on abuse and harassment.

Dunbar said, “The IMB leadership and the trustees want you to know that we are committed to zero tolerance for child abuse and sexual harassment among our personnel — and we are also committed to communicating and cooperating with our partners to guard against those behaviors.”

If anyone “sees or suspects something, they need to say something,” Dunbar said, noting IMB policies provide multiple avenues to make a report, including a confidential hotline designated for this purpose: –866-292-0181. If anyone has personally experienced or observed child abuse or sexual harassment among IMB personnel in the past, they are urged to contact IMB through the confidential hotline. It is IMB’s policy to investigate all cases regardless of when they occurred.

Whenever a church, SBC entity, other ministry or any employer sees “IMB” on the resume of someone looking to serve with them, they are urged to contact IMB for a reference. Reference requests can be submitted to IMB’s HR department at references@imb.org. (The full text of IMB’s Statement on Child Abuse and Sexual Harassment is below.)

‘Everything hinges on God’

In his report to the trustees, IMB President David Platt shared two truths: 1) When God is with you, nothing and no one can stand against you; 2) When God is not with you, you have no hope. “Everything hinges on the fullness of God’s presence — everything,” he said.

Referring to Joshua 7:1-12, Platt explained that because of one man’s secret, hidden sin, God’s presence was not with the entire people of Israel. He told trustees, “We cannot underestimate the consequences of one man’s sin. Our sin never just affects us. Our sin always affects the people around us.

“I want to plead with you, for your own sake, for the sake of people right around you … for the sake of these missionaries we’re about to send out and, ultimately, for the Name [of Jesus] — to repent of any hidden or secret sin in your heart,” Platt exhorted trustees. “I want to urge us to repent of sin and to receive the grace that is available in Christ.

“The IMB’s greatest need in trustees and leaders around this room (including myself) is not innovation or organizational this-or-that — the greatest need is holiness and humility before God, that says, ‘I don’t want to hold onto any sin in my heart that will jeopardize the fullness of the blessing of God, not only in my life, but in the lives of those I’m leading, the lives of those I’m influencing,'” Platt said, inviting trustees to spend a few moments in silent confession before God.

Trustees also spent concerted time in prayer for the Walangchung people group of Nepal. The East Asian people has a population of 22,000 who primarily practice Buddhism, specifically Lamaism. There are possibly two known believers among the entire population, and the Bible is not translated into their language. Trustees prayed that God would call someone to take the Gospel to these people.

The next IMB trustee meeting and Sending Celebration is slated for Sept. 26-27 in Richmond, Va.

* The LMCO campaign year historically ran from June 1 to May 31 each year, but that campaign year did not align with IMB’s fiscal year, which runs January 1 to December 31. To help alleviate confusion, IMB finance leaders, in conjunction with the board of trustees, proposed to align the fiscal year and the LMCO campaign to October 1 through September 30. Messengers voted to approve the fiscal year change during the 2017 SBC annual meeting in Phoenix. Therefore, gifts contributed from Oct. 1, 2017, to Sept. 30, 2018, will apply to the 2017-18 Lottie Moon Christmas Offering.

Zero Tolerance Among Our Personnel

We regularly ask that anyone in the IMB who (a) believes he or she has personally experienced child abuse or sexual harassment, or (b) observes it happen to someone else, bring this conduct into the light by means of a secure report to IMB leadership. In other words, if anyone suspects or sees something, they need to say something. IMB policies provide multiple avenues to make a report, including a confidential hotline designated for this purpose: (866)-292-0181.

Anytime we receive a report of suspected child abuse or sexual harassment, we investigate those situations immediately and, if warranted, take the appropriate action to report it to local authorities and remove individuals from IMB employment. In the case of child sexual abuse, if we conclude that one of our personnel has committed child sexual abuse, that individual is terminated immediately. If IMB believes that any personnel has committed child abuse, our practice is to make a report to Child Protection Services in the state where the incident occurred or to the alleged offender’s home state. Moreover, IMB is committed to complying with mandatory reporting requirements and cooperating with any criminal investigations of abuse by our personnel. Further, we are committed to providing compassionate care to anyone who has experienced child abuse or sexual harassment.

Cooperation With Our Partners

All volunteers who serve with the IMB must undergo a 3-part background screening (criminal background check, references, and an interview) to ensure there is no history of activity that would pose a danger to children or others. All volunteers must also undergo training concerning child protection (IMB provides a training video that covers this). Specific resources and guidance for churches and volunteer trip team leaders is available here on our website: https://www.imb.org/for-churches/mission-trip-prep/.

Whenever a church, SBC entity, or other ministry sees “IMB” on the resume of someone looking to serve with them, we urge them to contact us. IMB’s practice is to terminate individuals who have engaged in child sexual abuse or other forms of misconduct. However, in some cases, an individual has resigned before IMB can terminate the individual, or the IMB does not find out about the misconduct until after the individual has left service with IMB. Therefore, IMB strongly encourages any church, entity, or other employer who is considering working or partnering with a former IMB personnel to contact IMB to obtain a reference on that individual. Reference requests can be submitted to IMB’s HR department at references@imb.org. IMB quickly responds to all reference requests by providing a release for that former personnel to sign authorizing IMB to share information from its HR file. In most all cases, IMB will have positive information to share. However, in the rarer cases where IMB has information to share concerning child abuse or sexual misconduct by that former personnel, or the former personnel refuses to sign the release, then the church, entity, or employer will be in a better position to evaluate a future relationship with that former IMB personnel.

The above statements reflect IMB’s present policies and practices. If anyone has personally experienced or observed child abuse or sexual harassment among IMB personnel in the past, we invite you to contact us on our confidential hotline at (866)-292-0181. It is our policy to investigate all cases regardless of when they occurred.