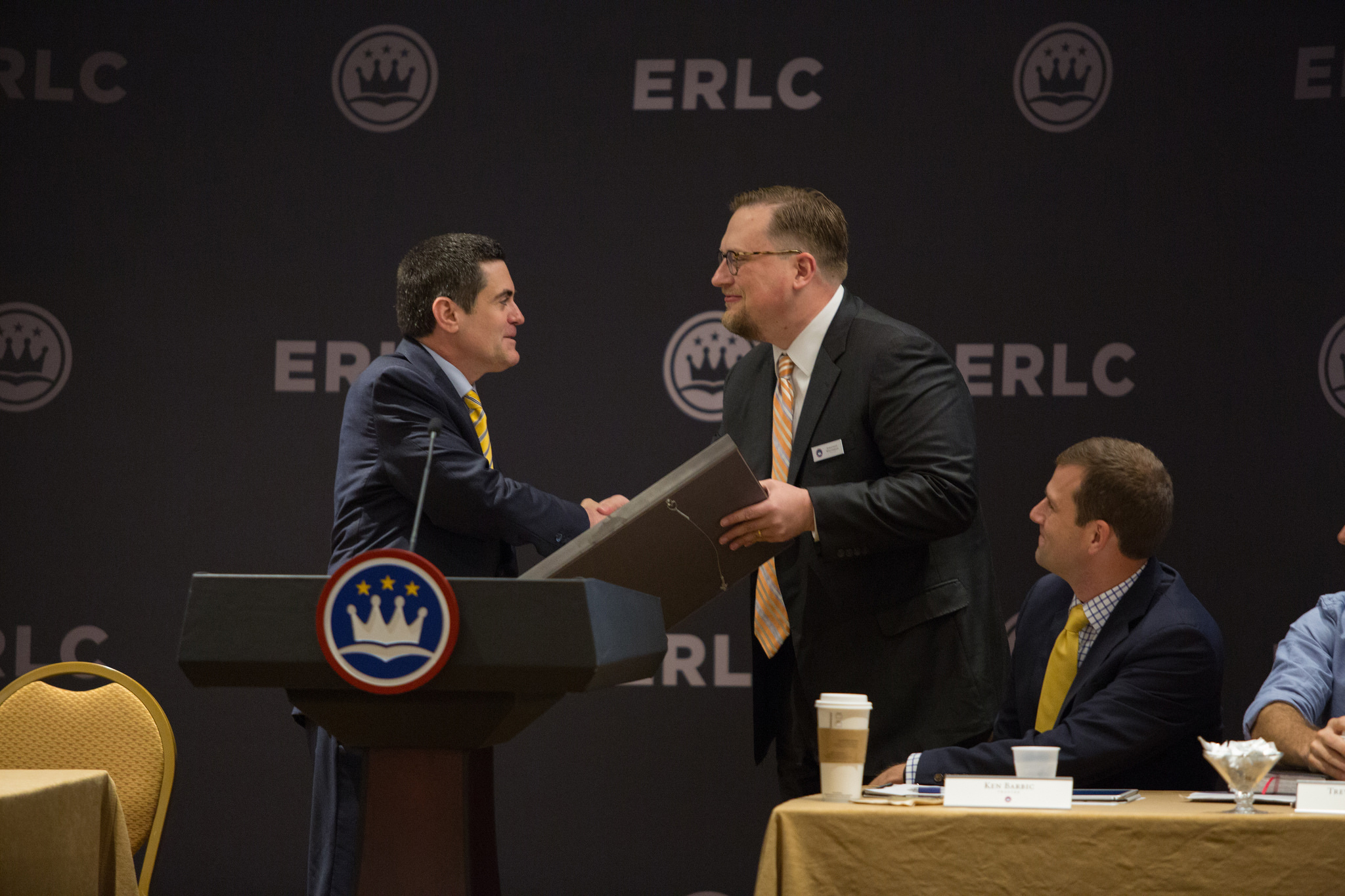 NASHVILLE (BP) — The Southern Baptist Ethics & Religious Liberty Commission is committed to equipping churches to produce justice, holiness and reconciliation with the Gospel of Jesus, Russell Moore told the entity’s trustees at their annual board meeting.

Moore, the ERLC’s president, made his comments during a report to the ERLC board during its Aug. 23-24 meeting at Nashville’s Gaylord Opryland Resort & Convention Center. Trustees approved recipients of two annual awards, adopted a slight budget increase, elected new officers and received reports on the commission’s work in the last year. The board meeting concluded on the day the ERLC’s national conference on parenting began at the same site.

The ERLC’s “central mission” is “to teach and shape and equip churches to form consciences of people who are able to witness to and model the reality of the kingdom of God around us,” Moore told trustees during his report.

In remarks based on Isaiah 56:1-8, Moore said Christians not only should act justly both corporately and individually but their lives should reflect a holiness that marks the people of God.

This year, the ERLC “has been speaking to issues of personal holiness, what it means to be distinct. And frankly, this is a crisis among us,” he told the trustees. “Many of the issues we’re facing right now in terms of holiness among the people of God have to do with those hidden, subterranean sorts of things that we don’t even see until they become a crisis” — issues such as pornography and addiction to drugs.

The commission “spent a lot of time this year finding models, congregations that are in a particular sort of way doing good work when it comes to preaching, teaching, discipling, evangelizing, dealing with real needs of people across the board,” Moore said.

One of the ERLC’s “driving factors” has been to ask in whatever initiative it is working on who is overhearing this who thinks he or she is “too good for the Gospel” or “too bad for the Gospel,” he said. The ERLC wants to say to those who think they are beyond the Gospel, “There is a new family for you,” Moore said. “There is a future forward for you.”

The trustees unanimously approved Tennessee Gov. Bill Haslam as the recipient of the Richard Land Distinguished Service Award, which goes annually to a person displaying excellent service to God’s kingdom. They also approved unanimously the Little Sisters of the Poor for the John Leland Religious Liberty Award, which is given yearly to a person or group exhibiting a deep commitment to religious freedom.

Haslam, who has served as governor since 2011, “has been involved in a multitude of questions” the ERLC has worked on, Moore said. These have included the sanctity of human life, freedom of conscience and foster care, he said.

He has been “an unbelievable help and encouragement to the ERLC,” appearing at its national conference and meeting with the entity’s interns, Moore told trustees. In addition, the governor and his wife Crissy are “unbelievable witnesses for Christ,” he said.

The Little Sisters of the Poor is a Roman Catholic order that serves the elderly poor but became embroiled in a legal battle as a result of the Obama administration’s abortion-contraception mandate, the rule implementing the 2010 health-care law that requires employers to provide their workers with coverage for contraceptives, as well as drugs or devices that can potentially induce abortions. Though the Supreme Court gave the Little Sisters a partial victory last year, they and other challengers of the regulation await a final resolution.

Though we have “great theological differences” with the Little Sisters, Moore said, they “have stood up for freedom of conscience in ways that are going to be applicable to everybody across the spectrum.” These women “have shown not only pluck and determination through this but also a very sweet spirit and a willingness to work together with other people for the sake of religious liberty,” he said.

In other actions, the ERLC trustees:

— Passed a response to a motion at the 2017 SBC meeting from Oklahoma messenger Luke Holmes asking all convention entities to consider publishing online the names and contact information of their trustees. In its response, the board said the ERLC “does not release personal information regarding its staff or trustees as personal data is subject to spam, abuse, and security concerns. Trustees may be contacted through the Office of the President.”

In addition, Moore presented a resolution of appreciation to new, at-large trustee Jon Whitehead. The resolution approved by the ERLC’s executive committee commended Whitehead for his work on behalf of Trinity Lutheran Church in Columbia, Mo. The church won an important religious freedom case at the U.S. Supreme Court in June, and Whitehead and his father Michael — lawyers in Kansas City, Mo. — served as co-counsels for Trinity Lutheran.

At the end of the meeting, Moore introduced Joseph and Palmer Williams to trustees. The husband-and-wife team of lawyers who live in Nashville will assist the ERLC in the advocacy arena, he said.

In its written report, the ERLC cited the following among its events and initiatives during the last year:

— The second annual Evangelicals for Life conference in January in Washington, D.C., cosponsored with Focus on the Family.

— A pre-conference event in April in conjunction with The Gospel Coalition’s bi-annual national conference in Indianapolis.

— The ERLC Academy for nearly 300 master and doctoral-level students, as well as others, in May in Nashville.

— Three friend-of-the-court briefs with the Supreme Court and two more with lower courts.

— Two Capitol Conversations LIVE events in Washington, D.C., that addressed truth in journalism and the decision in the Trinity Lutheran case.

The ERLC staff reported on the continuing growth in communications, including:

— A record social media interaction of 25 million impressions and views.

— A reach of nearly nine million on the ERLC Facebook page, a growth of more than 200 percent.

— An increase to nearly one million downloads and subscriptions for the ERLC’s podcasts.

Three trustees were recognized upon completion of their service to the ERLC: Chairman Ken Barbic, an at-large trustee; Bernard Snowden of Virginia; and Curtis Starner of Illinois.