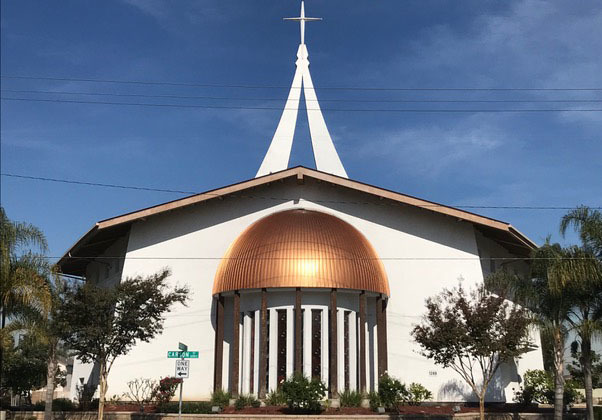 Quentin Oden has been Triedstone’s pastor since 1996, full-time since 2000, when he followed God’s instruction to leave a solid career at Raytheon, a global military technology firm.

“God was honoring Edward Beasley for starting the church and giving me a message at the same time,” Oden said. “The square root of 64 is eight, and eight is the number of new beginnings.

“It was such a whirlwind of events as God moved,” Oden continued. “The Lord waited seven months before sharing with me that the organizing date and the escrow closure date was the actual 64th birthday of the church. I’m still blown away by how aggressively He moved for us. God working through even the smallest details has been awesome to witness.”

That wasn’t the only “64” in Triedstone’s story. It was exactly 64 days from the time the pastor and his wife Shelley noticed the building just off the 405 freeway until the church closed on that property. Also, the property Triedstone sold and the property they purchased closed the same day before 10 a.m. on Aug. 16, 2017.

The church where about 100 people worshiped on Sunday wasn’t even for sale.

“Someone knocked on the door and offered $2 million for the property,” Oden said. “Until that moment, we hadn’t seriously considered moving. But $2 million? For a building that was, at best, past its prime?”

God directed the pastor to a real estate broker, who suggested a counter-offer of $3.5 million for the property within a block of Culver City, about 10 minutes from Sony Pictures. Near the end of the due-diligence period, the initial buyer wanted to renegotiate their offer by dropping the price $1.2 million. Triedstone rejected that, and 20 hours later, God sent a new buyer offering $4.2 million.

Watching God’s activity, the Odens prayed for God to show them the site of their new location.

“We were in the Diamond Lane on the 405 and traffic was at its peak when my wife said, ‘That’s a nice church,’” Oden recalled. “Despite the traffic, I thought to myself, ‘Something is going on here. Would I ever be satisfied if I didn’t stop and look?’

“So, we turned aside like Moses to get a closer look at what God was up to.”

The name Triedstone comes from Isaiah 28:16, which in the King James Version refers to “a tried stone, a precious cornerstone.”

“Pastor Beasley was led to this often-

overlooked passage as God’s prophetic declaration about the character and destiny of the church he had been called to plant,” Oden noted.

They found at the new location a huge building with a stunning, gold-colored overhang, which had been on the market for more than two years. The second floor had not been completed, the property in Carson had fallen out of escrow twice, and the price had been cut from $6 million to $4 million.

“All we have to do is finish off the second floor and the commercial kitchen,” Oden said. “The original owners ran out of money to finish the project, and the Lord made sure He gave us enough additional money to do that” (which came from the sale in 2015 of extra property the church owned).

“Because the Lord decided to move so miraculously, I have asked a multitude of questions about how stuff like this happens,” Oden admitted. “I don’t know all that I would like to know. But the one thing that has been clearly conveyed to me is that back in the year 2000 I took a 50 percent cut in pay to become Triedstone’s first full-time pastor.

“The Lord told me, ‘If you had not done that, I wouldn’t be doing this,’” Oden told the CSB. “The Lord has had His hand on us, and He’s been making it real obvious. The conversations the Father and I were having through the process, I’ll never forget any of it. He’s teaching me about Ephesians 3 and 20: “Now to Him who is able to do above and beyond all that we ask or think — according to the power that works in you — to Him be glory in the church and in Christ Jesus to all generations, forever and ever. Amen.”

Oden noted how Satan would attack with something unexpected, and God would counterattack with His greater power.

“The Holy Ghost was saying, ‘Just believe me; I’m doing this,’” Oden said. “For some reason, this has some urgency in the Kingdom.”