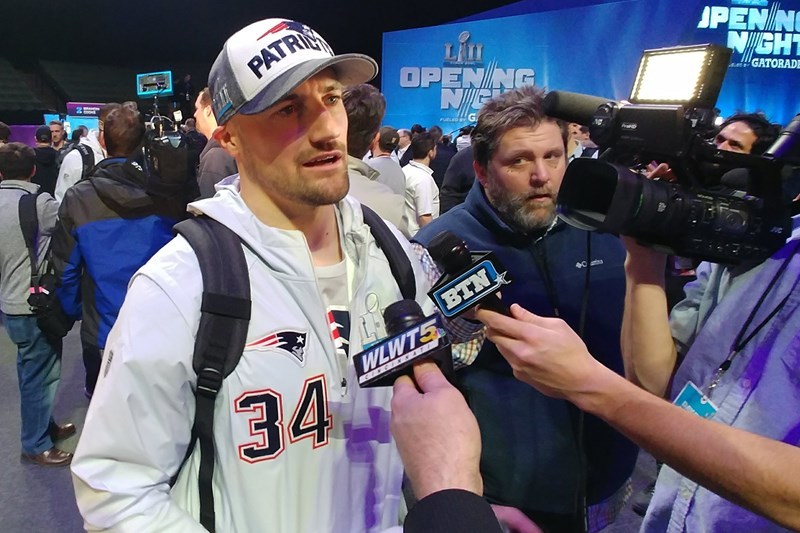 MINNEAPOLIS, Minn. (BP) — Another Super Bowl. Another year with the New England Patriots playing in it.

It’s no secret that the Patriots over the past two decades have been the most successful franchise in the NFL, if not the single most successful franchise in all of professional sports. Tom Brady, Bill Belichick and others may seem to be omnipresent when it comes to the Super Bowl. This year’s appearance is the Patriots’ eighth since Brady took over as starting quarterback in 2001.

But from a spiritual perspective, there’s something new to this team. Jack Easterby, who serves as the character coach and chaplain for the Patriots, said new faces on the team this year have brought a new depth and spiritual vitality to the team.

“Rex Burkhead and Brandin Cooks are both absolutely phenomenal,” Easterby said. “We’re talking about elite Christian leadership in both of those guys — love the Lord, love their families, Bible every day. They have been tremendous lights for Jesus in this building.”

Burkhead, a running back who played at the University of Nebraska, came to the Patriots this year from the Cincinnati Bengals.

“It’s been a blessing, for sure,” Burkhead said about joining the Patriots and getting plugged into team Bible studies and chapels. “We’ve grown in so many ways throughout this season through adversity.”

His foundation as a follower of Christ, Burkhead said, is central to what he does on the field.

“It gives you purpose, something to play for, to go out there and glorify God, not to glorify yourself or have motivations to play for awards or certain stats or trophies or whatever that may be,” he told reporters Monday (Jan. 29) during the Super Bowl LII Opening Night event at the Xcel Energy Center in St. Paul, Minn.

Easterby said Burkhead is a humble man, who’s always the first one to ask about players in need and what he can do to help them.

When Burkhead got hurt playing against Pittsburgh, he seemed more concerned about the welfare of his teammates than he was about himself.

Cooks, a wide receiver in his first season with the Patriots after three years in New Orleans, said playing in the Super Bowl for the first time is “an absolute blessing.”

“This is what you dream of ever since you’ve been a kid and knowing about the Super Bowl,” he said. “You just hope to get there one day.”

Cooks’ Twitter account is full of Scripture verses and spiritual encouragement: “Give thanks to the Lord. His love endures forever.” “We are fearfully and wonderfully made!” “Don’t believe every spirit but test every spirit.”

Easterby said Cooks’ energy and enthusiasm on the team has earned the commendation of the coaching staff, encouraged his teammates and embodied Colossians 3:23: “Do everything as working for the Lord and not for men.”

For Cooks, while playing in the Super Bowl is a blessing, it also comes with a responsibility.

“This is another opportunity to use this platform that I have to glorify God and the gift that he’s given me to be able to play this game at a high level,” he said. “You’ve just got to revert back to being a glory reflector and being thankful.”

Though he’s not on the active roster after tearing his ACL in training camp before the season started, defensive end Derek Rivers has been a strong spiritual influence on the team, even as a rookie, Easterby said.

The night he tore his ACL and found out his season was over before it ever began, Rivers texted Easterby: “God is faithful. We have a good, good Father.”

“It just so happened in chapel that night that we sang that song [Good Good Father],” Easterby said. “This was totally unrelated. I got the text 10 minutes before we sang. I read that to the players.”

Easterby used Rivers’ attitude as an example to the team of what it means to trust God even in times of difficulty and trial.

While no one can predict the outcome of Sunday’s game, Easterby knows the depth of influence the new believers have had on the Patriots as a whole.

“Same team, new faces. New lights for Jesus,” Easterby said. “We’re supposed to be a city on a hill, and the light is still the same, but the numbers on the back of the jerseys are different.”