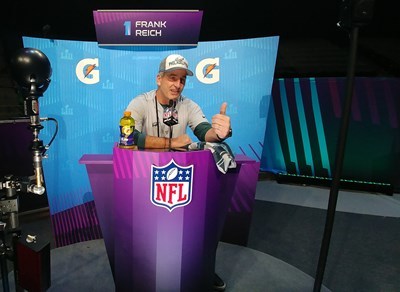 ST. PAUL, Minn. (BP) — Among the list of men who have coached in a Super Bowl, Frank Reich may have a resume that’s unique.

“I would think so,” Reich, former president of Reformed Theological Seminary in Charlotte, N.C., said Monday night about whether he’s the first former seminary leader ever to coach in the Super Bowl.

As offensive coordinator, Reich has played a major role in the Eagles’ success this season. Philadelphia has ranked among the top offenses in the league all year, and their 38-7 drubbing of the Minnesota Vikings in the NFC championship game shows they haven’t slowed down.

But while Reich relishes that offensive performance, he also cherishes the role he plays as a Christian brother to many of the believers on the team.

“We have a lot of fun,” Reich said at the Super Bowl LII Opening Night event at the Xcel Energy Center. “We’re football coaches and players, but we’re also human beings. Part of a coach is understanding the person, and you relate to people on different levels.

“For the guys who are Christians on the team and who believe those things, that’s a very exciting and fun opportunity for me — who believes those same things and who walked in those same shoes — to be able to help understand what it means to be a Christian athlete and how to live that out as a professional athlete.”

He forever earned a spot in NFL history when he did the impossible, leading the Buffalo Bills to the biggest come-from-behind win ever in a playoff game against the Houston Oilers in 1993. Houston led Buffalo 35-3 in the third quarter when Reich, who had started the game because Jim Kelly was injured, engineered an unbelievable scoring frenzy.

Buffalo’s Kenneth Davis rushed for a 1-yard touchdown to open the gates. Then Reich connected for four straight TD passes to put the Bills in front 38-35 before they eventually won 41-38 in overtime.

After a 13-year NFL career, Reich completed his Master of Divinity degree from Reformed Theological Seminary before taking over as the seminary’s president in 2003 and later pastoring a Presbyterian church. He began his coaching career in 2006. His theological background makes him a valuable resource for the Christians on the team.

“It’s cool to be able to go to him for questions,” said Trey Burton, a tight end for the Eagles. “Right before the game, we’re out for pre-game warm-up. Almost every single game, he and I have had a moment where I’ve either given him something I’ve been reading, or he’s given me something he’s been reading, just to get our mind off the game and back on the Lord.”

The Eagles have a strong contingent of players who are Christians, including starting quarterback Carson Wentz, backup quarterback Nick Foles, safety Chris Maragos, wide receiver Torrey Smith and others.

They’ve seen teammates come to know Christ and be baptized this year.

Reich said that influence is one reason for the team’s success.

Understanding what it means to be a Christian athlete, Reich said, means that these players respect their teammates more and want to serve them more — which in turn makes them better teammates and better players.

“It’s been an exciting time, not only on the field but off the field as well for how guys have grown in every area of their life,” Reich said. “I think that’s good for them personally. It’s good for the community of faith of believers who are on the team. But I think it’s been good for the team.”

Reich has enjoyed the Eagles’ path to the Super Bowl this season, and he’s enjoyed what he has seen the Lord doing on the team.

“It’s really fun to have some very personal conversation with guys,” he said. “As much as we all love football, there are other things other than football. To be able to have a personal dynamic with some of these players on that level, personally, it doesn’t get any better.”