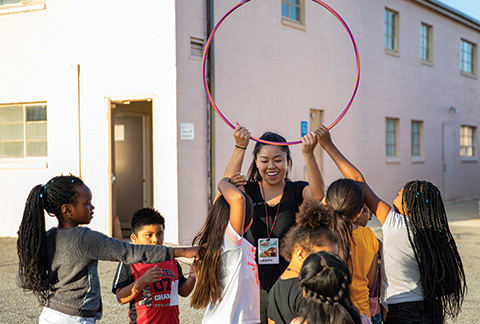 Summer missionaries are the hands and feet of Jesus

FRESNO — Summertime is a season of many things: vacation, relaxation, adventure. But for Christians around America summer also marks the beginning of “missions season.” People of all ages from different churches embark on missions throughout the state, the country and beyond.

California Southern Baptist Convention was no different this summer, commissioning 11 missionaries who are a mix of current college students and recent graduates, supervised by CSBC student evangelism specialist Sherann Kim.

“The summer missionaries made a big impact in California,” Kim affirmed. “There are 39 million people in the state, and 33 million do not know Jesus.”

Each missionary served at a different church in need of some extra assistance. The tasks consisted of filling in whatever role was lacking, which often included involvement in Vacation Bible School.

The North American Mission Board disbanded the summer missions program several years ago — CSBC saw the hole left behind and stepped up to fill it.

“We saw the need and impact the summer missions program made on both the churches and the students,” Kim explained. “It was determined that the program needed to be revived and two years ago CSBC made that happen.

“They needed a coordinator and it seemed perfect. I love missions and I love students, so combining them was great.”

Each student had a different experience over the summer. Jamall Bradshaw, a senior criminal justice major at California Baptist University and a member of Orangecrest Community Church in Riverside, served primarily in Northern California. He switched churches every week, fitting into each new congregation where he was needed, which often meant participating in VBS in some way.

“I’m a very flexible person but it’s for sure been more and more tested throughout my summer mission,” Bradshaw said. “Each church does VBS different, even if they use the same curriculum. I had to adjust my mindset and do my best to provide the church with whatever they were asking of me.”

Bradshaw was housed every week by a new family at the church where he served. The summer missions program gave him the opportunity to learn the valuable lessons of not just flexibility, but fluidity and trust as well.

“My favorite part has been getting to share the Word of God with different types of people. Getting exposure to different cultures within California and seeing what each one deals with has been enlightening,” Bradshaw said.

“God has been teaching me how to be still and listen,” he added. “I live a busy, on-the-go life most of the year and this summer that has been tested. In the moments of nothing I have been taking the time to recuperate and see what God is teaching me and what He wants me to share with others.”

Marissa Hernandez, a sophomore psychology major at Fresno Pacific University and a member of Annadale Baptist Church in Sanger, served in and around Fresno with the Convention’s migrant ministry Feeding Those Who Feed Us.

“I loved getting everything ready and knowing that it’s done,” Hernandez said. “Serving the migrants in our community is such a blessing.

“I think the biggest thing I have learned is that we need to be grateful for everything. We all come from different backgrounds and it is important to be available and willing to serve and love people.”

Keanna Yang, a Fresno State alumna and member of Hmong Baptist Church in Fresno, served for a second summer. Last year she was a VBS assistant at a different church each week. This year she served at Dove Christian Ministries’ VBS in Oxnard for a week.

“I love to travel, so traveling around the state and seeing the different needs and being able to connect with the people and help fulfill their needs is amazing,” Yang said.

Each summer she learned something from the Lord that fundamentally changed her heart, she noted.

“Last summer was about transformation. I had to do a lot of surrendering; Romans 12:2 spoke out to me — being transformed and renewing my mind was definitely the lesson of the summer,” Yang said. “This year, God has been revealing that I am a new creation now. He has been guiding me in His path and calling on my life.”

Missions are an important part of the Christian faith, and the summer missionaries followed that commission with their whole hearts and actions. They lovingly shared Christ with those who had never encountered Him, and were the hands and feet of Jesus wherever they went.

Kim believes wholeheartedly in the cause of missions at home, and encouraging young people and adults to serve through missions in their own community.

“International missions are amazing, but we cannot ignore our own backyard,” Kim said. “It is important that we do missions in our own neighborhoods and students are the perfect people to do that. They do not usually have the resources or time commitment needed to do international missions, but they can all impact their own communities for Christ in some way.”

To learn more about CSBC’s summer missions opportunities or find out how to get involved contact Kim at skim@csbc.com or 559-256-0833.