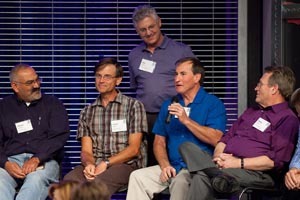 LAKE FOREST – Summer Evangelism Team members came back to see friends from days gone by and to reconnect with the leader who brought them together. It was a bittersweet experience of seeing old friends – just not the one who made it possible.

About 60 of the 371 who served on California Southern Baptist Convention teams from the 1970s to the ’90s attended a reunion at Saddleback Church in Lake Forest June 6-7, but Harry Williams, retired director of evangelism for CSBC and chief architect of the teams and the reunion, died May 28, just days before the event.

Even though his funeral service was in Fresno June 3, a memorial service preceded the opening session of the SET reunion, giving former team members a time to remember and memorialize Williams.

Rick Warren, Saddleback pastor who was a member of the first SET, told those attending the reunion, “Harry was so proud of you and wanted to, in some way, rekindle that fire for evangelism that burned when we were younger.”

Warren quipped, “Harry is the only person I know to have made a list and sent out invitations to his funeral.”

During the service, Warren said, “Outside my own father, no one had more influence on my life than Harry Williams. He also was my father.”

Looking at Williams’ son, Steve, pastor of NorthPointe Church in Fresno, Warren said, “Thank you for sharing your dad with me. Because of him I was able to lead 120 revivals before I was 20 years old.”

Others also shared including Dan Nelson, pastor of First Baptist Church in Camarillo, who served on a team in 1974. He noted, “God used Harry Williams to open doors for me” to coordinate similar teams for the Northwest Baptist Convention.

Debra Fercho Fulenwider of Colfax Baptist Church in Colfax said she found her SET packet from 1974 that had a note in it from Williams, saying they weren’t “evangelizing enough” and reminding the girls to “wear their dresses.” She said, “I’m wearing a dress today in honor of Harry.”

On her page in a “memory book” given to each participant, Fulenwider, who served in 1975 and 1976, wrote, “In my two years on a team I grew a lot, as a person, and in my spiritual walk. I studied my Bible like never before, and saw God answer prayer, use me to win others to Christ or guide them into a deeper relationship with Him … . I learned flexibility while working with others. I gained confidence to teach and lead others in my church. I developed friendships that lasted for years. I met my husband” (Karl, who served on a 1975 team).

At least five couples attending the reunion either met their spouse while serving on a SET or served with their spouse on a team.

Mike Miller, pastor of Boulder Creek Community Church in Boulder Creek who served on a team in 1974, wrote in the SET memory book, “I consider my time on the Summer Evangelism Team to be foundational to my ministry.”

At the reunion he said he appreciated Williams because “he gave us a shot to do something no one else would let us do. He also gave us boundaries and taught us doctrine when some of us couldn’t even spell doctrine.”

Monty McWhorter, Williams’ associate in the late 1980s and early ’90s who was one of the trainers for the teams, read from the training manual that stated the teams were to “make a spiritual impact on the churches you are serving.”

McWhorter encouraged team members to be strong in evangelism for their entire ministry. “We are to remember that the gospel is the power of God for salvation. We are to share that message. Never be a stagnant reservoir of truth, but rather a surging river of trust.”

Wayne Stockstill, pastor of First Baptist Church in Hesperia and a team trainer, said, “If ever I had a true friend in the ministry it was Harry Williams. We knew if evangelism was at the forefront, the church would be healthy. We need to get back to the centrality of the cross … and realize that you’ll never be a pulpit evangelist until you are a personal evangelist.”

During the two-day reunion, SET members shared lessons learned from their service as well as what they have done personally and professionally in the intervening years.

Becky Tillman Hixson, who was from Green Hills Baptist Church in La Habra, was fellowship leader on a 1973 team with her brother, Stan, who led music, and Dennis Hall, the preacher.

Hixson, who now lives in Battle Ground, WA, said most of the evangelism team members were students at California Baptist College (now University), which had a student body of about 600.

“Most of us knew each other,” Hixson said. “I have some great memories from those years, so I was ready to reunite with a lot of them since I don’t live in California anymore.”

She noted it was the first time in almost 38 years she had seen her team leader, Dennis Hall. “I didn’t recognize him until he introduced himself. I just wanted to run on stage and hug him!” Hixson exclaimed.

Hall said he became a team member because of Stan Tillman, his roommate at Howard Payne College (now University) in Brownwood, TX.

Hall, now a pastor in Texas, said he attended the reunion “primarily to reconnect with special friends I made over 35 years ago and to see Harry Williams, because serving on the team was one of the most impacting forces that shaped my life.”

Danny Brady, a locksmith now living in Flagstaff, AZ, said Williams “heard about me and put me on a team.”

Although each team was very different, Brady noted, they “gave me the opportunity to minister the way I love to minister and that is through music.”

From 1971 until 1993, nearly 400 young men and women represented nearly 70 high schools, colleges, universities and seminaries. Team members were from 15 states and conducted about 2,100 meetings including revivals, Vacation Bible Schools, camps and other evangelistic activities. During those 22 years, teams recorded more than 8,000 professions of faith.

A SET facebook fan page can be found by searching for CSBC Summer Evangelism Teams.

There also is a SET facebook group for those who served on a team; search for CSBC group SET 1971-93.