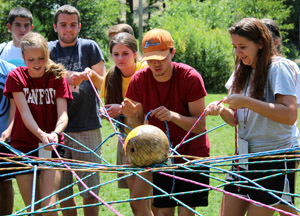 Jenness Park Christian Camp’s staff saw a number of lives changed by the power of God during their busy summer schedule.

CentriKid
The LifeWay Christian Resources-sponsored CentriKid week at JP hosted 209 campers in June. The theme was “Out of this World: Where God is Always with Us!” with Revelation 21:3 as the theme verse. Seminars and chapel times focused on the various roles of God the Father, the Son and the Holy Spirit and how each person of the Trinity impacts the life of a believer. Fourteen children made professions of faith in Christ during CentriKid.

The children’s camp theme was, “Under Construction,” with a goal to help children realize that believers are the Lord’s workmanship, and even young people can be involved in the activities and plans God has for them.

Youth camp, with the theme, “Against the Tide,” featured speaker DT (Dale) Torres from First Baptist Church in Patterson. He noted, “At youth camp this year our goal was to encourage the young people to stand against the tide of the world, the flesh and the devil. We watched as the Lord worked in the youth by giving them an understanding of who He is and showing them whether or not they are standing firm or being swept away.

“Our prayer is that the young people, as they return to their regular lives, wisely build their house on the Solid Rock,” Torres said.

Continuing with the tide theme, co-speaker Joel Gardner, also from First Baptist, Patterson, challenged students by asking, “To what are you anchored? You’re either anchored to Christ who can’t be shaken or to the world that is falling apart.”

He reminded students that if their faith is in Christ, “We have this hope as an anchor for the soul, firm and secure.”

According to Nathaniel Bland, a college student from Sierra Baptist Church in Pioneer, the weekend was an opportunity for growth and renewal.

“I enjoyed the time in God’s Word during the college retreat, and then I was able to teach a breakout session at the youth retreat for guys, where I was able to see God working by convicting young men in their daily relationships with others.”

A highlight for 13-year-old Kaitlynn Ramos from Orangeburg Avenue Baptist Church in Modesto was participating in a skit called “Christ is Right.” She said, “Skits are a humorous way to answer questions that people have about Jesus and the Bible.”

Brianna Bundy from First Southern Baptist Church in Ceres commented, “During one breakout session I learned that during prayer I can talk to God like He’s my friend, someone who really wants to listen to me. I also learned from our chapel lesson that when the devil puts words in my head, I can step back and let God take the situation into His hands. We learned to believe in God, resist the devil, and he will flee from you (James 4:7).”

Centrifuge
For four weeks during July, Jenness Park hosted LifeWay’s Centrifuge Camps. More than 1,300 students in grades 7-12 and their adult leaders participated, under the theme, “The Big Picture.” Daily topics included “God with us from the beginning,” “God with us on Earth,” “God with us at all times” and “God with us to lead us.”

Centrifuge speaker Darrin Hill from Livermore, said, “My prayer for this summer was that the students would gain a much bigger understanding of God and develop a clearer picture of how all the Bible works together to point us to the cross of Christ. I want them to go home after encountering God here, not only knowing Him but loving Him more.

“Hopefully, the students and adults, when they get a glimpse of God’s glory and holiness, become fascinated by God, focused on Jesus and desirous of following the Holy Spirit’s leading in their daily lives.”

Jared Horton, a 14-year-old from Pathway Church in Redlands said, “I’d never thought about Jesus and the Holy Spirit both being present with God at creation. This fact gives me a new view of Jesus and the Trinity.”

An illustration that made an impact on 12-year-old Aryanna Pinon from Sierra Baptist Church in Visalia was writing her sins on a temporary tombstone to represent being dead to sin. She reflected, “I felt so much closer to God when I realized that when I confess my sins to Him, I can say ‘goodbye’ to that part of my life and become a new person.”

During Centrifuge 44 students made professions of faith, while countless others made commitments of rededication or decisions to serve the Lord in ministry.

Barry Lloyd, recently elected director of Jenness Park, reflected on the summer impact: “I am humbled to be part of the way God touches lives here at Jenness Park.

“This past spring I met a man who lives in Santa Cruz. When I introduced myself and told him where I worked, he responded that he had committed his life to full-time Christian ministry while at a retreat at Jenness Park several years ago. He is currently finishing his studies and beginning the application process to be a youth pastor.

“I trust that the Lord will grow His purpose in the lives of the 157 people who have committed their hearts to the Lord so far in 2013,” Lloyd said.