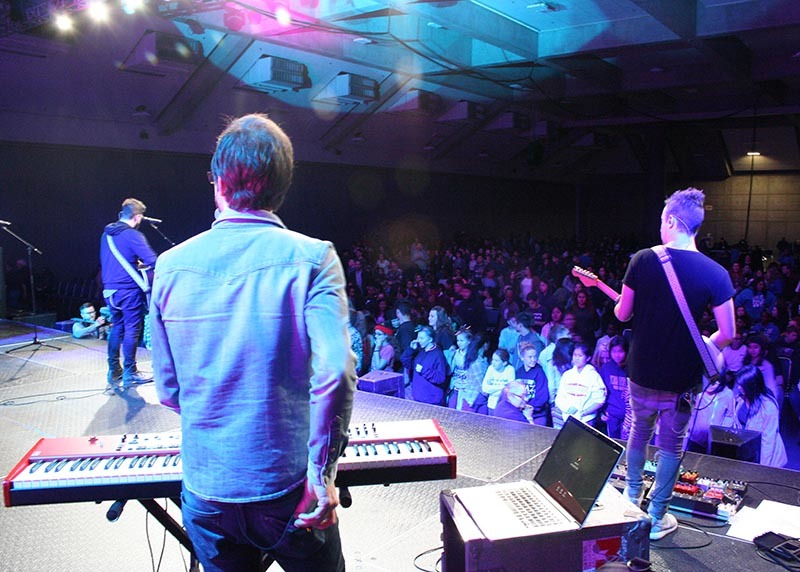 Students get Focused at Sacramento Ignition

SACRAMENTO — Hundreds of California Southern Baptist students are now FOCUSED on what it means to be a follower of Christ.

This year’s Ignition Student Conference featured the study of an entire book of the Bible rather than a single verse — Colossians was addressed by speakers including Russ Chambers and Ed Newton, along with a one-session overview of the entire book by Rick Melick.

Pointing to a group of students during a break, Howard Jin, an adult sponsor with New Life Church in Fremont, said, “This is the hope (of the future).

“We bring the kids to Ignition because it helps them to see that there are others of the faith in the world.”

A motivation echoed by Ivan Gallegos, who brought just one student all the way from the Long Beach area.

“These kids need to understand they’re not alone,” the youth director from Iglesia Emanuel in Lakewood said. “They need to see that there are a bunch of Christians out there.”

“It’s not just them on their own representing Christ,” Jin added, noting he was happy to see the mix of junior and senior- highers from his church “bonding” during the course of the gathering.

Gallegos said it was his third time to attend Ignition as a leader, though he also participated as a student. He remembered the benefit of “seeing a bunch of other youth from California I could relate to.”

Five-time attendee Lelia Kennedy, an 11th-grader from Mt. Zion Baptist Church in Ontario, said, “I come back because I like the experience of being around fellow believers and hearing of people’s different journeys and testimonies.

“It is interesting to me what and how people have overcome, and different challenges and experiences they have faced.”

For the first time since Ignition conferences were held simultaneously in Northern and Southern California in 2012, attendance topped the 1,500 mark.

Three Californians presented TED Talks throughout the three days — on sin, character and evangelism — including Johnnell Williams, director of youth ministries for Mt. Zion in Ontario; Kevin Miller, a member of Woodward Park Baptist Church in Fresno who has served as emcee at Ignition for three years; and Sherann Kim, California Southern Baptist Convention student evangelism specialist and co-coordinator for Ignition.

Lelia Kennedy said she “enjoyed the different speakers, and also fellowshiping with friends and chaperones, and meeting new people.”

Along with worship led by Travis Ryan and his band — an Ignition staple — Christian groups Hawk Nelson and Citizens & Saints presented concerts. For an Ignition first, DJ Promote mixed music before the sessions and for those who stayed afterward for late night events.

“I love the music and the overall feel of getting closer to God,” said Alexis Jackson of the Mt. Zion church.

The Dec. 28-30 Ignition, held at the Sacramento Convention Center, resulted in 70 students making professions of faith in Christ, including the grandson of one of the speakers. Nearly 150 students made other commitments to Christ.

Lauren Peck, a junior high student from Trinity Faith Baptist Church in Rodeo, said one of the best parts of Ignition for her was the Firestarter (small group) sessions. She noted she enjoyed “learning how to teach people about God’s love” and also about “the history of where Jesus was.” Another of her favorites was the Hawk Nelson concert Monday night.

Among many Firestarter topics was “Apologetics: Defending the Faith,” “Same-Sex Attraction: Blurred Lines” and “How to Follow Jesus in a World That Doesn’t;” adult leader topics included “Help! I’m a Student Leader!” and “Burnout — Dealing with It.”

Dozens willing to brave the early morning gathered at 7:30 for an AM Devotional, led by Dave MacNeill of LifeWay Christian Resources in Nashville, with worship by Darren Grubel, CSBC media production specialist, and Audrey Ang, a student from Immanuel Community Church in Fresno.

An offering of nearly $3,450 was collected throughout the three days, and the funds will be given to Grace Network, a local ministry that helps prevent human trafficking.

During Late Night, following the two evening sessions, students had the opportunity to play with oversize inflatable and interactive games.

Eighteen students from California Baptist University in Riverside made up the “CBU Crew” this year, a group that helps provide behind-the-scenes assistance.

For more information about CSBC student ministry or Ignition, visit www.csbc.com or www.studentignition.com, or call 559-229-9533, ext. 261.