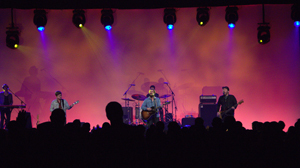 Students “fan the flame” of their commitment to Christ

FRESNO – During Christmas break 2013 hundreds of teens learned what real belief in Jesus is and how to allow God to use the “ugly” in their lives, at the annual Ignition Student Conference.

With that knowledge students were given a choice to make a commitment to either continue living the way they were or to commit their lives to Jesus Christ.

“In just two days, we saw more than 400 students give their lives to Jesus either for the first time or as a rededication!” said Daryl Watts, student and family ministry specialist for California Southern Baptist Convention, which hosts the conference.

Ignition, split into two locations – Santa Clara and San Diego, with the same theme, “Fan Into Flame” – was held simultaneously Dec. 27-28, with the featured speakers and bands dividing their time between both venues.

Ivan Vergara, 12, was one of the 400 who responded to the invitation to make Jesus Lord of his life during the two-day conference.

“I wanted to be saved,” said Vergara, who attended with his youth group from First Southern Baptist Church in Anaheim. “This is my first time going and I wanted to give my life to Christ.”

Five of the 17 students who attended with Vergara from First Southern, Anaheim made decisions for Christ.

“(Ignition) is always a big factor in students making a decision,” said Josh Sanchez, youth pastor of the Anaheim congregation, who has brought students for several years. “The students’ worldview is changed.”

Speakers for 2013 included Chris Simning of Obscure Ministries in Arizona, and Clayton King, campus pastor for Liberty University and founder of Crossroads Worldwide in North Carolina. Travis Ryan and his band led worship in Santa Clara while Dex Alexander, a former member of the band “All Together Separate,” led worship in San Diego.

King encouraged the students to think about what belief in Jesus really means.

“Can you believe in something and not love it?” he asked. “You don’t inherit belief. You can know stuff about God, but not ‘know’ God. You can be around Jesus and not recognize who He is.

“Intimate belief alters your life. You give Him total control.”

King challenged the students to show their belief and ignite something new this year in their relationship with God.

Simning, who has cerebral palsy and was confined to a wheelchair for five years, challenged attendees to not treat their Christian walk like a fast food drive-thru, and to look at the scribbles in their lives differently.

“Many have subscribed to a junk food religion that is not healthy nor holds any nutritional value for who we were truly created to be,” Simning said. “Sadly, our culture is what has determined Christianity when it needs to be the other way around.

“Life with Jesus Christ has either become watered down or sugar-coated, like slurping on a beverage through a straw. Culture has done well to lie to our face by promoting the embellishment of self, and a drive-thru at a fast food restaurant is a subtle approach to how we have been conditioned to gorge ourselves on a smorgasbord of savory sides with an entitlement of what is owed to us.”

Simning added, “We have been trained to have this mentality of getting what we want when we want it. What do you do when you don’t get what you want?”

He challenged the students to determine if they are just hungry for fast food or “hungry for His abundance? Do you take back the order if it’s not what you want or take it with you?”

“God is not fast,” Simning declared. “He is a process. And when we demand an order from Him, we are not allowing Him to give us His best. Fast food has no nutritional value.”

Simning was diagnosed with cerebral palsy after a teacher noticed he could only scribble while the rest of his classmates were mastering writing in the lines.

“My scribbles are a theme in my life,” he said. “He wants to work in that weakness.”

While Simning was in a wheelchair he started hating his life and what he had.

“My life became a broken mess,” he said. “Now, I believe my life is a gift. He will use whatever you think is ugly for His purpose. My scribbles exist for a purpose. From this day forward how will you write your life?”

After each main session students were given the opportunity to make a spiritual commitment and pray with counselors. They also met with their own groups for Bible study and further discussion.

Comedian and speaker Larry Bubb was emcee for the San Diego conference, while Kevin Miller was emcee in Santa Clara. Christian bands Fireflight and Flame performed at both events.

Prior to the conference in San Diego, students volunteered for various service projects across the city, helping local churches with a variety of ministry efforts.

Throughout the two days of Ignition, students attended various “Firestarter” breakout sessions to deepen their faith and help them grow spiritually. Topics ranged from “Living Life Among the Walking Dead” to “Is God Calling Me to the Ministry?”

In addition, church youth groups had an opportunity to connect with others from their local area.

“Our students were able to get outside their church bubble and meet other teens in the area,” Sanchez said. “They really liked that.”

The students contributed a combined offering of $1,731, to be used for CSBC Disaster Relief efforts.

Daryl Watts encouraged the students to leave Ignition determined to “start something new this year.”

“Find the new thing God is going to do in your life,” he said. “God wants to fan a flame in you.”