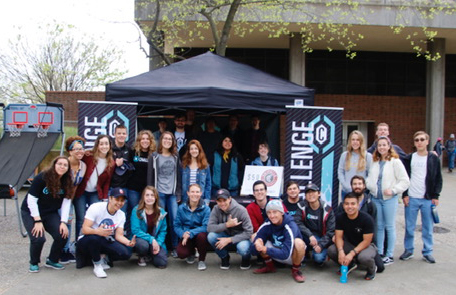 Student ministries are alive and thriving in California

FRESNO — In January LifeWay Research released a report on college students and church attendance that was almost as dismal as the statistics have been for years: basically, a whole lot of students who regularly attended church as high schoolers drop out for at least a year during college.

Statistically speaking, 66 percent of them.

Ben Trueblood, director of student ministry at LifeWay Christian Resources, encouraged churches to have a strategic focus during those traditional college years.

“In many places this is a forgotten, under-

resourced ministry area,” he noted. “Focus is placed on children, students, and then not again until someone enters the ‘young family’ stage. This needs to change.”

Across California, a small but passionate tribe of campus ministers is swimming against the statistical tide. Through their ministries — formerly known as Baptist Collegiate Ministries or Baptist Student Union, now called Christian Challenge — they are on campuses large and small, semester after summer after semester, meeting students; engaging believers, nominal believers and non-believers over coffee and lunch and Bible studies and outreach events; teaching and listening and counseling and encouraging; baptizing and commissioning.

And to be around these campus ministers is to catch a contagious, decidedly positive passion for today’s generation of college students.

On one end of the spectrum are those like Kevin Thorsell, at San Diego State University, who went into campus ministry at his alma mater within a year of graduating. On the other end are those like Neil Walker, who’s been at the University of Southern California for 32 years, and Milt Hughes, 89 years old and still doing campus ministry, now at Cal State, San Marcos.

“Every year I ask the Lord if it’s time for me to move on,” Walker said. “I don’t want to overstay my effectiveness or hinder the ministry. But I also want to stay as long as He leads me here.

“And it seems like every year I get to know the incoming freshman class and tell myself, ‘Okay. I’ll just see this class through their senior year.’ But then another freshman class arrives the next year, and I think the same thing!”

Students’ personal transformation registers as the highlight for campus ministers.

Said Jeff Jimerson, at California State University, Fresno: “I had a guy and a girl who both grew up in church, one in a house church and one in a mega Southern Baptist church. They were your typical church kids — knew all the answers, nice kids, could look good, but had zero actual relationship with the Lord. You couldn’t pay them to read their Bible.

“They were around last year and stayed this year, even when I upped the accountability requirements for my students. Both had personal issues to work through, that the increased accountability forced them to deal with, and to their credit, they both did. They both learned how to share their faith. The girl even started a new Bible study with a nominal believer she met.

“Both of these students just really were spending time in the Word and praying and pursuing relationships that they could help spiritually,” Jimerson said.

“Now, at the end of the year, they’re trained, they have vision, they have experience. They are an example of two who’ve gained a vision and tools for disciple-making.”

At San Diego State, Thorsell shared the story of a student named Brian, with a Buddhist family background. One of the Christian Challenge students, Ruth, was Brian’s co-worker, and she invited him to Challenge. Brian began to spend time with Challenge students, reading the Bible, asking questions, getting involved in meetings and events, and, just before spring break this year, publicly and verbally committed to surrender his life to Christ. A week later, he was on the spring break evangelism trip to Chico State University, where he led another student to Christ.

“Brian said, ‘When I read the Bible, I just feel a joy I’ve never known before,’” Thorsell related. “It is super-exciting to see his passion for the Bible, for growing, for being in community.”

At USC, Nadia from New Jersey took about three months of exploring faith through Christian Challenge, and decided to commit her life to Christ. For Josh, who grew up in church but never thought of faith as something personal, it took four-and-a-half months.

And at Cal State, San Marcos, Hughes and his wife Ruth see dozens of international students come to faith through Challenge, then take that faith back to their home country: Albania, Vietnam, Japan, Germany, France, Pakistan, Hong Kong.

“It is the greatest reward to see students come to Christ,” Hughes exulted. “We are very careful to point out the cost of following Jesus. We are not hard-sell. We’re interested in Jesus’ commission to make disciples, not converts. It’s rewarding, the students who stay in touch long after they’ve returned home, and even send current international students our way!”

Christian Challenge looks different from one campus to another. Sometimes it’s one or two Bible study groups. Often it’s a corporate weekly meeting, with small groups throughout the week. In San Marcos it’s a Friday night dinner, Bible study, discussion and recreation at the Hughes’ home.

Everywhere, campus ministry focuses on relationships. College students, in particular, have little patience these days with anything else.

“I think what continues to baffle, surprise and delight students is when they get around folks who know and love Jesus and then love others,” Walker said. “And they say to themselves, with a touch of wonder, ‘Wait a minute. I heard Christians were against everything, and it looks like that’s not true.’

“When they get into a community that is authentically trying to love like Jesus loved, it takes them aback — but in a good way. It’s fun to watch them discover that.”

There are unique challenges and unique rewards with the current generation of college students, these campus ministers say. The ubiquitous nature of pornography, the mixed bag of social media, a cultural emphasis on pluralism, and the continued erosion, over the decades, of standards of morality and truth in the culture at large — all make for particular challenges today.

mer-oriented,” Jimerson said. “They are highly influenced by social media — though that can be an advantage sometimes as well. Pornography is also a huge challenge.”

“Students live in a culture that is really dysfunctional,” Walker added. “In the past, students could know they weren’t doing well, even if they came from a dysfunctional background, because there were, all around them, people living more or less right and normal. But now the cultural norms are so messed up, there’s not a good benchmark. And so even when students are doing well, it’s based on faulty cultural standards.”

Further, he said, “They live in a culture that loves to label and categorize, and once you’ve been put in a category, you’re stuck there. If you don’t agree with everything someone says, you’re immediately labeled as a chauvinist, racist, misogynist, homophobe or other category. It’s a culture that would rather label and dismiss than engage and understand. That’s really hard for students — as in fact it is for adults!”

On the other hand, there are rewards distinct to the current age. Across the board, campus ministers are grateful for the almost blank slate so many students bring to matters of faith when they walk onto campus.

“It’s like a new start,” Walker explained. “They’re not caught up with a lot of things you have to deconstruct. That can be nice.”

It’s especially true in California, compared to other parts of the country, Jimerson noted. He previously did campus ministry in Oklahoma and Arizona.

“There are fewer expectations and influences here, which makes students more open to new ideas and thoughts,” Jimerson explained.

He added that the current generation of students, while they may take longer to make a commitment, will commit fully once they take the plunge to follow Jesus earnestly.

“They won’t make a decision lightly or out of obligation,” he said, “but once they see the value and catch the vision, they’re wholehearted.”

And what is it that might help reverse that opening statistic? California Baptist campus ministers have some ideas.

Walker suggested that student leaders and parents encourage them to include their faith as a primary consideration in choosing where to attend college.

“Ask high schoolers, ‘Where would you plug in to a faith community at this school or that school? What will the atmosphere be like for your faith at a given school? What opportunities for ministry might you have there?’

“You don’t want the benefits of a degree or job opportunities at the expense of knowing and walking with Jesus.”

Thorsell and Walker both encourage churches and parents to point their exiting seniors toward Christian Challenge, and even set up prior meetings between their student and a campus ministry.

“We are super-glad to meet with parents and students before the students arrive,” Walker said. “That way there’s a personal point of contact before that freshman even moves to campus.”

Churches near colleges play an integral role as well: as a place for students to minister, and be ministered to.

Churches are needed to financially support campus ministers as well — in California they’re responsible for raising most, and often all, their own salary. The ministries themselves need funding: for meeting space (on-campus sites are usually off limits because of stringent administration policies), supplies, events, student training and retreats.

Campus ministers also invite local churches to participate in evangelism, outreach and discipleship events: help staff a table at a campus organizational fair, host students in their homes, invite international students at holidays and breaks, ask students to serve in the church nursery, on the worship team, on the tech team, with summer youth camps.

“I tell our students, ‘College is a unique time in your life,’” Walker noted. “‘You can get training, learn to walk with God, learn to do one thing well in a local church, invest in people and help others do the same.’

“I had a former student who called me up and said, ‘Neil, I walked into this church plant in Ventura, and within two months I’m the discipleship guru! How did that happen?’”

But the most strategic need, Walker insisted, is for the prayers of churches. “There are things God will do if we pray, that won’t happen otherwise. We need prayer, above all.”