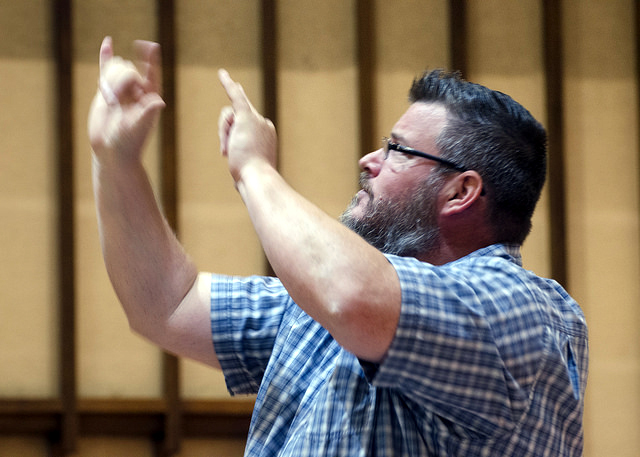 BOWIE, Md. (BP) — When Amberle Brown was a child, she wanted to be a martyr for Jesus, or at the least, a missionary to an unreached people group. She never imagined she would one day become part of one.

“I became a nurse as a way to gain access to closed countries,” Brown recounted at the second annual Special Needs Conference this past spring, sponsored by the Baptist Convention of Maryland/Delaware (BCM/D).

“I spent summers in other countries trying to discern where God was calling me, and I even refused to date boys who didn’t also feel called to be missionaries.”

But a few weeks after her 21st birthday, Brown said she was admitted to a burn ICU for toxic epidermal necrolysis syndrome (TENS), an extremely rare and severe autoimmune reaction that affects one in 2.5 million people and kills one in every three people who have it.

“As my flesh melted away, I also felt that my dreams of being a missionary, too, in a remote part of the world also melted away,” Brown said. “The lining of my eyes, the eyes that I thought I would use to see many unreached peoples come to know Christ, essentially melted off.”

She eventually left the hospital, mostly blind, though “with a deeper pain, a pain of not understanding why God would give me this dream, and what I felt was a calling, to be a missionary, and then take away what I felt was my ability to fulfill that dream as I had always envisioned it.”

She found herself following Plan B, empowering others in her stead to take health and hope across the globe.

Yet, “I still had a gnawing lack of understanding of why God had ripped my lifelong, seemingly honorable dream out of my white-knuckled hands, but God, being God, knew the answer to that question far better than I did,” she said.

At a conference, Brown began to realize the spiritual needs of those with disabilities around the globe.

The thought gripped her heart.

Brown realized that after all her preparation to become a missionary, the only thing she couldn’t do was make herself a member of an unreached people group.

“No amount of praying or studying could make me Afghan or Burmese, but it seemed that God had done exactly that. That moment was life changing for me,” she said.

“It redirected my passions and energies towards becoming a part of the movement of Christians,” she noted, “who are reaching out to people with disabilities who God wants to know Him and be in relationship with Him.”

Brown’s realization echoed a growing sentiment at the Special Needs Conference, held May 6 at Cresthill Baptist Church in Bowie, Md.: “The disabled community has much to teach us about Christ and our need to depend on Him.”

More than 120 people from 27 churches, including five non-Southern Baptist churches, became more and more convinced of this reality as they listened to testimonies and tips from those who were among or work among the special needs community.

All the speakers seemed to agree on one thing: “Churches without a disability ministry are disabled themselves.”

According to the U.S. Census Bureau, nearly one in five people in the U.S. has a disability. The Lausanne Committee for World Evangelization, in their paper, “A New Vision, a New Heart, a Renewed Call,” calls people with disabilities the “hidden and forgotten people.”

“If we were to place these 600 to 650 million people together, they would comprise the world’s third largest nation with the highest rates of homelessness, joblessness, divorce, abuse, and suicide,” wrote Joni Eareckson Tada, former senior associate on disability concerns for the Lausanne Committee for World Evangelization. She is also the founder and CEO of Joni and Friends International Disability Center.

“Only 5 to 10 percent of the world’s disabled are effectively reached with the Gospel, making the disability community one of the largest unreached — some say under-reached — hidden people groups in the world,” she said.

Brown urged her listeners to ask themselves, “Do our churches reflect these numbers? And if not, where are these people, and why aren’t our churches reaching them?”

Hinton and the worship team from Gospel Community Church in Owensboro, Ky., shared about their efforts to plant their church two years ago with the primary purpose of reaching what he calls the fourth largest unreached people group, the deaf community.

There are more than 35 million deaf people on the planet, said Hinton, pastor of preaching and vision. “And every day,” he noted, “750 deaf people die without hearing the Gospel.”

Explaining that music is accessible to the deaf when it is felt, Hinton shared how drums and speakers are “front and center at his church” because “we understand the people who are in front of us.”

These efforts have dramatically affected the teens who go to their church, said Browning, whose son Trent, 17, has Down Syndrome, autism and is non-verbal. The church’s teens now regularly include fellow teens with special needs in activities throughout the community, well beyond the local church.

In explaining the theology of disability, BCM/D State Director of Missions Michael Crawford noted that disability was a direct result of humankind’s fall from grace.

He admitted God had been doing a work in his heart. The day he realized he was not reaching those with special needs, his life changed.

Those questions set him on a completely different ministry trajectory, one that caused him not to see results in the form of church attendance and number of baptisms, but in the ways he and his church members respond to the hurts and struggles around them.

In direct result of this new call, Freedom Church, where he serves as senior pastor, has begun The Banquet Network, a community of churches striving to inspire, equip, and resource the church to reach, serve and include people with disabilities.