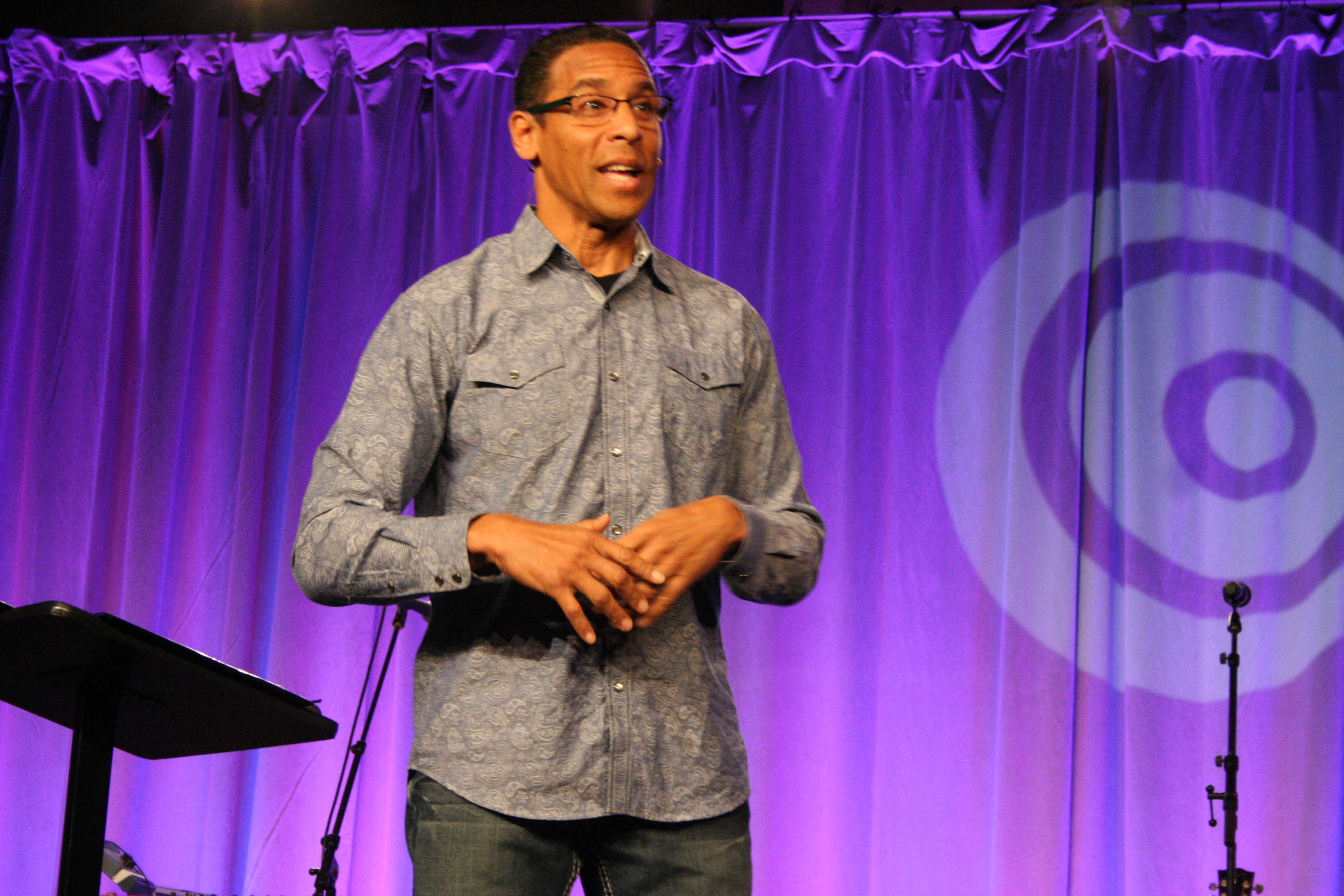 TORRANCE – God is at work in the world but His people must be obedient to “Seek & Save,” according to speakers at the 2014 On Target Evangelism Conference.

Paul Borden
Paul Borden, author and director of Kingdom networks for Growing
Healthy Churches in San Ramon, reminded participants that, though much
is wrong in the world and the church, “God is still at work.”

Borden said the church is growing in many places, but in the United
States it is not – adding the encouragement that God “is still offering
hope” through congregational transformation.

Urging church leaders to be obedient to God’s Word and quit focusing on
believers, Borden said rather the focus should be on the lost.

He presented three “assumptions” to motivate the church:

1 That which is healthy, grows and reproduces.

2. Jesus Christ did not create the church for Christians, but to mobilize the church to reach the lost.

3 The Gospel of Jesus Christ never changes, but the church must be constantly changing.

Miles McPherson
Miles McPherson, senior pastor of The Rock Church in San Diego, agreed,
saying God had put churches in critical-condition cities – “You have a
whole lot of pain in your community. More than you know.”

While churches are in communities where “sickness” is, McPherson noted
four things church members can do in their ministry, beginning with
“count.”

Numbers matter, he said, citing a statistic that numbers are mentioned an average of twice in each chapter of the Bible.

McPherson referred to the biblical story of the 10 lepers Jesus healed, though only one returned to thank Him.

“How many lepers are in your community? How many homeless? How many prostitutes? You have them … people in pain.”

That’s who you’re there for, McPherson declared.

Churches should also “walk,” he said, noting that prayer is important,
but if you “step your foot inside (a ministry site) … whole different
ballgame.” Personal connections matter.

“Ask” is the third important component, McPherson said, including asking local officials about ministries needed in the area.

“Go to the top of the social mountain” to make connections with the community, he encouraged.

Asking “How can I pray for you?” is an easy way for church members to
connect with others. “Every single person in your church can do that.
Tomorrow,” McPherson stated.

His final encouragement of “love” includes being obedient to God. “To love God is to obey God,” McPherson asserted. “If I love you that means I’m committed to helping you obey God.

“God says, ‘There are people dying out here and I want you to go get
’em.’ God also says, ‘You have an incredible opportunity to multiply
your ministry impact beyond what you can ask or imagine.'”

But it’s not going to happen from sermons, McPherson warned pastors – it happens “when you release your people.”

Steve Gaines
Steve Gaines, pastor of Bellevue Baptist Church in Memphis, learned how
to release his church members to ministry after a difficult first two
years with the congregation.

“God started readjusting me,” Gaines said, and a church ministry to local teachers began to change the congregation.

He cited several ways Bellevue has served Memphis, including prison and
street ministry, working at schools painting and landscaping, and a
variety of other services.

The church is not a country club or fraternity, he added. “We’re a
hospital for sick people; and a school to train untrained people. We’re
not just a place of ministry, we’re a base of ministry from which you
deploy” to serve others.

“Wed ministry to sharing the gospel,” Gaines encouraged. “Find a need, meet it; find a hurt, heal it.”

He urged the audience to intentionally, proactively invest in relationships with people who don’t know Jesus.

“God loves them as much as He loves you!” Gaines declared, adding, “Share Jesus like it matters.”

Bellevue’s goal is to be a spiritual catalyst to Memphis and beyond, Gaines said.

“What are you going to do with your life? I’ll tell you want I’m going
to do – I’m going to love a city like Memphis and from there we’re going
to reach the world.”

David Nasser
David Nasser, national author, speaker and consultant, also reminded
participants that God is at work in the world, presenting some of the
ministries his inner-city church-start in Alabama has undertaken.

The native of Iran, who immigrated to the US with his family when he
was a boy, also shared his personal testimony of how God drew him – an
angry, rebellious high school student – into a local church after he was
“pursued” by a Christian school-mate.

“Love is a magnet,” he said, adding that “every church has David Nassers within walking distance” to whom members can minister.

“The grace of God manifested through a local church, doing the very thing it exists for: mission,” Nasser stated.

“You don’t even need a passport to do foreign missions – they’re coming to you!”

Referring to Jesus’ miracle of feeding the 5,000, Nasser reminded the
audience that He didn’t just feed the ones who tithed or were good
church members, but everyone who was there.

Nasser affirmed that people’s needs can seem overwhelming and the reality of ministry is “messy.”

“We don’t have what it takes – but we know the one Who is the
multiplier. So we bring everything to Him and say, ‘We don’t have it,
but Jesus, You do,'” Nasser said.

“I know it’s simple, but at the end of the day, it comes down to the way Jesus modeled it.”

When we reach people, everything’s worth it, Nasser added. “Jesus finds hungry people and meets momentary needs so He can speak into their life eternal truth.”

Travis Ryan and his band led worship during each On Target session.

Next year’s conference will return to the four-location “One Night-One
Reason” format of 2013.