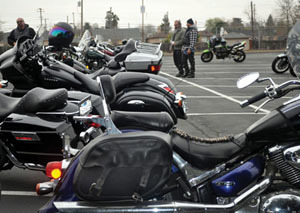 FRESNO – Pastors credit the senior adults, the mature Christians, in their congregations for keeping a strong emphasis on giving to missions through the Cooperative Program.

However, each of the three pastors in this story say they too believe in the way Southern Baptists support state conventions, seminary education and global missions by giving through the Cooperative Program.

“As a church of fewer than 100 gathering for Sunday morning worship, we couldn’t sponsor fully even one missionary, but through the Cooperative Program we can help support 5,000 overseas missionaries,” said Rolland Slade, pastor of Meridian Southern Baptist Church in El Cajon.

“You have a lot of so-called ‘Christian’ giving opportunities in the world,” said Brandon Willette, pastor of First Baptist Church in Galt. “One of the things I explain is that with the Cooperative Program … they’re being good stewards because they can be confident they know where it’s going.”

Mark Standridge, pastor of Placer Heights Baptist Church in Placerville, said he reinforces the “very strong roots to giving and to California Southern Baptist Convention” the congregation knows about both from personal experience and from the “Mission Moments” the church has regularly during Sunday morning worship.

“I share with them the work being done in Disaster Relief, hands-on stuff with migrant missions, and we also are in touch with missions work with two of our collegiate ministers,” Standridge said. Church members “know firsthand what they’re supporting with their giving.”

Each of the three congregations is actively involved in ministering in its community, at the same time it supports the expansion of God’s Kingdom globally through the Cooperative Program.

“When I came to Meridian 10 years ago, the greatest asset we had was our facility,” Slade said. “It’s four buildings, fully paid for.”

By putting that asset to work, the pastor said, the church now has three congregations that minister to different people groups in the community. Slade, whose ancestors were born in Africa, is the American pastor. Binh Phan, a refugee from Vietnam, is the Asian pastor. Maram Shahatit, who was born in Jordan, is the Arabic pastor.

“El Cajon has the largest population of Iraqi and Arabic-speaking people in all the United States,” Slade said. His congregation has roots in Jordan, Lebanon, Iraq, Egypt and Saudi Arabia.

The Arabic church started two years ago, with about 40 people participating in Sunday morning worship; some 20 people attend the Vietnamese church; and 85 meet as part of the American congregation, which worships in a traditional/contemporary context.

“It takes coordination,” Slade said. “We have a big calendar on the wall, and we know who’s doing what, when. We meet quarterly for a joint church council.”

Each Friday evening is a fish-fry at the church specifically for senior adults, led by a couple who own an assisted living center, Van and Addie Hankins.

About 200 people meet annually at the church for a Grandparents Raising Grandchildren support group, hosted jointly by Meridian and the county’s Human Services Department. The midday event includes lunch, a video meeting and respite care of youngsters so grandparents can have time to themselves.

Other things the church of fewer than 100 does: FAITH evangelism through Sunday school, one semester a year for 10 years; a five-days-a-week Alcoholics Anonymous support group; a grand-parenting group, “Incredible Families,” a support program with Vista Hill Foundation each Monday; Prayer Warriors meet each Tuesday morning to pray for requests made on Sunday; Wednesday evening starts with “the best homemade meal in East County,” according to Slade, followed by children’s and adult choir, youth, Arabic and American Bible studies; and an annual community-wide block party to kick off Placer Heights’ week-long Vacation Bible School for all ages.

“In the main sanctuary, we have 14 national flags, the birth nations of all the people who come to the church; plus Brazil, where we have a mission,” Slade said. “Our mission statement is that we live to honor God by sharing and teaching the knowledge of God to all people as we go. Our bottom line: we’re really just practicing what’s going to happen when we get to Heaven.”

Meridian, started in 1957, gives 17 percent of its undesignated offerings to missions; 10 percent goes to the Cooperative Program; 5 percent to San Diego Southern Baptist Association; and 2 percent to local missions endeavors such as twice-monthly food distribution and the East County Pregnancy Care Clinic.

“We give 10 percent through the Cooperative Program as a model for our congregation,” Slade said. “Our tithe goes to CP, but we don’t stop there. … In our new member orientation, we explain our giving as an example of our biblical worldview. Bottom line: we can do more together, cooperatively, than any of us could do by ourselves.”

“Our church is very mature in the Lord,” said Brandon Willette, pastor since January 2013 of First Baptist Church in Galt, which was started in 1952. “They understand the need for giving. Many know about Golden Gate” Baptist Theological Seminary, where he is taking online courses “one at a time so I don’t alienate my family.”

Willette also works full-time at the church and as an aerospace design engineer, a career he’s had for 16 years.

“We’ve been deep in the Word, in Hebrews,” the pastor continued, including the congregation of about 55 in his statement. “Hebrews gets us focused on our faith and our future legacy; that affects what we’re doing with what we have.”

First Baptist shares its building each Friday evening with a group that studies the Bible in Spanish.

“It’s good to let them use our facility, and minister to Spanish-speakers in a way we cannot,” Willette said.

Once a month, the church distributes food after giving a devotion. “It’s been going on for quite some time – years,” he explained. “It’s something the people of Galt count on as a staple. It’s a good, simple ministry” that’s expanding now into coffee beforehand and “building relationships.”

New this year: The Blessing of the Bikes.

“We had little tents they rode into,” Willette said. “We prayed for how they ride, and to keep them safe. We did that about 100 times on February 15.

“No charge, of course,” he added. “I think people are surprised we’ll pray for free.”

The Blessing of the Bikes was an outgrowth of Willette’s participation in the Auburn chapter of Ironhorse Ministries, where he was a chaplain for three years; his brother was chapter president.

“When we went to Galt, we took what we learned and used it in Galt,” Willette said.

The church’s newest ministry is about prayer.

“We’re about to head on a little adventure,” he confided. “We’re praying for revival in our hearts, my wife and I. Well, we started praying for this in mid-March.”

“My wife and I are praying a month ahead,” Willette said. “After the church prays for the community, we’re going to start with mis-sional evangelism. We’d be living like missionaries do, when every day matters. If every person were to lead someone to the Lord, we would double in size.

“The Lord sprang this on me,” Willette said. “That’s what He said, and I’m going with it. … In our church, loving Jesus is the number one thing. We love Jesus through ministries, through loving each other, and how we love the Word.”

“A couple of years ago we had to sit down and look at our church budget, and we had to make adjustments,” said Mark Standridge, pastor for the last four years of the church where about 80 people participate in Sunday morning worship. “Everyone knew we didn’t want to change our missions giving.

“The Cooperative Program is one way for a church like ours to be involved in missions in our backyard, our state and around the world,” Standridge continued. “For us, it helps us be a part of something bigger than ourselves. It’s fulfilling the Great Commission. It’s working with others. It is allowing us to do and give in ways we couldn’t do if we were just doing it ourselves.”

While the pastor says “we’re still trying to make inroads into our community,” the church is on-task. “Close to our church are a number of apartment complexes that are subsidized or low-income,” Standridge said. “We continue to look for ways to minister there. Recently we visited the managers at one complex, and saw a bunch of bicycles chained up that needed repair.”

The manager was willing to give the bikes to the church just to get the unsightly mess removed. Placer Heights members hope to repair and repaint them, and give them away this summer at three or four block parties and other summer outreach events.

In June, for the fourth year in a row, First Baptist Church in Blackshear, GA will be onsite to help with the block parties designed to help build interest in Vacation Bible School that will be held in July, assisted by Carrolton (GA) Baptist Association.

Throughout the year, Placer Heights provides a hot meal for about 50 homeless people on an as-needed basis with other local churches; they did so twice in April.

“We host a meal; the youth do projects in the community; we collect socks for migrant missions in the summer, which we also do,” Standridge said. “It’s an outreach for the men.”

The church also raised $5,000 to send the youth this summer to Mission Lab in New Orleans. “This has always been a church of very giving folks,” the pastor said. “They have very strong ties, very strong roots in giving to missions and to the California Southern Baptist Convention.”

But Standridge doesn’t let the congrega-tion’s history – one member, for example, is a former pastor who started two California churches in the 1950s – direct its giving habits.

“We’re constantly having ‘Missions Moments’ in our church, constantly making these things a matter of prayer,” Standridge said. “It’s just letting them know.”

(Read more information and resources about the Cooperative Program)