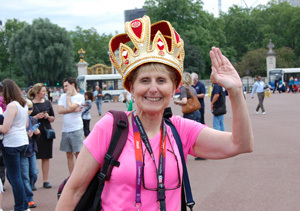 Sharing the gospel at the London Olympics

LONDON – Olympic ministry needs Olympic-size prayers, and California missionary Debbie Wohler said she felt them keenly throughout her 10 days in London this year.

“It was the most God-directed I have felt in a long time, and it’s continued even since I got home,” said the Lake Tahoe-based, California Southern Baptist Convention resort and special events missionary. “I had so many great conversations with so many people, and a lot of them were obviously God-orchestrated. I brought home a Ziploc bag full of e-mail addresses of people who want to stay in touch.”

To Wohler, that bag represents relationships, which she said are the key to people becoming believers in Christ.

“All of my years, what I’ve been successful at is building relationships, and getting conversations to the ‘God question,'” Wohler explained. “I never see Jesus forcing anybody.

He’s the kind of guy five-thousand people follow up a mountainside without thinking about lunch. He’s that kind of attractive.”

And, according to one Coca-Cola employee Wohler talked with, Jesus had nice hair.

“For several minutes I sat with this woman and her friend, and they were pretty much bashing all the Christians they’d seen standing on corners and passing out tracts, and finally I said,

‘You know, I’m a Christian too, even though I don’t do that.’ This woman was a little surprised, then told me she used to be a Christian, until she started reading the Old Testament and ‘didn’t like all the war stuff.’ I asked her, ‘What do you think about Jesus?’ She thought about it a minute, and finally said, ‘He had really great hair.’ I just had to laugh. And we had more conversations, because they saw I wasn’t offended.”

Wohler had conversations with athletes, their families, spectators, Olympic officials and service workers. “I cannot express how many great conversations I had with people about their lives. I cried with people, they cried with me. Every day you talk to people from 25 or 30 different countries.”

In fact, Wohler often used the generally-accepted phrase “the Olympic spirit” as a catalyst for Jesus-focused conversation. “I’d tell people, ‘You know, this is a little taste of Heaven. In Heaven all the peoples of the world will come together, not to compete, but to worship Jesus. He’ll be the star, His own parade of nations.’

“I had a poet from Russia, who was really, really cynical about the Olympics altogether, tell me I’d restored the Olympic spirit for him.”

Wohler met one man whose nephew had just won a silver medal. While they were talking, she said to him, “This is not just about this day, but all the days you took him to practice and paid money you didn’t have and sacrificed 15 years.”

She added: “This man was crying. And I tell you, I had this conversation five times while there.”

Another conversation she had repeatedly included the story of the prodigal son. “People would say to me, ‘You don’t know what I’ve done. God would never take me, or take me back.’ And I would always encourage them with the story of the prodigal son, and assure them that when that son returned it was to a party, and the Father gave no lecture. I must have told 20 people that.”

Even though Wohler felt her conversations and meetings were God-directed, she maintained that, in her view, Europe is one of the most spiritually dead places in the world.

“It’s just apathy,” she explained. “It’s not even hostility. One of the first things people always ask in these settings is, ‘What do you do?’ And I always say, up front, ‘I’m a missionary. I’m here to tell people about Jesus.’ Then I wait for the response. In London, I might as well have said I worked at Dairy Queen, for all the interest that generated. Torino and Athens were similar. Honestly, Beijing was the most spiritually alive Olympics I’ve been to, by far.”

Her theory was partly confirmed by two worship services she attended: one at famous Westminster Abbey, open to the public but attended by only 60 people the Sunday she was there; the other, a Hillsong service (non-denominational), attended by about 2,000 people.
“They had four services that day and there were at least 8,000 people total on that Sunday worshiping Jesus,” Wohler noted.

She said she felt the prayers of believers not only in her conversations, but also in the context of her own safety: one evening she unintentionally found herself in a decidedly unsafe environment at 1:30 a.m., waiting on a bus that was a good 20 minutes away. A man who’d disembarked with her walked in the opposite direction toward his home for several minutes, and then came back to her, saying he didn’t know why, but he just could not leave her there by herself.

“I told him it was God who was telling him that!” Wohler said. “He wasn’t buying it, but nonetheless, this ‘smoking angel,’ as I called him, to his face, because he was smoking a cigarette but looking after me – this guy walks with me several minutes, in the opposite direction of his house, gets me a taxi, and pays for the taxi to take me home. It was amazing. That was definitely the prayers of God’s people taking care of me, because it was a really scary situation.”

The Sochi Olympics 2014? Rio 2016? Wohler has already been invited by members of the organizing committee, whom she met in London, to the Brazil summer Olympics in four years. While the details remain to be seen, one thing’s for sure: this missionary will go where God directs her, just as she demonstrated in one conversation after another in London this summer.