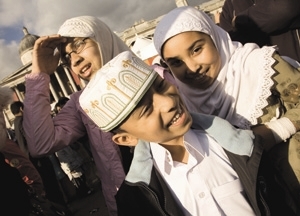 FREMONT – Among Jason Williams’ friends are Imams of San Francisco Bay Area mosques – not something the native South Carolinian cooked up while other kids were dreaming of being firemen.

Even before the Afghan diaspora, the San Francisco Bay Area had drawn a motley gathering of cultures. Now add to this array of people 60,000 Afghans who’d fled there from Russian-occupied Kabul in the 1970s.

If you’ve read or seen “The Kite Runner,” it paints an unforgettable picture of their history. Beautiful Kabul fell to Russia, Afghanistan’s elite secretly fled their homeland and the Taliban took over.

Shortly after, it wasn’t uncommon to see the academics and military leaders of the old Afghanistan working the minimum-wage jobs of San Francisco.

This is the city Williams* entered in his 20s, and he’s never left.

Once graduated from Golden Gate Baptist Theological Seminary in Mill Valley, Williams made San Francisco his home and the Afghans his people.

“When I fly to Afghanistan, it’s like going home,” said Williams, who makes regular trips to the country, often staying with family of his San Francisco Afghan friends.

Williams said Afghanistan is in the American conscious as a poppy-producing land of Muslim extremists. Not to mention, in some circles, a misallocation of American military and money. But to people like Williams, it is a beautiful land with amazing people who need to hear a different story, the true story, about God and His Son. Though most of Williams’ Afghan friends haven’t turned to Christ, they’ve experienced Christ’s love through Williams.

“It’s my hope that Afghans would just fall in love with Jesus. I think that when we make disciples that church is going to happen,” Williams said. “It may be outside of our box, our paradigm, our culture and our traditions. I think sometimes we put God in our box. We say we serve a great God, but we’re really serving ourselves. When we step outside of that comfort zone, I think God’s greatness is seen and great things happen.

“But it requires faith and it requires maybe not having answers but having a calling that you can’t get away from.”

Week after week, month after month, year after year, Williams has shown Christ to a culture whose Islam is their identity. He’s eaten in their homes, and they’ve eaten in his. He’s facilitated Southern Baptist mission teams to provide acts of kindness to help build relationships with his neighbors. It’s a slow process that takes time and patience, but Williams’ ultimate goal is to plant a church for Afghans in the Bay Area.

(*name changed for security. Pray for missionaries like Jason who serve among Muslims, that they would have opportunities to share the gospel. Pray also that God would reveal Himself and that Muslims would meet the true, living Messiah, Jesus Christ.)