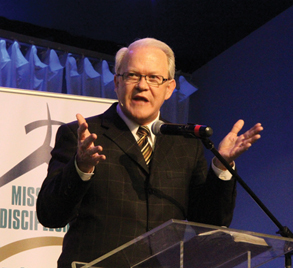 FRESNO – California Southern Baptists were asked if they’re “Ready to go?” during a March 7-8 gathering in Fresno.

The first-of-its-kind California Sent Conference, held at Woodward Park Baptist Church, drew participants from throughout the Golden State for workshops, hands-on training and a keynote address from the president and chief executive officer of the Southern Baptist Convention Executive Committee, Frank Page.

Page also led a seminar on “The Nehemiah Factor: 16 Characteristics of a Missional Leader.”

In addressing the audience of some 200 during the Friday night rally, Page lamented that as he travels throughout the world he senses “an overwhelming lethargy and apathy in the church of Jesus Christ.”

“I’m convinced we need a new attitude,” Page said. “Not just a mental adjustment, but a heart transplant.”

He asked rhetorically, “Is Christ the sustainer of life?” If He were, “I don’t think we’d have ineffective churches.

“Christ oughtta be life to us,” Page declared. “God has a purpose, California Southern Baptists!”

He noted believers also have “a mission,” using the Apostle Paul’s admonition to “run with patience the race that is set before us.”

“The reason God has left us here is that He has a race He has set before us … and I believe it’s better run together.

Montia Setzler, pastor of Magnolia Church in Riverside, presented humorous anecdotes of his experiences through the years on mission trips – though he acknowledged that “they’re serious business.”

Noting Magnolia recently adopted an unengaged, unreached people group in South Asia through an initiative sponsored by the International Mission Board, Setzler told the audience, “Even if you don’t know the language and you don’t know the culture, God can use you … but you have to prepare – your heart, what you’re going to do.”

He said an important part of serving on mission is to “humble yourself,” recounting an experience with pastors while he taught at a seminary in Russia, and their custom of kissing each other upon greeting.

Setzler warned those who plan to serve on mission to “get over yourself” and “allow yourself to be used for God instead of thinking you’re God’s gift to the world.

“When you do that, God’ll use you,” Setzler declared.

“God is always up to something,” he said, “and He wants to use your church and mine to reach the world.

“If you say yes, whether it’s home or abroad, or both/and, it’ll revitalize not only your heart, but your church,” he assured the audience.

Several career missionaries spoke during the rally, including Lorna Bius, North American Mission Board LoveLoud west region coordinator, who said, “Our churches are called to be the touch of Heaven, the touch of love.”

He added that the Great Commission is meant for the church, not just for agencies like the IMB or for missionaries.

Disaster Relief training and some two dozen workshops were offered Friday afternoon and Saturday morning, including topics ranging from evangelism to student ministry, prayer and missions training. Several were presented in Spanish.