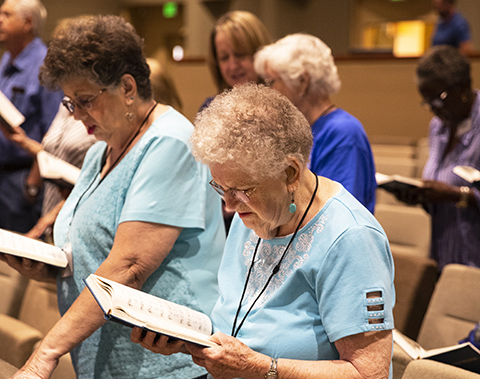 RIVERSIDE — Vacation Bible School is no longer just for children.

Magnolia Church in Riverside hosted a “retro” VBS, themed, “God’s Masterpiece Theatre,” that drew more than 100 members of the church’s senior ministry and other congregations to encourage them to remember their worth in Christ. The VBS ran from June 17-21 from 9 a.m.-noon each day.

Magnolia’s senior ministry, known as the Caleb Community, welcomed anyone 55 years old and better to join in a five-day study focused on Ephesians 2:10, which emphasizes that people are God’s masterpiece and are renewed in Christ.

The experience also helped participants step outside of their normal social groups, which created new friendships.

“Many of the people sit by people they don’t know in church because they don’t have opportunity to interact with them in worship. Many made comments about making new friends,” said Vi Estel, director of senior adult ministry at Magnolia Church.

Each day began with a parade of the United States and Christian flag and their respective salutes, followed by a recitation of the theme and memory verses, then worship music. “Mission Moments” and an update from recently returned volunteers of Magnolia’s various mission projects preceded the day’s message, presented by a different speaker every day, including Jeff Cate, professor of New Testament at California Baptist University, and Fermín Whittaker, California Southern Baptist Convention executive director emeritus.

Attendees spent the second half of each day participating in age-appropriate recreational activities such as chair volleyball, “giant Jenga” and giant tic-tac-toe; mission-themed refreshments such as churros for Mexico missions or scones and tea for missions in the United Kingdom; and crafts that will be donated to various ministries, such as burp-rags for single mothers and decoupage vases for senior care facilities.

The idea for the senior VBS came from Magnolia’s Lead Pastor Montia Setzler after he read about a similar event in another church’s newsletter. The idea was popular, and a planning committee was formed to idealize and organize the event. Sue Moreland, the VBS director, helped lead the committee in monthly meetings and prayer to bring the event to life.

Moreland led a non-profit organization for 22 years and was impressed by the dedication of the senior volunteers.

“Give senior adults a job one time and they take care of it. That’s one of the amazing things about working with senior adults. They are committed to what God has for them 100 percent,” Moreland said.

Each facet of the VBS had its own leader. Vaughn Jones led worship, Norm and Alyce Markley headed recreational activities, and Mary Jo Sagan took charge of crafts.

The inaugural event was a big hit with participants. There were smiles and bright eyes everywhere as people socialized and got involved in activities.

“I’ve taught VBS for 30 to 40 years and it’s nice to get to be a part of one where I do not have to do everything for a change,” one participant said.

Overall, the first-time event was a rousing success. Planning already is underway for next year’s senior Vacation Bible School, which has a tentative them of WOW (Wonder of Wonders). Each day of the study will feature an aspect of the life of Jesus, such as miracles, His crucifixion and His resurrection.

The leadership team for this year’s VBS plans to prepare a manual to serve as a guide for other churches interested in sponsoring a senior VBS. For more information contact Estel at 951-689-5700.