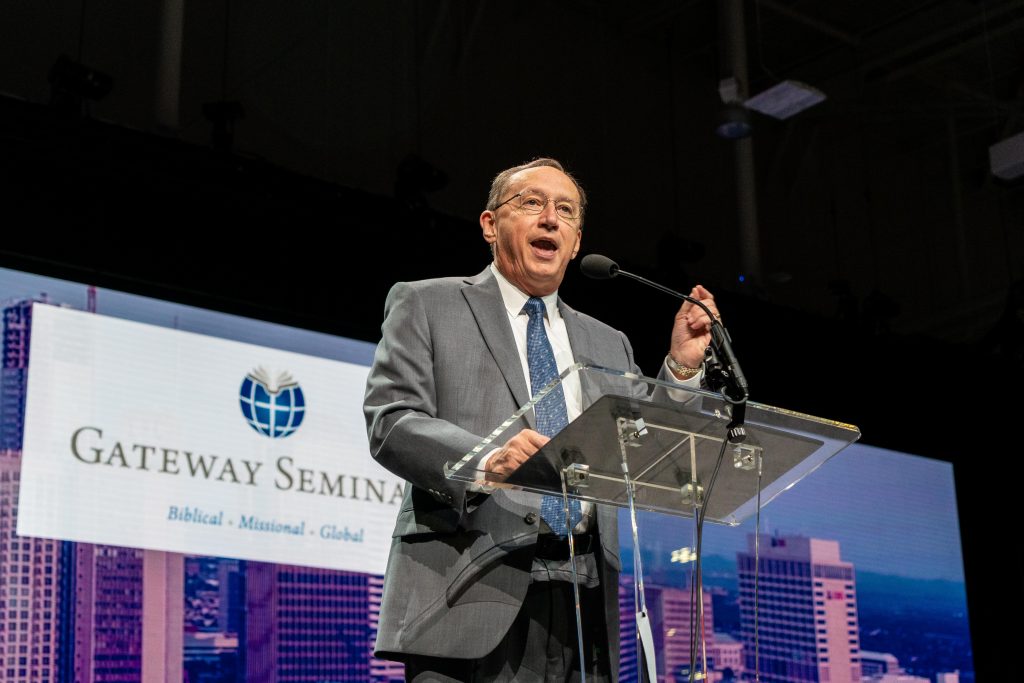 Reporting by Tyler Sanders, Director of Communications, for Gateway Seminary

NASHVILLE—Gateway Seminary’s mission is exemplified in biblical diversity and by a significant graduation milestone, President Jeff Iorg told messengers during his report at the Southern Baptist Convention June 16.

“Gateway is your daily demonstration of the power of the gospel to unify people from a wide-variety of cultural and racial perspectives,” he said.

In speaking to diversity and racial issues, topics in the forefront of Southern Baptist life the past few years, Iorg said during the past semester the Seminary offered master’s level courses in English, Korean and Mandarin, and diploma training at its learning centers in English, Korean, Spanish, Burmese, Cantonese, Chin, Thai, Lao, Karen, Main, Nepalese, French, Haitian-Creole, Hmong, Vietnamese, and Mongolian. He emphasized that Anglo students have comprised fewer than 50 percent of Gateway’s student body for more than 25 years.

“Because of this diversity,” he said, “Gateway has been addressing racial issues and the global problem of racism for decades.”

Referencing a report to Gateway trustees in April 2021, Iorg shared how Gateway faculty address racism, including but not exclusively white/black issues present in America. Iorg said Gateway faculty depend on biblical, theological and missiological tools to train students to confront racism.

Following Iorg’s report, a trustee asked if the seminary could produce a document detailing how faculty address racism in the classroom.

“Our faculty responded to this request with pages of examples of how they address racism and racial issues throughout the curriculum – from biblical studies to theology to church history to counseling to spiritual formation to early childhood development and every discipline in between,” Iorg said. This document is available at gs.edu/curriculum.

Iorg personally shared experiences of he and his wife being members of an historic African-American church, Mt. Zion Baptist Church, in Ontario. He told messengers he was honored to serve as the first Anglo elder of the congregation.

“My relationships with the leaders at Mt. Zion have become a profound source of spiritual strength for me,” he said.

“For the past six years, we have been tithing our income, helping start a second site, going to prayer meetings, and giving to the building program. Ann teaches Sunday School and I preach a few times each year,” he said.

“It has been a life-changing experience to build leadership credibility in a church where we are learning new ways of being the church as white minority members within a majority black culture.”

Iorg asked messengers to share in celebrating Gateway’s 10,000 graduate, Yoon Sagong who earned the master of divinity degree and serves as a pastoral intern alongside a Gateway faculty member in a Southern California church plant.

“Some of you may be surprised [by 10,000 graduates] because you think of Gateway Seminary as your small seminary out west. We are now a leader-producing powerhouse making a global impact,” he said

“We thank you Southern Baptists for standing with us, giving through the Cooperative Program, praying for us and sending us students.”