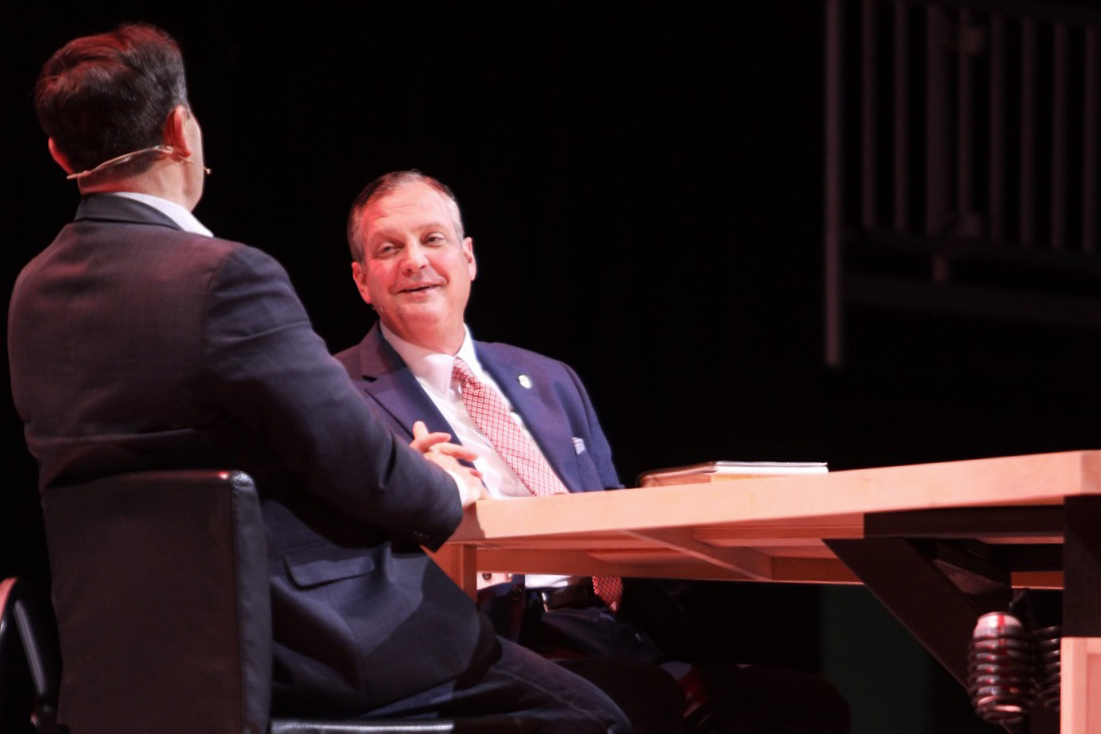 “I became an advocate for [my church] becoming more involved in the Southern Baptist Convention,” Dever explained, “not out of a sense of tribal loyalty — not that that’s bad — but because as a Gospel Christian who wants to see the Gospel taken to the ends of the earth, I think the SBC is a force multiplier.”

The two spoke as part of a gathering for Southern Baptists attending the 2018 Together for the Gospel conference April 11-13 in Louisville, Ky. Mohler, president of Southern Baptist Theological Seminary in Louisville, and Dever, senior pastor of Capitol Hill Baptist Church in Washington, D.C., discussed the state and importance of the SBC.

In their 45-minute back-and-forth, they touched on the nature of denominations, the theological commitments of Southern Baptists, the Cooperative Program and the upcoming SBC annual meeting in Dallas.

Dever explained that he often hears younger Christians complain about denominations because they perceive them as divisive, splitting Christians instead of unifying them. But Mohler suggested that the removal of denominations would bring far more disunity.

He noted the absence of denominations only creates artificial unity. Without denominations, what you’re left with is either theological liberalism, because you’re saying doctrine doesn’t matter, or a state church, because an external authority is determining theology and practice over and against individual churches.

“The existence of denominationalism is not a scandal,” Mohler said. “A scandal is the coercion of conscience and the denial of religious liberty or the watering down of the faith so it wouldn’t matter.”

Still, conferences like Together for the Gospel and the similar Gospel Coalition conferences predicate on pastors and lay Christians celebrating the doctrine they hold in common. And Dever explained that he hears fellow Baptists worry that those who participate in conferences like these are “minimizing doctrinal differences we would have with other people who are participating.” The worry is the diminishment of Baptist identity.

Mohler said he believes the opposite is actually true.

“To the contrary, we are most specific about these issues,” he said. “Because here’s what is interesting: Even in our friendly banter with one another, we’re not avoiding the theological issues…. The point is that the people who show up at this conference show up as the most full-bodied in conviction.

“If this were about trying to subjugate or avoid theology, we would not just have sat through an hour on the immutability of God, filled not only with biblical exposition but confessional citation,” Mohler said, referencing a plenary talk from pastor and professor Kevin DeYoung about the doctrine of God.

In explaining the benefits of the SBC to local church pastors, Dever described his experience of leading his church to increased giving to the Cooperative Program.

“When I came to our church, it was 130 people, mostly elderly,” he recalled. “Our budget was in the red and we were not doing well. I knew that if we began to see anyone called out to serve the Lord in ministry or in ministry overseas, we would need the help of things like the International Mission Board, things like Southern Seminary.

“To do that, you need to step into the convention,” he noted. “I explained to them that if we start seeing people raised up, we can’t pay for them all. But if we will cooperate with these [more than 47,000] other churches, together they’ll [help] pay for every missionary we raise up. As long as they’re qualified, this family of churches will take care of them better than any other group of churches I’m aware of in evangelicalism.”

Mohler added that the SBC allows churches to extend their ministries beyond the tenure of current leaders.

“Every denomination is some mix of theology and what can, for better or worse, be called tribalism,” he said. “Tribalism can be very bad. It’s like nationalism: It can be exclusivistic and can be idolatrous.

“But let me tell you how it can be very good,” he added. “One of the great strengths of the Southern Baptist Convention is that there is someone who will care about what you care about if you fall or you die. That’s something really, really important to me.”

Dever and Mohler discussed the importance of participating in the life of the denomination beyond contributing financially, which Mohler called a stewardship responsibility.

“Someone eventually has to decide what kind of person gets sent as a missionary, what kind of theological convictions do we expect of our seminaries, what’s our idea of a healthy church, what kinds of churches should we plant, how do we know when what we’ve planted was a church,” said Mohler, encouraging the Southern Baptists to “show up” in denominational life. “Someone is making those decisions. Guess who they are. They’re the people who are in the room when the decisions are made.”

The significance of the 2018 SBC annual meeting

The two discussed the upcoming annual meeting in Dallas, including the two candidates expected to be nominated for SBC president. Right now, the two presidential nominees are Ken Hemphill, an administrator at North Greenville University and former president of Southwestern Baptist Theological Seminary, and J.D. Greear, pastor of The Summit Church in Durham, N.C.

Dever and Mohler acknowledged that the two men bring a different vision to the presidency and certainly represent different generations of Southern Baptists. But Mohler pointed out the extent to which Southern Baptists should celebrate these two candidates, regardless of who wins the election.

“The good news is that both of these candidates are men of stellar character,” he said. “Both are men who’ve been tested.

Dever and Mohler’s full conversation, including breakdowns of the history and structures of the SBC, will be available at www.t4g.org in the coming weeks.