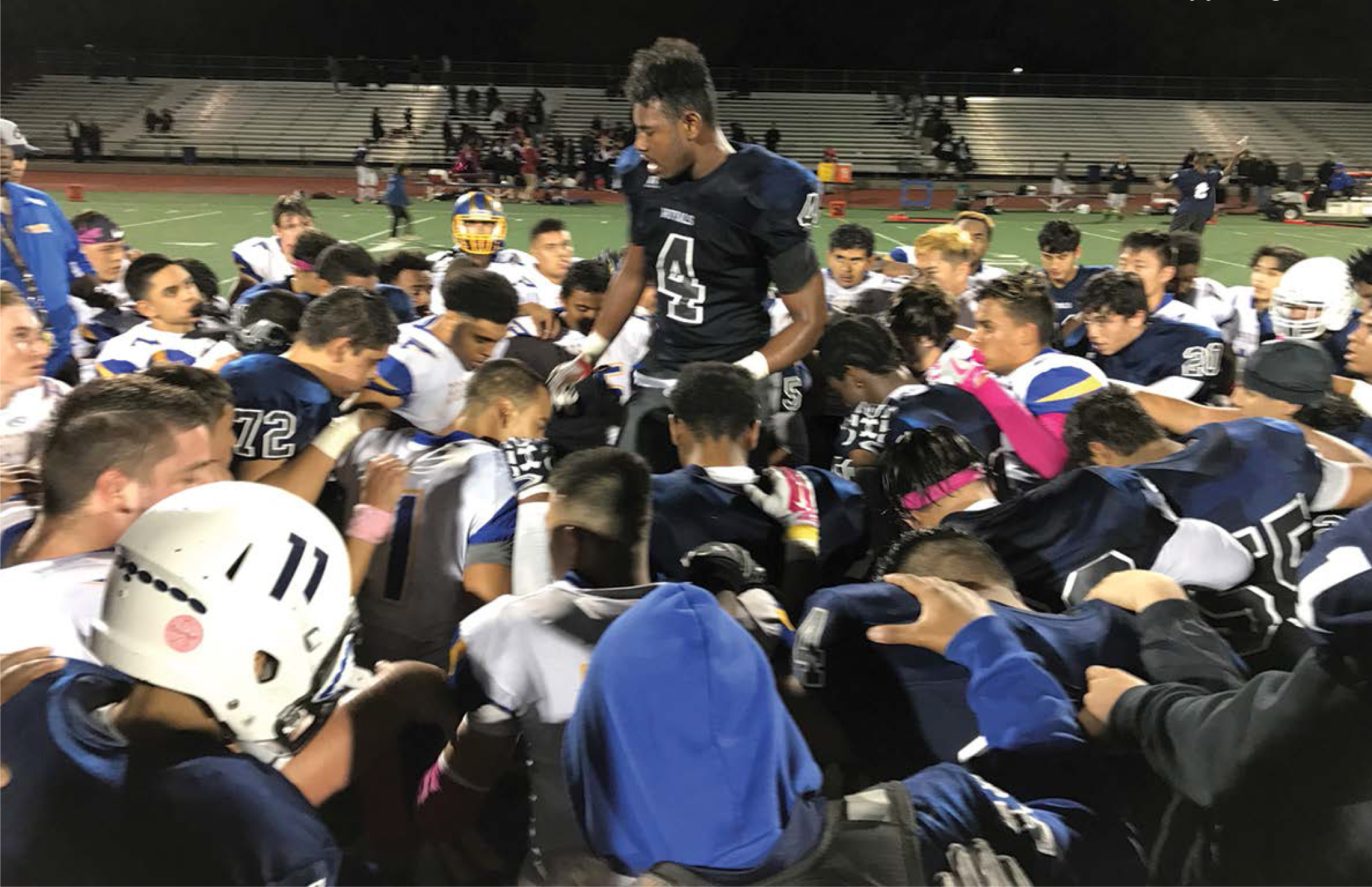 SAN JOSE — A high school football team gathering to pray before a game is not all that uncommon. But inviting the opposing team to join in student-led prayer after the game?

Standard, for the team at WC Overfelt High School in San Jose, where John and Fay Chambers lead the Fellowship of Christian Athletes (FCA) student club.

“We played a team from a private Christian school a couple of years ago, and their athletes did that with ours,” John explained, “and so now we offer it to our opposing team for every football game, home or away. Student athletes take the lead in this, and say the prayer. We have yet to have a team say no to our invitation. It’s very meaningful.”

John speaks matter-of-factly about his ministry to student athletes at this high school of about 1,300 9th through 12th graders, but “meaningful” comes through in his description of it.

The San Jose-area native and his wife, members of Foxworthy Baptist Church in San Jose, have been leading the FCA at Overfelt since 2004, starting small but now averaging between 18 and 20 students at their weekly on-campus meetings. Usually about 15 students make professions of faith in a given sports season (there are three in an academic year) — but in November of last year 26 students prayed to receive Christ.

“The fields are white unto harvest,” explained the retired coach and PE teacher, quoting Jesus’ words about the readiness of people to receive the gospel. “And as long as they are, we’ll be sharing with them.

“Young men and women need the opportunity to know Jesus and learn how to walk with Him. Who would’ve thought, after 19 years leading FCAs while being a classroom teacher, that I would see more students come to Christ since I retired than in so many years in the classroom?”

FCA is a nationwide, non-denominational organization that ministers to coaches and student athletes from junior high to college. The club at Overfelt, like all others, is a recognized student group: it has a constitution, student officers who help administer and sometimes lead the club (they always open and close the meetings), and classroom teacher involvement. Chambers, ordained as a chaplain through Foxworthy, is appreciated and known affectionately throughout campus as “Chaplain John.” While primarily athletes attend, FCA also is open to non-athletes. Since the club was established at Overfelt 12 years ago, another one has been started by students who are not athletes but are involved with FCA.

“It’s really great working with our athletes on the leadership team. There are about 15, and every five weeks the officers get together to help plan the next five weeks of meetings,” Chambers said.

Weekly small group gatherings consist of either a sports-and-faith-related film, a character trait study or a lesson from a classroom teacher who is a Christian. Once during each sports season they hold a luncheon for the athletes of that season. There, a Christian athlete shares his or her testimony, and then Chambers’ pastor, Don Fugate, presents the plan of salvation and offers the athletes an opportunity to receive Christ.

At the beginning of each sports season, Chambers contacts each sport’s coach and requests to honor two of the athletes. When the coaches ask what the criteria is, Chambers tells them it should be based on good character and effort. FCA gives those two athletes a certificate of recognition and a $5 Jamba Juice gift card.

This desire to bless the students found an especially warm welcome with the football coach, who has now invited Chambers to lead a devotion with the team every Monday and to pray with the team before every game.

“It’s great to be able to see these young men and women come to know the Lord,” Chambers said. “These luncheons might be the only opportunity they have to hear the gospel and have a chance to receive Christ Jesus.

“I give them a New Testament and other follow-up material, and I follow up with them myself.”

As a coach and teacher, Chambers had already worked with FCA clubs for nearly 20 years. In 2004, while checking up on some of his former students, he learned that Overfelt was looking for a track coach — and when he accepted that position, he met a student athlete who wanted a Christian club for athletes on campus. That was all the open door Chambers needed.

Though he retired after three more years of coaching he continued to lead the FCA group on campus.

“The Lord is never through with you,” Chambers asserted. “He always has a job for you. We are the Lord’s children, so we continue to do whatever He has for us. I see retirement as simply going from one side of the street to the other.”

And many of the student athletes at WC Overfelt High School are grateful — some of them eternally — that Chambers has that perspective.