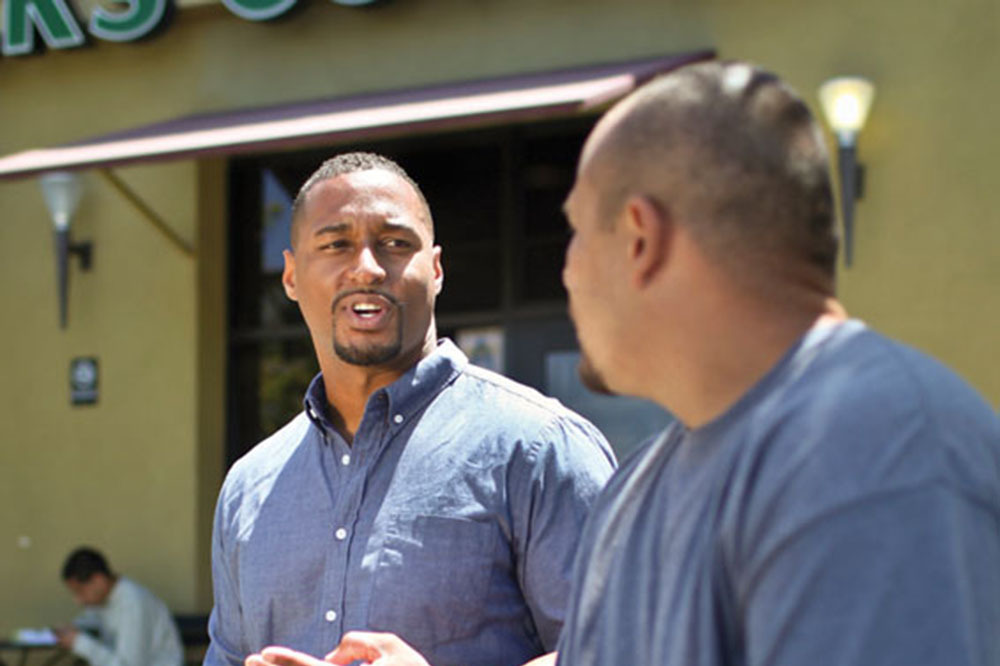 SAN DIEGO – Jason Esparza was walking his dog in San Diego. A stranger asked if he’d ever considered breeding his American Bully. That everyday conversation led to an unexpected reunion for Esparza and to changed lives for him and his fiance.

“Our home was dominated by Panamanian culture,” says Victor Schloss, the son of two Panamanian immigrants. “There was a warmness and an openness to God and the Church. It prepared me to be open to the gospel.”

Openness – to the gospel, to people, to change, to God’s leading – have placed Schloss into what some might call an enviable assignment. The 31-year-old church planter serves San Diego as city coordinator for the North American Mission Board’s “Send North America” emphasis.

At the heart of Schloss’ ministry is a passion to see broken lives reconciled. Witnessing that brokenness in his early career as a sheriff’s deputy convinced Schloss he was unlikely to pass up his sense of call to church planting.

“I gave my life to Christ as a senior in high school,” Schloss said. “Prior to that I was aware of the gospel and who Jesus was, but He was never my Lord. It was never personal before that time.”

Schloss attended Azusa Pacific University on a football scholarship but briefly lost his way, as only freshmen can do. He said the loss of his scholarship left him broken and shattered, but it led him to Bible college. There the thought was planted that God might have a different path for him. “There I sensed a call to ministry for the first time.”

Dependent confidence
After graduation Schloss secured a position with the San Diego County Sheriff’s Department. His strong, confident demeanor was well-suited to his new assignment at the George Bailey Detention Facility where his primary duty was to guard and transport violent sex offenders. Schloss is quick to note that he is not the source of his confidence.

Undaunted by inmates’ propped-up defensive exteriors, Schloss saw through to their pain. He took steps to connect with the men who were willing to drop their facades.

“I was challenged by the brokenness,” Schloss said. “I felt compelled to answer with compassion. Some of my co-workers saw these men only as scum, defined by the charges they faced. I tried to see them as the people Jesus died for.”

Schloss’ professionalism and easy manner opened doors for advancement. The department tagged him for command training. But after two years he could not escape the church planting call.

“I was nervous speaking to my commander about my plans,” Schloss said. “They had invested so much in me, and I was on a leadership trajectory. In the department when you take a promotion guys say, ‘I gotta roll up.’ I told my commander, ‘Sir, I gotta roll up. God is calling me to do this.’ He said, ‘Victor, we all have a chain of command. I understand.’

Confronting doubt
The next move jarred Schloss into doubt about his calling, testing his resolve and perseverance. He accepted an assignment to serve as a church planter-in-residence with a quick timeline to a new launch. But after he arrived, it became apparent that the plan had changed.

The church wanted him to perform an administrative role indefinitely with an eye toward possible future church planting. It was not what he believed he should do. He walked away with no immediate prospects.

“I was blessed to make a lot of connections during that time,” Schloss said. “Mike Carlisle (San Diego Southern Baptist Association director of missions) told me he was convinced God had a place for me. At my lowest point of doubt, God revealed Himself.”

That revelation would lead Schloss to join with 19 others to plant The Body Church in his home in 2011. The confirmations for the move have hardly ceased since the launch. Another recent validation involved two men and a dog.

Brandon Lamb, a member of The Body, saw Jason Esparza walking his dog. Lamb thought the American Bully might be a suitable match to breed with his dog so he struck up a conversation. Lamb turned that conversation to the gospel when Esparza opened up about his personal brokenness. Schloss later met with Esparza and his fianc‚, Inna Brody, who both came to faith in Christ.

“There was something familiar about Jason, but I could not place it until he said, ‘I knew I knew you from somewhere. I remember you talking to me at Bailey,'” Schloss said. Esparza had been one of Schloss’ charges at the Bailey detention center. Schloss baptized Esparza and Brody together.

“Inna is a Russian Jewish immigrant,” Schloss said. “Her family wanted nothing to do with Christianity. I told her, ‘You know your family is not going to speak to you if you do this.’ She is the first person in her family to become a Christian. She told me she could not deny her faith, and she had counted the cost, understanding her family would disown her.”

The Body is matching Schloss’ vision for a church that reaches people far from God. Esparza and Brody are both the first Christians in their families. Schloss calls members like Lamb “Body builders” because they engage their neighbors and introduce people to Christ.

The initial launch group of 19 has reached 120 members with a half-dozen first-time visitors every week. The Body has baptized 45 new members, established small groups, created partnerships in the community and started Saturday night worship to reach more people.

God’s call demands an answer
“If you are called by God to plant a church, do it,” Schloss said. “You need an authentic relationship with Christ – that has to come first at the core of who you are – and then be sure of your call. Don’t worry about anything else. Because when everything else is gone, you can trust your Savior and His call on your life.”

God’s confirmation, and Schloss’ confidence in Him, allowed Schloss to consider and accept an additional role – city coordinator for Send North America: San Diego. The job was beyond his vision.

“God is bigger than my dreams or ideas,” Schloss said. “He loves this city. I learned not to try to come up with the next new idea. God is here, and if you will discern where He is working you can be much more effective. I’ve learned that I need God.”

Schloss said his city coordinator role has also shown him the critical nature of partnerships.

“On my own strength I can’t do what I have been called to do each day,” Schloss explained. “I have to rely on Him. I have moved from a healthy, habitual daily prayer life to a continual, desperate posture of prayer. God is pulling me from the context of the comfort of my routine. Comfort does not produce the dependence on God I desperately need.

(Reprinted with permission from On Mission magazine. To learn more or to subscribe, visit www.namb.net/onmission. View San Diego’s Send North America story at namb.net/video/sna-sandiego. Visit namb.net/SanDiego to discover how you and your church can help reach the city for Christ.)