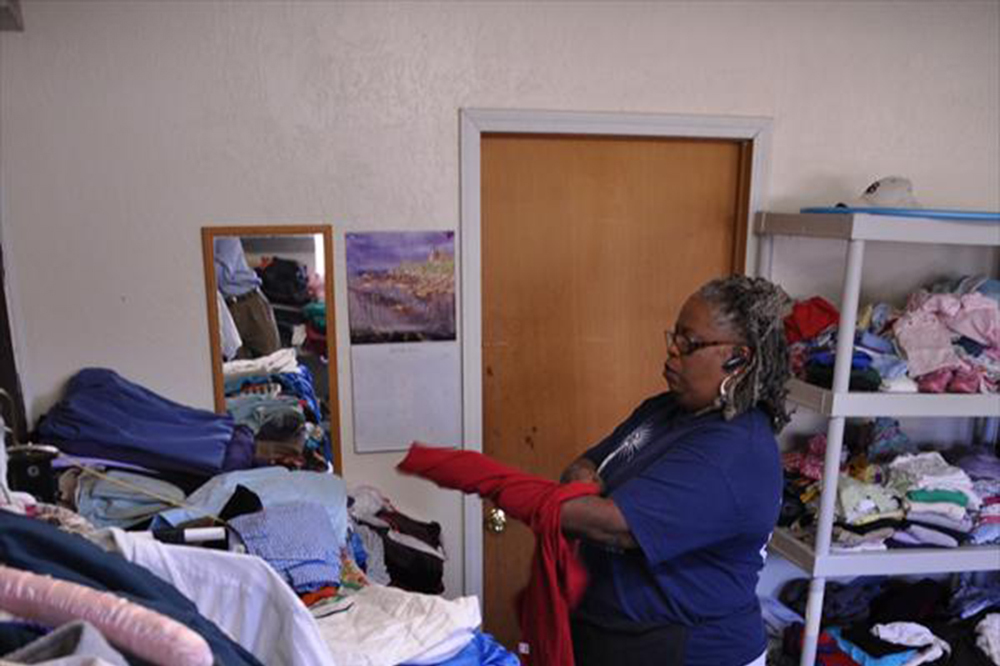 SACRAMENTO – To a certain degree, Sacramento is the stepchild to California’s more glitzy, scenic and trend-setting cities.

Los Angeles has Hollywood, San Francisco the Golden Gate Bridge and cable cars, and Sacramento has…well, its most important claim to fame is that it is the state capitol, a fact that is lost on most Americans when asked trivia questions.

California Southern Baptists view it as another of the state’s heavily unchurched metropolitan areas in need of a gospel witness.

The needs are great, but the resources are greater when people arrive with volunteers and supplies equal to the task.

“The Sacramento Association of Southern Baptist Churches has 98 churches and missions spread across four counties. We have a lot to do,” said Director of Missions Dennis Fredricks. “I tell each church, ‘You have a field of 220,000 people – go for it!'”

That means churches have to have a plan that reaches all residents, not isolated demographic groups. The area is very homogenous so churches need to think in those terms.

Years ago isolated communities of ethnic groups such as Korean, Chinese or Vietnamese were more common and required a tailored outreach. While those groups still exist, it is far more common for the races to blend together and create a homogenous mix.

“We do not have large isolated areas where just one ethnic group lives where you might have a church that caters to that demographic,” Fredricks explained. “We are largely a mosaic of many groups living alongside each other.

“It’s very unfortunate these days for a church to start without having a plan to be representative of its community. Now you begin by hiring a multicultural staff, then growing from there.

“Nearly 93 percent of Sacramento households speak English to one degree or another,” Fredricks continued, “so it’s never correct for a church to say it can’t reach the language groups outside its doors.”

For churches to grow, they have to have an active presence in the community. It’s through those doors – literacy missions, after-school tutoring or Backyard Bible Clubs – that prospects are identified and relationships are built, Fredricks said.

While the school program’s federal funding means the church can’t address faith issues, it serves as a powerful way to bring children and their parents onto the church grounds. And that, Wong says with a smile, is where relationships are built.

As a result, the church continued the tutoring program in the summer when the government funding ended for the school year. The summer “bridge program,” as it is called, registered 60 students – 18 of whom came to faith in Christ. The church used the C.S. Lewis classic “Chronicles of Narnia” as the reading curriculum.

“Because we came to know the children throughout the school year, they were comfortable with coming back to us in the summer. We then get to know them a little better and can be more involved in meeting their needs and those of the family,” Wong explained.

First Baptist Church, Del Paso Heights ministry partners with Hispanic church and is overseen by African-American couple
Across town in unincorporated Del Paso Heights, a struggling Anglo congregation has opened its facility to a ministry that has created a strong presence in the rough neighborhood. It was once prosperous due to the good jobs offered at nearby McClellan Air Force Base – until it closed in 1995.

First Baptist Church, founded in 1945, mirrored much of the base’s growth and started several other congregations during the boom years. But today it finds itself in a highly transitional neighborhood and has bars on all its windows.

Pastor Bob Richardson now oversees a loose-knit outreach through a partnership with an Hispanic church for which it provides space, and to a food and clothing ministry overseen by an African-American couple.

“To be honest, I wondered how an Anglo pastor could make a difference in a community that is largely African-American and Hispanic and marked by gangs such as the Bloods and Crips. But we felt we could provide our facilities to others who have a sense of calling but lack space to meet.”

“Sistah Pat” Rivers as she is known, became the new face of the church when she brought For His Glory to the white cinder-block building. The clothes closet and feeding ministry has been a popular draw for area residents and gets them onto the church grounds.

On a recent Wednesday 30 adults lined up for lunch. They crowded the fellowship hall and kitchen as Rivers and her helpers dished up a hot spaghetti meal.

A woman walks in the door and signs in at the desk, quickly expressing her gratitude for the service.

“I just learned about this and it is so important for me right now,” she says to Rivers who replies with her trademark smile and a big hug. “Thank you so much,” the woman says. “This is so awesome.”

Rivers thanks her for coming and says, “Welcome. We have a lot of fun here serving the Lord.”

It’s that kind of heartfelt thanks that makes the ministry worthwhile even with limited resources, the matriarch of the ministry explained.

“People out of nowhere donate clothes and that’s one of our most popular ministries. It’s a community closet but we call it the Lord’s Closet. He is so good to us.

“Christ said, ‘I was hungry and you fed me, I was naked and you clothed me.’ We try to live as close to His teachings as possible.”

Sacramento Association is a big partner in that outreach, donating the equivalent of 60 bags of groceries each month.

The food ministry provides a time for prayer, presenting the gospel and a devotion during meal times. It’s a good example of social gospel at its finest – believers sharing their faith and meeting needs to bring others to faith in Christ. In fact, Rivers said, it’s exactly what Christ would do if He lived in Del Paso Heights.

She and her husband, Ben, founded the clothing ministry in their home and it eventually outgrew the location.

“The Lord then gave Ben the idea of adding a food ministry and that’s when Pastor Bob offered space in his church five years ago,” Rivers explained.

The outreach has now grown into reconciliation in the community through involvement in the Lifelines of Hope “Ceasefire” ministry. While a citywide effort involving clergy from across denominational lines, the Del Paso Heights community is coordinated through For His Glory.

“Every Friday from 7 p.m. to 9 p.m. as many as 14 volunteers from our and other churches walk the area to build relationships with gang members and leaders. There has been a good reduction in the amount of street violence in South Sacramento since the ministry began but we don’t have any statistics on our area yet. We’ve just been doing this for two years,” Rivers explained.

“I lost a niece and cousin to gang violence just by being innocent bystanders, so I know firsthand how traumatic it can be.”

That’s where volunteers could lend their resources, just like they could at New Hope Church with Daniel Wong.

“We just love to see people come to Christ. If I had some more help in our food and clothing ministry or on our Friday night walks we could have such a greater impact in Del Paso. I would love to see more folks accept Christ,” Rivers said.

“Nobody deserves to go to Hell. I want to help as many people as possible avoid it and have a good life right here on Earth.”