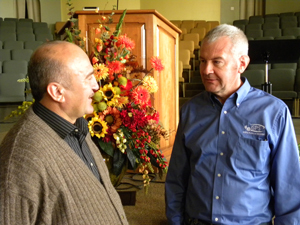 WEST SACRAMENTO – Russian Baptist Church in West Sacramento has 2,050 members, but will likely have 2,500 for their worship services on any given Sunday.

However, most Anglo or non-ethnic Southern Baptist churches, unless they are church plants, will most likely have twice as many members as attendees on Sunday.

In fact, the Southern Baptist Convention boasts 16.1 million members, but recent statistics indicate only about 6 million Southern Baptists can actually be found in weekly worship in their congregations.

There are also more than 4.5 million non-resident Southern Baptist church members. Some on church rolls have no doubt been dead for years. Others have moved and never connected with another Baptist church.

Many could not be found with a search warrant and a pack of bloodhounds. The mysterious disappearance of yet other church members would resemble the operation of law enforcement’s witness protection program.

This alarming non-resident membership statistic has prompted the comment that a “16.1-million-member Southern Baptist Convention is as much of a myth as Bigfoot.”

These observations beg the question, “Why are Russian Baptist church members seemingly more faithful to their churches and presumably also more devoted to Christ?”

Ivan Mileyev, Slavic language church starting strategist for California Southern Baptist Convention, explains that Russian people need time to process their salvation decision and sometimes it takes a year or two before they are ready to make a firm commitment to Christ. He indicated salvation is more than an emotional experience.

Mileyev, who currently is funded by the North American Mission Board and California Baptists, added, “We believe that salvation is more than just praying the sinner’s prayer or repeating the words that a pastor may pray when seeking to lead a soul to salvation. Praying the sinner’s prayer may not include repentance, and if there is no repentance there will likely be no fruit or evidence of real conversion.”

Repentance is a word used frequently in Russian Baptist churches and is almost synonymous with “salvation.” In sharing his own experience Mileyev testified, “At age 16 I realized that there was more to being a Christian than coming from a Christian family, being religious or being involved in church ministry. I repented, accepted Jesus as my Lord, and was baptized.

“But when a person truly repents,” Mileyev continued, “he will be a disciple and be in the church and be committed. If he does not feel sorry for his sins and repent he cannot appreciate what Jesus did for him on the cross, and he cannot be joyful over his salvation and being free from the guilt and shame of sin.

“This real joy comes when you have truly repented and know that your sins are forgiven,” Mileyev stated.

“Russian Christians really have a very simple faith,” he elaborated. “They don’t have very much theological education so … they just believe the Bible.”

Russian Baptist churches, according to Mileyev, not only depend on sound preaching with an emphasis on repentance, but they are committed to much prayer.

“Joe De Leon (retired leader of the CSBC church starting group) came to preach in the Sacramento church and many repented,” Mileyev said. “He was surprised and inquired about the remarkable response and was told, ‘We have prayed very much. We prayed for months prior to the meeting. We prayed during the meeting; and we will continue to pray for God to give us a harvest from this meeting.'”

“We really want our children to be saved; and we are doing everything we can to keep from losing our children” Mileyev declared. “We are spending a lot of time instilling our Christian values into the hearts of our youth. Our students speak English and we must develop worship experiences and ministries to meet the needs of these second- and third-generation Russians who speak English.

“And we have come to realize that our primary responsibility is right here in our Jerusalem and Judea. San Francisco has 100,000 Russian-speaking people, but only one Slavic church.”

“We are in the process of starting churches in San Jose and Monterey as well as in Reno and Las Vegas,” Mileyev noted. “These churches will not be started with a core group from other churches, but we will start them by reaching unbelievers.

“We support mission work overseas, but our first task is to reach people here. No one else can do it better than we can. We know the language, the culture, the background and the mindset of the Russian people,” Mileyev explained.

“Doing mission work overseas may be more adventurous and exotic, but missions begin at home; and God will probably hold me more accountable for reaching my next door neighbor than someone in Kiev, Ukraine. It would be hypocritical to go across the ocean and witness if I don’t do it here.”

Russian Baptist Church in West Sacramento is one of about 40 Slavic Baptist churches in the greater Sacramento area, which has a population of more than 100,000 Russian (Slavic) people.

Several Russian Baptist churches were started in California after WWII when refugees began finding their way to America.

“For some reason Baptists and Pentecostals were persecuted in Russia more than any other religious group except for the Jews,” Mileyev noted.

“The last wave of refugees or emigrants came after perestroika in the late 1980s and early 1990s. Most of them came from Russia and Ukraine, resulting in the establishment of a good number of Russian Baptist churches.”

Pavel Khakimov is senior pastor of the West Sacramento church, but only preaches twice a month. He preaches and administers the Lord’s Supper on the first Sunday and preaches again on the third Sunday. However, the church has multiple services and at least two sermons in each service. By the end of the month as many as 24 men, including pastors and deacons, will have filled the pulpit.

Russian Baptists rarely lack for leadership, because they insist on their men being able to testify and preach soon after their conversion. The congregation has as many as 50-60 men who are called upon to preach in the worship services. When a church needs to be planted a reservoir of gifted men is always available to help with the new church start.

“We must stay focused and be faithful and not be ashamed of the Gospel of Christ,” Mileyev declared. “It does not matter where we live or how popular we are. When we unite in Christ, we can do more and be more effective than we can be separately.”