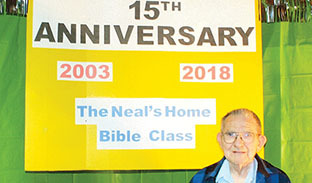 DOWNEY — Harold Neal — 83-year-old retired airplane builder and bivocational pastor, caregiver to his wife of 66 years — has been leading a home Bible study in his garage in Downey for 15 years.

Says Neal, matter-of-factly, “What else could I do that could please the Lord? Teaching is God’s calling. I can’t do anything else. If I can’t teach or preach the Word of God, I think I might as well go on to be with the Lord.”

The Illinois native may speak matter-of-factly, but he, along with others, recognizes that a 15-year home Bible study is significant. Through the years, the class, which has averaged from 8 to 12 in weekly attendance, has studied most of the Bible, and nearly all of the New Testament, verse by verse. Neal produces all the teaching materials himself, from detailed outlines of each passage to large charts, maps and timelines — so some students in the class have literally years’ worth of Bible outlines at their fingertips.

“This class remains because a group of Christians wants to search God’s Word,” explained the pastor-turned-teacher with the booming voice — an asset, he said, when most of your students are senior citizens with hearing issues.

“Some folks have a limited knowledge of scripture, but some are dedicated Bible students. If they keep the detailed outlines, they can go back any time they need to and have basically a commentary on that passage.”

Not all who attend are believers, however. Neal tells of a neighbor who started attending because “he thought one of the ladies in the class was his girlfriend!” The neighbor came for about six months, and in the course of his tenure heard the clear plan of salvation many times.

“I talked to him, but he said he didn’t like my God,” Neal said “I said, ‘Well one day you’ll be standing at the gate and will face Him.’

“Well he didn’t like that, and he stopped coming; but then, a few months later, when my wife had another stroke, he called out to me from across the street and said, ‘I’m praying for Martha!’ I’m not sure where he was spiritually, but about three weeks ago he died. I just pray that he had come to know the Lord Jesus as his Savior first.”

Another participant was a visitor at First Southern Baptist Church in Downey, through whose ministry the Neals began the home study in 2003.

“This man — who was from a Catholic background — had sworn not to go back to church ever again,” Neal said, “but after a couple of weeks his wife talked him into coming to our home study. I encouraged him to ask the church about becoming a member, and he did, and he made a profession of faith, and he got baptized.

“That’s one of the experiences that meant more than anything else, I think.”

About two years after beginning the study, having quickly moved the class from their living room to an adapted space in their garage, Neal and his wife moved their membership and involvement to First Baptist Church in Santa Fe Springs, and stopped offering the class. But within a week, Neal said, they’d gotten calls from every person in the class, who said, “We don’t care where you go to church, we just want to do this class with you!”

“The most exciting part of the week is Thursday morning — getting up, making coffee, cleaning the floor, getting the room ready for our class,” Neal said. “We start with a few minutes of prayer requests, have coffee, sing a song or two, and then I offer a 45-minute lecture that I’ve typed up word-for-word. Of course they can ask questions, but mostly I lecture because that’s what they want.”

Neal said that despite a degree from Liberty University and “Bible courses from one end to the other under my belt,” he couldn’t find curriculum or material that really suited him. So he began drafting his own verse-by-verse outlines. Those, and the selection of topics and scriptures to study, are born primarily out of his personal daily time with God.

“I take care of Martha, of course, since she’s bedridden after eight strokes,” Neal said. “So when she goes to bed each night about 6, I go with her, get to sleep about 7, take care of her during the night every couple or three hours, and then almost every morning the Lord wakes me up around 4, and I spend a good solid three hours alone with the Lord. It’s just wonderful, that time.

“When I was a bivocational pastor I couldn’t study with the Lord like that, but now I can. And the Lord always makes it clear what we’re to do next.”

Which, for the foreseeable future, will include a weekly home Bible class in the home of Harold and Martha Neal.

“I wish everybody could do the same.”