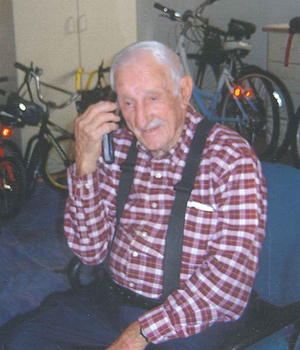 Recipe for a fulfilled life: keep fishing and serving

Fishing is blessed by God, he adds.

The first week of February Bigelow caught a 25-pound white-tail tuna in the ocean waters off San Diego. It was the biggest catch of the day on the boat he was on.

Fishing also is an opportunity to do the work of Jesus, the retired pastor said. He and his wife Ruby, who is three years younger than he, have made a ministry in the ninth decade of their lives of providing fish-fry events at least four times a year in Tijuana, and one or two more times a year in Metro San Diego.

“He catches a lot of fish,” Ruby said of her husband. “How much fish can you eat?

“Someone told him he should have a fish-fry. That was about 12 years ago.”

The Bigelows work together in the fish-fry ministry as they have throughout their 72-year marriage. Bigelow goes out on half-day charters and lets deckhands do a basic cleaning of the yellow-tail tuna, sea bass, rock cod and salmon grouper he catches because “they need to earn a living.” When he gets home, Ruby fine-tunes the cleaning and deboning, cuts the fish into six-inch filets, vacuum-seals and freezes them.

That’s only the first step.

When it’s time for a fish-fry, Ruby takes a sufficient number of filets from the freezer so they can thaw.

“It takes about a day-and-a-half to thaw out because it’s about 25 to 30 pounds of filets,” the retired pastor said.

He makes a marinade of buttermilk, cayenne pepper, garlic salt and paprika; or perhaps lemon juice with salt and pepper; or even just “lemonade,” but not sweet.

“I put the marinade on for less than an hour,” Bigelow said. “That helps it stick to the dry.”

He also makes “the dry,” a combination of Bisquick, cornmeal and a little salt.

But he’s not the only one in the kitchen. Ruby’s task is making two quarts of tartar sauce. Ingredients: diced dill pickles, red and white onions, and capers, mixed with Best Foods mayonnaise.

“Getting it all ready here at home is quite a chore,” Bigelow said. “We were both a little tired today.”

This was on Tuesday after they had spent four days at Centro Shalom in Tijuana, where he preached the Sunday morning message to about 300 parishioners as well as provided a fish-fry for 50 or more staff and volunteers who work at the multi-faceted ministry center.

“Getting everything ready” is step two for the Bigelows. Step three: getting it there. This involves getting everything from the house to their car and driving 20 miles to Chula Vista, where a Centro Shalom van picks them up to ensure there are no border crossing or safety issues.

Remember: these two are in their mid-90s.

Step four is the actual frying of the fish; it’s a time-consuming and sweat-drenching job that involves a two-burner propane stove, two pots with about five inches of oil in each, heated to about 400 degrees, and the coated, breaded fish dropped one at a time into the hot oil. More than one and the filets stick together, Ruby explained. Each fish takes about five minutes to cook through.

“I like to keep the fish hot, so I take down a large cooking pot for that,” Bigelow added.

Centro Shalom workers have learned how to fry the fish, so now for the most part he just supervises, he said, saving his fish-frying prowess for San Diego events.

The Bigelows’ first fish-fry, 12 years ago, was for women living at a recovery center in San Diego. Since then they’ve added the homeless, Set Free Ministries and CRASH ministries, church groups, children’s and senior adult groups, and pastors in San Diego Southern Baptist Association.

“Ruby and I lived through the Great Depression in Oklahoma,” Bigelow explained. “I know what it’s like to be hungry. Fishing is one way I can minister and meet the need of hungry people.”

Because they have gone so often over the last three years to Centro Shalom – the Bigelows have even left their two-burner propane stove there so they don’t have to move it each time from their garage to their car to the Centro Shalom van and back again – they only do a couple of stateside fish-frys a year.

“Centro Shalom is located in a real poverty area,” Bigelow lamented. “The people live in houses made out of cardboard, sometimes plastic, and what lumber they can get, sometimes. They don’t have running water or toilets or electricity, unless they tap into a line.”

He said when he was first taken to Centro Shalom three years ago by friend and former director of missions Dwight Simpson, he was struck by the extreme poverty, by the good work of the center and by the need for volunteers.

Centro Shalom ministers each week to about 500 youngsters in activities designed to let them know of God’s love for them. They also minister to adults in a variety of training programs designed to help them learn a trade to be able to pull their family out of poverty.

“The ignorance of extreme poverty has had a monopoly on the lives of its inhabitants,” according to the website of the ministry started in 1988, www.CentroShalomTijuana.com. “There is an ever-increasing percentage of family disintegration: the parents (fathers particularly) never express words or acts of affection or kindness towards their children (instead they abandon them). The adult males, especially the indigenous people, think that women don’t have fertile minds or intrinsic value and treat them accordingly, like second class citizens: not unlike beasts of burden. The poorest and most vulnerable inhabitants of these breeding grounds are the children.”

When Bigelow saw some children’s bicycles last summer at a Salvation Army thrift store, he decided to buy them, repair and paint them, and give them to children at Christmas.

This harkens back to his pre-Christian days, when he was a professional cross-country bicyclist whose credits include the 100 miles he rode in the Texas Centennial in 1937.

“When he was called to the ministry, he had to give it up because the races were on Sunday,” Ruby recalled. The love for bicycling never left him, though, she added, and he wanted to share it with some youngsters in Alamar (an area in Tijuana where Centro Shalom is located).

The question, though, was, which 10 to 15 – maybe 20 – youngsters would receive one of the bikes? Bigelow kept acquiring more bicycles.

“With some help from our daughters and grandson, we managed to give away 83 bicycles at Christmas,” Ruby said. “It was a big deal. We had a big meal and a big program.

“When we were there this past weekend, we saw them so happy to be riding their bicycles,” she continued. “It makes you happy to make other people happy.”

Earl and Ruby met at church. She was a member of Kentucky Avenue Baptist Church in Oklahoma City. He had moved there from his native Kansas to find work when the nation was recovering from the early 1930s Great Depression and the mid-1930s Dust Bowl.

He wasn’t a Christian, but Ruby’s sister, head of the young people’s department, somehow got Earl’s name as a prospect.

“They knocked on his door and invited him,” Ruby explained. “He thought that was the funniest thing; he came out of curiosity. The next night we were going to an Assembly of God church. During the invitation, some man came down the aisle, tapped him on the shoulder, and asked if he was a Christian.”

Though technically making a profession of faith in Christ at the AOG church, Bigelow was discipled by a pastor, Chester Mason, who suggested he go to Oklahoma Baptist University.

He had dropped out of school to help “keep his family alive” during the Great Depression, Bigelow said; his job was selling newspapers on the street.

“When I was saved and called to the ministry, I knew I needed the best preparation I could get,” he said.

Bigelow passed an entrance exam and was admitted to OBU, where he worked in the printing department for 20 cents an hour to help pay his tuition. While at OBU, he was president of the student body, and taught golf one year.

The couple dated for four years before getting married his senior year.

“I liked the way she did her hair,” Bigelow quipped. They had four daughters, and have added six grandchildren and six great-grandchildren.

Among highlights from their seven decades of ministry together in 15 churches: Bigelow baptized his father, who later was called to bivocational ministry. He drove to his factory job one day and as he got out of the car, he dropped dead from a massive coronary. He was 56. Bigelow today is 50 years older than his father was when he died.

Another highlight: Bigelow baptized Sarah Wright in Norman, OK when she was 100 years old, and preached her funeral when she died four years later.

Bigelow retired as pastor of First Baptist Church in Santee in 1982, and in August 2010 preached what he thought was his final sermon, at the church where he and Ruby currently are members, First Baptist of Pacific Beach in San Diego.

“Bigelow chose to conclude his preaching now, rather than wait for his health to determine his final message,” according to a 2010 article in an OBU alumni magazine. “However, his decision does not preclude anything that the Lord may have for him in the future,” Ruby told the magazine.

Bigelow was given the annual California Baptist Historical Society Heritage Award in 2007.

The sermon he preached (with an interpreter) recently at Centro Shalom took him more than two weeks to prepare, Bigelow said.

“For the most part, he has a fresh sermon every time,” Ruby added. The message was titled, “The Amazing Wonders of Heaven,” with John 14:2-3 and I Corinthians 2:9 as scripture references.

“This was the first time I preached this sermon,” Bigelow explained. “It’s a wonderful message for people who have problems and can look forward to something that is good.”