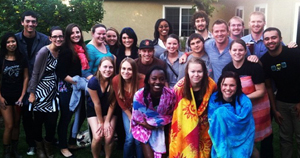 ​”Reaching the World in California” – on college campuses

FRESNO – To reach college students for Christ is to influence the course of business, government, culture, and, yes, the Church for decades to come.

Says veteran college minister Neil Walker: “The college years are very pivotal. It’s when students really make major decisions, when they begin to walk in adult arenas as a believer. And it’s a time when they’re exploring a lot of different things. So to help them develop a relationship with Christ is to see their lives change and be different, for years to come.”

Walker, who will begin his 27th year as a student leader at the University of Southern California this fall, coordinates the work of Southern Baptist campus ministers at 10 campuses across California.

In the 2013-14 school year, these ministers saw 153 students make professions of faith, 350 students involved in Bible study or discipleship small groups and 20 serving in summer or semester missions. Nearly 200 of those were international students.

It’s a vast and chiefly untapped mission field, domestic and international: California has 124 four-year universities, and about 600 career schools and community colleges. One out of every seven college students in the nation is in California – a whopping 3 million-plus students. And, if there were any need to confirm the California Southern Baptist Convention tag-line, “Reaching the World in California”: USC has more international students than any campus in the nation.

Highlights of the school year include such stories as:

In all these stories, the common denominator is personal relationship.

“For as much as people try to come up with different things, what ultimately lasts is developing deep, abiding relationships with students,” Walker explained. “We need methods, we need systems, of course, but students just need somebody to walk along with them, to really be there for them, encourage them. If they don’t have that, they just end up fizzling out.”

To that end, Walker and other campus ministers provide opportunities for prayer and spiritual growth, for ministry and for fun.

“As long as there’s relationship, we see growth,” he explained. “We can’t just gather them together and speak. Howard Hendricks, from Dallas Theological Seminary, said years ago, ‘You impress people from 30 feet, but you impact them up close.’

“You’ve got to walk with students to impact students. And yes, that takes a lot of time.”

In some sense this is harder to arrange these days. Walker said physical access to campus is more limited than it’s ever been: heightened security and firmer rules mean campus ministers don’t have access to many areas where they once just walked in. (At some campuses fingerprint scans are used to access dorms.)

Further, there is, in his words, “push that we have to not only tolerate different agendas, but also celebrate them. We hear now from administration things like, ‘You can’t have anything in your constitution where your officers have to be Christian just because you’re a Christian organization.’

“Well, students often reflect what culture around them says, and they get confused. So we get to help them navigate when they start asking questions,” Walker said.

And those questions – about belief, faith, truth, purpose – are becoming more common these days, which Walker sees as a prime open door for ministry, even as doors on campus are becoming more literally closed.

“One result of all the push of political correctness is that everything has been kind-of put on a level playing field,” he explained. “Everything is open in terms of truth. So that opens the door for some students to feel okay investigating Christianity. Our job is to be there and take the time to address those things.”

When a student responds – with a profession of faith and baptism, or with renewed zeal for discipleship and evangelism – it is “super exciting.”

Says Walker, “And then, to have students in their 30s and 40s who were part of our ministry, now making a difference in their churches and in missions, and in their families … that’s been a huge encouragement.”