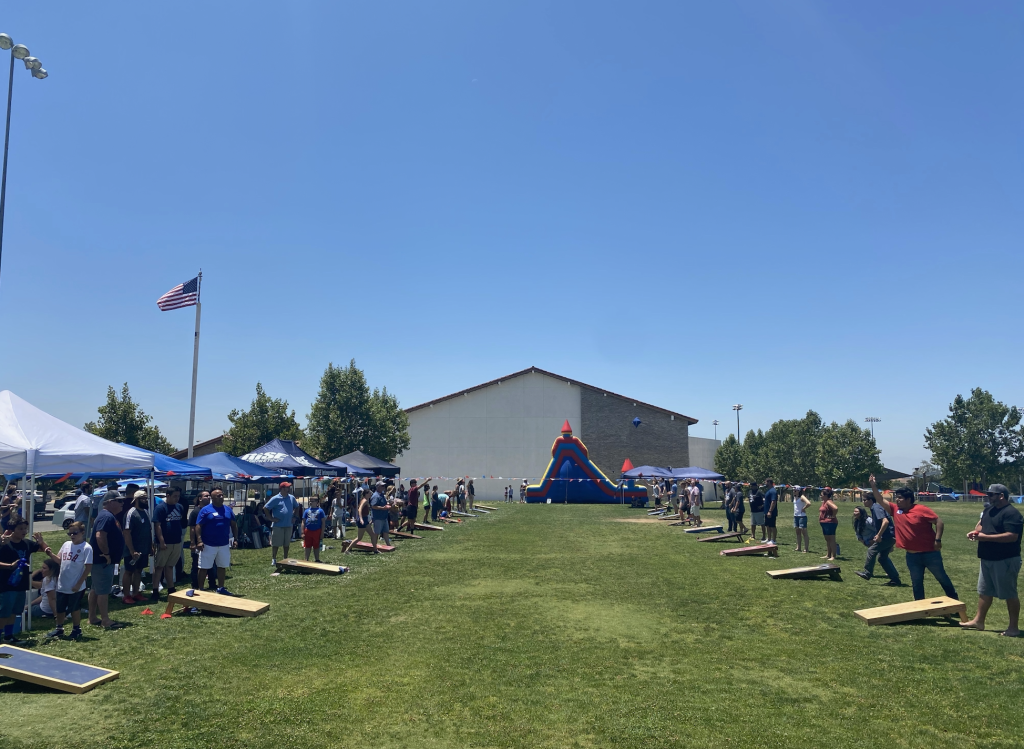 RIVERSIDE—Three post-COVID reopening events helped jumpstart evangelism at Orangecrest Community Church in Riverside, thanks in part to an evangelism grant from the California Southern Baptist Convention.

“These outreach events gave our church family a chance to rally around evangelism and rally around the mission,” said Christina Machuca, Orangecrest’s outreach and volunteer director. “A lot of hands go into pulling off these events.”

With its CSBC grant, the church held two outdoor movie nights at a park last summer that drew 600 people each. Orangecrest also held a July 4 cornhole tournament that drew 200 people, including 30 who had never been to the church.

“People were just looking to get outside after being inside for so long,” Machuca said. “That’s why we strategically planned those fun, totally free to the community events … We capitalized on the excitement of California being back open again.”

The field was ripe for such events. During COVID-19 lockdowns, Riverside saw an influx of new move-ins fleeing the higher housing prices in Los Angeles and Orange County. Many of those new residents hadn’t gotten to know their neighbors or connected with new friends in the area. Orangecrest sought to reach those people as it resumed in-person, indoor worship for the first time in over a year at Riverside’s Orange Terrace Community Center.

The events have “drawn in people who were looking for a place to connect,” Machuca said. “After COVID, people were just really hungry for connection.”

After initial success with the outreach events, Orangecrest wondered whether the gatherings would have a lasting impact. Would playing cornhole or attending a movie night translate into church attendance?

The answer proved to be a resounding yes. Several families came to the church during the season of outreach, with some making first-time commitments to Christ.

One of the movie nights drew a pregnant woman who had seen signs for the event while walking in the park. Her family had just moved to the area and was not attending church. She plugged into a small group as she forged relationships at Orangecrest. Eventually, her boyfriend—who said he would not go to church—began attending the small group with her.

Today, Orangecrest’s worship attendance has grown to an average of approximately 550. Easter Sunday drew 818. The church is in the construction phase of its first permanent facility after functioning as a mobile congregation since 2008.

Jason Blankenship, CSBC Evangelism Initiatives Team leader, said grants like the one received by Orangecrest contribute to a key objective of the convention’s evangelism team: “to help churches be intentional about accomplishing their evangelistic mission by taking initiative.”

The evangelism grant provided the boost Orangecrest needed at its COVID relaunch.

“The grant allowed us to buy up the reopening opportunity,” Machuca said, “and engage our community with the gospel.”