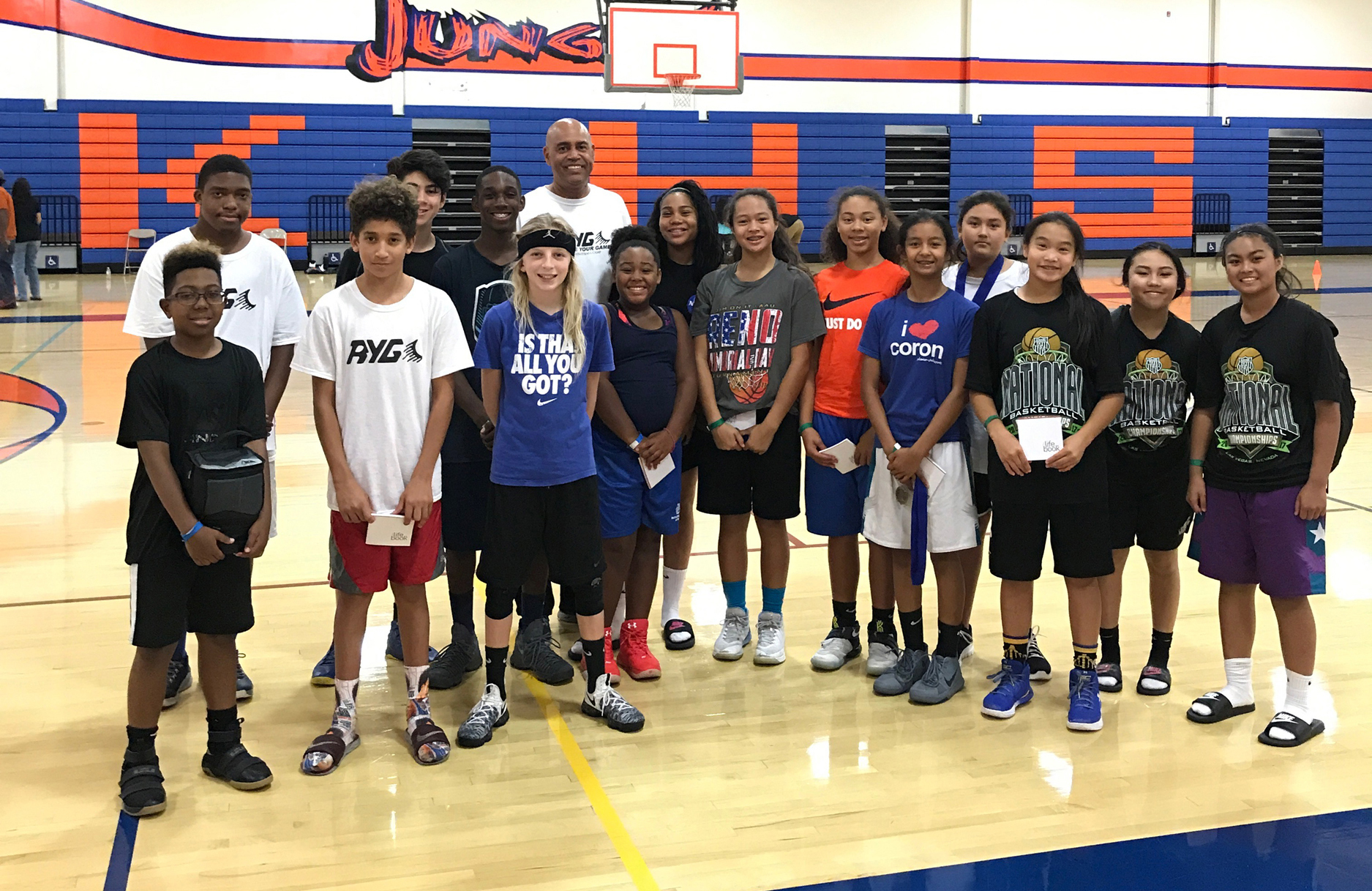 They walked through the wrong door and into the gym, where a basketball camp organized by Kevin James, pastor of New Creation Bible Fellowship in Tracy, Calif., was taking place. Purcell wanted to stick around and participate.

“So we gave him a T-shirt, and he became a part of it,” James said. “On Sunday he came to church, and on Sunday she made a decision to join the church.”

That was just one of the results of the second annual Raise Your Game Basketball Camp July 25-26. Fifty-one youth attended the two-day camp, and James said 25 of them made decisions for Christ after hearing testimonies from professional players and a gospel presentation.

“That’s how we impact our community,” James said. “The whole focus of our ministry is our children and our youth.”

Speakers at the camp included Kenny Thomas, who spent 11 years in the NBA with the Houston Rockets, Philadelphia 76ers and Sacramento Kings, and others who have played professional basketball overseas, including Brandon McKnight, Cedric Moodie Jr., Alejandro Thomas and Alexis Govan.

James partnered with John Murray of Murray Athletic Development in San Francisco and Brett Brungardt of Basic Athletic Measurement in Seattle to hold an NBA combine — type of camp — the same combine the NBA does for college seniors who enter the NBA draft, James said. The middle school and high school players were evaluated and tested on different basketball skills and received professional instruction to help them develop as players.

Jordan Richardson, a member of New Creation Bible Fellowship who played basketball collegiately at Weber State University, served as director of the camp.

“Basketball has been in my background ever since I was 3 years old,” Richardson said. “I just wanted to give my knowledge back to the kids, and this was the perfect opportunity for me to do that.”

Richardson said he was pleased with how the students of different ages and abilities interacted with and encouraged one another during the camp. Rather than belittling those who weren’t as strong on the court, the better players often encouraged them, Richardson said.

He was also pleased with the number of kids who professed faith in Christ.

“Basketball is very, very small,” he said. “They have to learn that they need their faith in Jesus Christ to go on with their life.”

While participants pay a small fee to offset some of the costs, James said money is not the driving force behind the camp. Concessions are sold during the two days, with James donating the money to the school.

“I’m not in it to make money,” James said. “I’m in it to save souls. That’s my whole focus of it, to get these kids in, have them hear some testimonies about God, let them hear the gospel message, and then prayerfully, as I pray the whole time, that some of these kids will raise their hand.”

Many of the kids at the camp could be considered “at-risk,” James said, and don’t often get opportunities to take part in such activities as the Raise Your Game camp. He was thrilled to see them excited about learning the game of basketball and express interest in coming to more camps in the future.

“That’s more opportunity for us to disciple them, to engage them, to share Christ’s love,” James said.