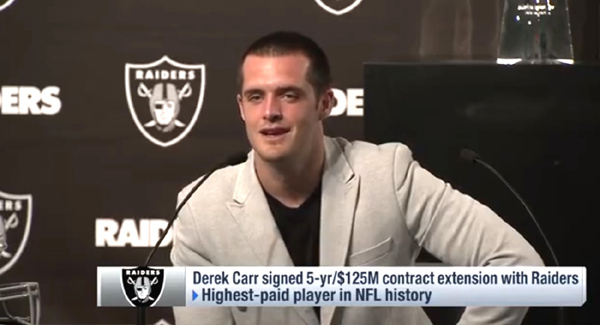 NASHVILLE (BP) — When Oakland Raiders quarterback Derek Carr signed a contract extension making him the highest paid player in NFL history, he was quick to identify one of his top priorities — tithing.

“The first thing I’ll do is I’ll pay my tithe like I have since I was in college getting $700 on a scholarship check,” Carr said at a June 23 press conference following the signing. “That won’t change.”

Carr and the Raiders agreed to a five-year, $125 million extension that will keep him in silver and black through 2022.

“First and foremost, I’m just blessed and honored to be sitting here today,” Carr said in his opening comments at the press conference. “I dreamed of this day when I was a little kid, and it’s here. I just thank God for this opportunity.”

An outspoken Christian, Carr said he was excited about the contract because he wanted to continue playing for the Raiders, and because of how he and his wife Heather would use the money.

“This money’s going to help a lot of people,” he said. “I’m very thankful to have it, that it’s in our hands, because it’s going to help people not only in this country but in a lot of countries around the world. That’s what’s exciting to me.”

The Raiders drafted Carr out of Fresno State in the second round of the 2014 draft. In three seasons with the team, Carr has established himself as one of the league’s elite passers. In 2016, he led Oakland to a 12-4 record with 3,937 passing yards, 28 touchdowns and only six interceptions.

His older brother David also played quarterback at Fresno State and was the top pick in the 2002 NFL draft by the Houston Texans. David retired from the NFL after the 2012 season.

Though he grew up in a Christian home, it wasn’t until college that Carr began to take his faith seriously, thanks mainly to a letter he received from Heather. They were just friends at the time, but Heather confronted Carr about his profession of faith that didn’t match up with his actions.

“He would say one thing but act the opposite way,” Heather said in a video produced by The Increase, an organization that shares the Christian testimonies of professional athletes. “He was talking about God and how much he loved God, and then I would see him going to the parties, hanging out with the girls.”

That letter from Heather was a wake-up call to Carr. He repented of the way he had been living, told his teammates that he had done a poor job of living the Christian life and pledged to be a better example to them going forward.

Lorne Bell, the area representative for the Fresno County Fellowship of Christian Athletes, was a teammate of Carr’s for two years and was there when Carr made that confession to the team in 2009. Bell said Carr apologized and asked his teammates to help keep him accountable in his relationship with Christ.

“This guy is real,” Bell remembers thinking. “I’ve seen that continue since he graduated. I know that Derek’s faith is genuine. He really loves the Lord. It’s not fake. It’s not for the cameras. God is number one in his life.”

Carr and Heather eventually began dating and then married in 2012.

Carr, whose grandfather was a pastor for more than 40 years, has a tattoo on his left wrist with the Scripture reference Jeremiah 29:11: “‘For I know the plans I have for you’ — this is the LORD’s declaration — ‘plans for your well-being, not for disaster, to give you a future and a hope.'”

On his website, Carr says he wants to use football as a means of glorifying God and sharing his faith with others.

“Football is God’s gift to me and I am thankful he chose me to be the steward of this gift,” Carr writes. “Being a quarterback is what I do but it does not define who I am. I am first and foremost a follower of the Lord Jesus Christ. Each time I step out on the field I play my heart out for the Lord.”