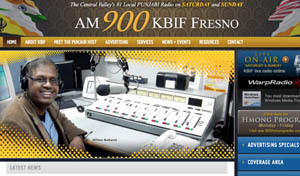 Radio still a tool in the evangelistic toolbox

FRESNO – In an age of Spotify, Pandora, on-demand television, DVRs and Netflix – nearly all of it accessible on nearly any computerized device of any size – radio can seem positively quaint. Outside of the daily commute, who listens to it anymore? And why on earth would it be considered a valuable evangelistic tool?

Before you dismiss it out of hand, consider these two stories: a one-hour-per-week radio show designed for South Asian Indians, which yielded 150 phone calls from listeners and one Indian church planter in just 15 months; and a similar show for Italians, begun in 1954 – 1954! – and continuing to this day.

Both are examples of how California Southern Baptists have reached out to the microcosm of the world that is the Golden State.

“One week, I was talking about a parable of the one lost sheep,” explained William Nathaniel, who hosted and recorded the one-hour Sunday afternoon program. “While the program was running, a man called me – Punjabi, not a Christian – and said, ‘I am listening to your program. What surprises me is God is searching for us; it is not us searching for God.’ Another caller said, ‘I listen because it gives me a lot of peace.'”

Nathaniel said he received two or three calls each week during the program, and to each caller he sent a copy of the Gospel of John.
“How many of those callers became Christians?” he asked rhetorically. “I don’t know, but I know seeds were planted. I know we had listeners on the East Coast, in England and in India” through online streaming.

The high point occurred about six months after the program began, when an Indian believer came forward with a vision for church planting among Indians in the Fresno area. NorthPointe Community Church adopted this church planter, George Masih, who has baptized one new believer and now has more than 20 who come to worship, most of them non-believers. He also coordinated a concert of an Indian gospel singer that drew more than 200 Punjabis.

The Fresno metro area alone has more than 14,000 South Asians, primarily from northern India. Santa Clara County has about 80,000; the Bay Area overall is home to about 350,000 South Asians. There are more than 700,000 in all of California.

The radio station – KBIF 900 AM – offers programming in Punjabi and Hindi every weekend; the only evangelistic program, called “Sat Sandesh” (“True Message”), aired on Sundays from 1-2 p.m. It included music, a testimony, Bible reading and a short message from Nathaniel. He and his wife produced the recording; their eight-year-old son happily provided the station identification “segment.”

“It’s not on the air anymore, as of January of this year, because I couldn’t get the money for it,” explained the former North American Mission Board-sponsored missionary, who was one of the casualties of NAMB’s recent reorganization of field staff. “I feel sad that the organization has missed this possibility. This isn’t a multi-billion dollar business; it’s just seeds that are planted, that take time.

Radio, of course, has been employed as an evangelistic tool since its inception. And 60 years ago it was picked up as such a tool by Amelio and Lidia Gianetti, believers and native Italians who settled in San Francisco in the early 1950s. They began the “La Buona Novella” (“Good News”) program on July 4, 1954, as one effort to reach the thousands of Italians in the Bay Area.

A year later, they received a call from Eros and Carla Bacoccina.
“Lidia and I became good friends (with them),” Amelio wrote in his memoir, “It All Began in Rome.”

“(Catholics) read the Bible but had various questions. This was before Vatican II, when reading the Bible independently was not encouraged and Mass was said only in Latin.”

After some time, the Bacoccinas became believers, and when Amelio and Lidia were appointed as Southern Baptist missionaries to Brazil, Eros and Carla took over the radio program.

Carole Hester, a member of Crossroads Christian Church in Ukiah, remembers those days.

“My mom (Orine Suffern) played the organ, Amelio’s wife sang, and that’s how they preached and did music and teaching. Eros recorded it in his garage. I babysat the children.”

“Fifty-seven years later I am amazed at what God has done through Eros and Carla!” Amelio wrote. “Not only did they organize an Italian church in San Francisco and continue La Buona Novella, but Eros is the only Italian-speaking evangelical who is heard over the airwaves in five continents!”

Hester said Eros continues to be contacted by Italian Catholics from all over the world, who “want to know more about Jesus.”

Apparently radio – that mass communication throwback to the 19th century – continues to have a place in the evangelistic toolbox, and will continue to as long as it draws listeners to a new or deeper relationship with Christ.