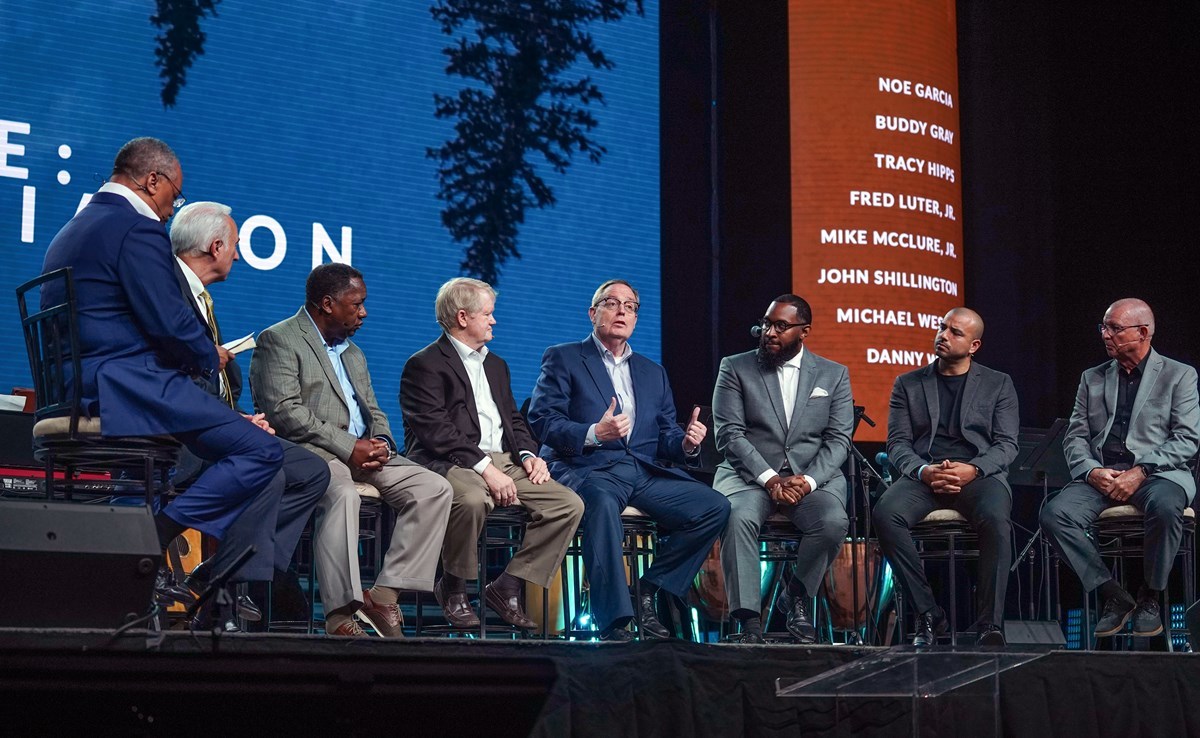 BIRMINGHAM, Ala. (BP) — Fostering relationships among fellow pastors and church leaders was the theme of a panel on day two of the Pastor’s Conference of the Southern Baptist Convention’s annual meeting on Monday (June 10).

The panel was moderated by former SBC President Fred Luter Jr., pastor of Franklin Avenue Baptist Church in New Orleans. Luter noted that the three goals of the panel were to “encourage you in your field of ministry, challenge you to do more in the area of racial reconciliation, and to inspire all of us to strive to make our churches, ministries and our communities on earth what heaven is going to be like.”

Panelists shared how racial reconciliation began in Birmingham with the story of McClure, an African American pastor, and Buddy Gray, pastor of Hunter Street Baptist Church in Hoover, Ala.

Gray, who is white, had a previous relationship with McClure’s father, also a pastor in Birmingham, and so McClure reached out to Gray for advice in ministry. The two had developed a relationship when tragedy struck the community.

On Thanksgiving night 2018, there was a shooting in the Galleria Mall in Hoover, when a 21-year-old black man was shot and killed by a police officer. The shooting resulted in protests in the Birmingham community, causing a decrease both in business for the mall and work for the employees.

McClure and Gray responded by forming a group of pastors known as Pastors for People, a group of 130 black and white pastors in the Jefferson County area who raised more than $30,000 dollars for employees at the mall.

The money was used to buy groceries for employee families as well as Christmas gifts for employees’ kids — and even a week’s worth of pay for some employees.

Gray said that the partnership that he was able to form with these African American pastors required a sense of both humility and teachability.

“The thing that I had to admit was that I was pretty ignorant,” Gray said. “It’s one thing to listen, but it’s another to learn and then you lead people. When we started loving each other, things started to change in our community.”

Hipps, who is white, remarks that unlike the first example of reconciliation, this story came out of a time of peace and not turmoil. It was simply an example of two church leaders of different ethnicities wanting to build a relationship with each other and sharing a common mission and vision.

“Relationships can be built if pastors want to talk with each other and not to somebody,” Hipps said. “We need to do it with each other, and become one united common entity. Over time it will happen because you get to know each other’s hearts, not just what the color of their face is.”

Wesley added that “it’s never been about anything but just the Gospel, mission, relationship and staffs learning from one another.”

Garcia explained that the Phoenix area was a highly diverse area, but the church was nearly 90 percent Anglo, and as a Hispanic, he was the only non-Anglo on the church staff.

Through gradual changes in the church’s ministry over time, such as offering different styles and languages during worship, the church became one of the most diverse churches in the country, split nearly 50-50 between Anglo and non-Anglo members.

Garcia added that a key to defeating the problem of racial tension is to admit that there is a problem and genuinely give different ethnicities a voice.

“If something is going to be reconciled, one or both parties have to recognize that there’s a problem and there’s something broken,” Garcia said. “You can have a seat at the table, without having a voice to really speak into the future.”

Garcia asked pastors and church leaders to veer away from tokenism, but toward developing leaders of all different ethnicities for the next generation.